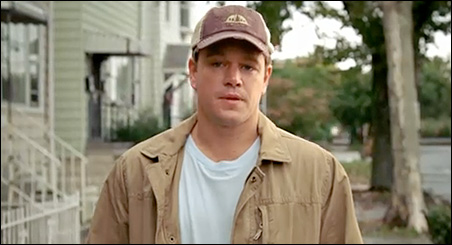 One of these nights, in the wee hours when local television broadcasters can fit it into their scheduling, you may see Academy Award winner Matt Damon in a 31-second public service announcement playing a real and jobless Minnetonka man not too proud to admit he and his family use their local food shelf.

That symbolic everyman is Steve Gallagher, married, the father of two girls, and, along with his wife, jobless for two years.

“I’m the face of middle-America, the middle class who is now down to poverty. I’m looking for work. I’m applying for 50 to 100 jobs a week and not getting any bites,” said Gallagher, who was laid off from a job in shipping and receiving with a small medical company that was sold off in parts in 2008.

Pictured at the front door of a house in Queens, N. Y., and dressed in a billed cap, white t-shirt and cloth jacket, Damon starts out saying, “Hi, my name is Steve. Recently things got so tight we had to go to our local food bank for help.”

Damon says a few more lines, then turns to Gallagher off-camera, saying: “How’d I do, Steve?”

Gallagher, dressed just as Damon, ambles into camera range. Their exchange ends with a touch of humor before a serious masculine voice encourages Americans to “Play a role in ending hunger. Visit www.feedingamerica.org and find your local food bank.” Translation: donate.

You can also see the full ad below.

The PSA, a collaboration of Feeding America, a hunger relief organization, and the nonprofit Ad Council, is aimed at motivating Americans to get involved in the fight against hunger, done pro-bono by Cutwater Advertising, a San Francisco agency. Broadcasters donate on-air time to show it. Ben Affleck stars in another one of the “everyman” series of promotions distributed to media channels and online.

Stereotype of the past
The goal is to put a real face on hunger, explains Heidi Arthur, senior vice president at the Ad Council.

“The whole strategy of the campaign is to make people aware it is not the stereotype of hunger of the past. It’s hard-working people in the community, it’s children, it’s the working poor. The whole idea is that this is closer than you think. It’s 1 in 6 Americans,” Arthur said.

Fame knocked on his door when Gallagher was visiting ICA Foodshelf, the Minnetonka food bank he and his family sometimes use. “They were looking for someone to tell their story. I was willing to tell my story. As long as it helps one person, it’s fine.” The family has utilized other community resources, including receiving toys and warm winter wear.

Gallagher receives unemployment insurance, but “I’m probably on my last leg of it right now,” he said. The family is “barely” holding on to their home.

When they were both working — his wife, Treva, was laid off from a job as a preschool teacher in a daycare setting—the Gallaghers used to pull in between $48,000 and $60,000 with benefits.

“Now it’s down to about $15,000,” he said, acknowledging that for most jobs he’s “overqualified and yet under-educated.” He has some college but not a degree, yet years of fundraising experience as a volunteer for Hopkins’ Raspberry Festival.

Yet, even fundraising jobs he can’t get, absent that college degree. “C’mon, you don’t need a four-year degree to get money from people. You’ve either got the knack or you don’t have the knack,” he insists.

It took courage to walk into their local food shelf to ask for food that first time, he said, admitting to overcoming the “stigma” of asking for help.

Since, the family visits the food bank regularly for ” milk and lots of canned stuff and little bits of meat,” though his children’s food allergies and his wife’s diabetes sometimes means they can’t use all the food offered.

“It takes a lot to admit you need help,” Gallagher said.

Already, his five minutes of fame has led to his being flown to New York City to do the piece with Damon. Daughter Katie, 15, makes a cameo appearance in a related PSA with teen actress Abigail Breslin, but it hasn’t been released yet. Daughter, Olivia, is 10. There’s also talk of the family being interviewed on CBS.

Often, Gallagher is disheartened. “With a guy like me with thousands of connections, I can’t find work. I can’t find work to support my family,” he says, still finding that fact unbelievable.

Yet there are sunny spots in his life. Sometimes the family comes home to find a grocery store gift certificate stuck on the door by an anonymous donor. They’re doing for him, Gallagher says, what he used to do for others.