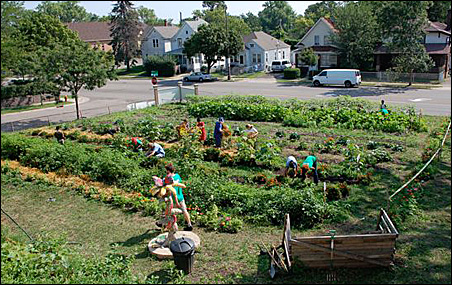 MinnPost photo by Marisa Helms
Like the Victory Gardens of the 1940s, growing spaces are cropping up in empty spaces to grow and share food.

From fertile seeds, a big idea is growing.

Nobody knows exactly where it began, but Barb Prokop and Maggie Lindberg of Guardian Angels Catholic Church in Oakdale surely had a hand in it. Now this Good Samaritan effort some say has its roots in those Victory Gardens grown during World War II seems at the tipping point.

Here’s what we’re talking about.

At a church retreat years ago, the women — some call them gardening angels — came together and realized a shared passion for not only gardening but also social justice. The result was the church’s gardening ministry, now in its 17th growing season.

Last season, with their direction, 300 church and community volunteers tilled, planted, grew and delivered a record 11,058 pounds of just-harvested tomatoes, cucumbers and 18 other veggie varieties to emergency food shelves in the St. Paul area.

All those years in between the two women have hawked the idea to others but it wasn’t until the downturn of the U.S. economy, says Prokop of Woodbury, that this idea of tilling the soil to help the needy seemed to take a firm hold, fueled by human need and the Golden Rule.

“It just seems like we’ve hit this critical mass and now it’s just taking off,” says Prokop of a local war-against-hunger kind of effort. Like those millions of Victory Gardens of the 1940s, growing spaces are cropping up in empty spaces and backyards, on company and church lands, to grow and share food.

Churches, communities of all kinds and neighborhoods are signing on, even school districts, committing to donate at least a percentage of food they raise to those in need. Most everybody I talked to knew of someone else organizing or talking about organizing a green thumb effort.

Her program also supports grow-and-share efforts on church lands or back yards, she told about 30 gathered to learn how fresh-picked beans or cucumbers or beets or carrots could ease food problems.

‘Share Your Produce’ panel
For the first time Gardening Matters, a non-profit that promotes and supports the coming together of friends or strangers to garden, is presenting a “Share Your Produce” panel at its Community Garden Spring Resource Fair Saturday, April 2, an event expected to attract more than 600 people.

The panel, says Gardening Matters education and outreach coordinator Margaret Shields, is aimed at people who are growing produce to give to those less fortunate. “There are more community gardens out there and more are trying to look at how to meet the needs of their community,” she said.

This year, says Jon Addington, garden coordinator and church member, they’re going to till up more, tripling the garden space to about 1,000 plots. They’ll reach out to new immigrants, including the Karen, a people with agriculture traditions, who came from Thai refugee camps to settle in Minnesota.

In addition, some of the land will be set aside as a “giving garden” where church volunteers raise crops to go directly to food shelves.

“From our perspective the land is a gift from God and it is an opportunity for us to share,” Addington says.

For years her agency has gladly accepted produce from what she calls an “amazing garden… I mean blocks and blocks” from Guardian Angels, as well, she says, the freshly-grown product from other green-thumbed individuals, area orchards and farmers. Some gardeners even bring in plants to share so food shelf clients can grow their own edibles.

It means her clients are able to get vegetables fresher than they ever would from a store and the free produce means her organization can stretch its food-buying dollars farther.

Last year her agency served 26,000 people, compared to 13 years ago when she started with Friends in Need and they opened their cupboards to 3,000 a year.

The need, Rageth says, won’t go away soon. “I hope it levels off at least. It’s gonna take a while, even if unemployment goes down. They’re going to have to work themselves out of debt, what they borrowed from family and banks. It’s going to take a while.”

City land used
Other grassroots efforts include the outreach of about 20 civic-minded women calling themselves Newport on the Move. They jumpstarted a collaborative effort with their city to open three plots of city land to raised-bed gardens this spring and summer, with some space for “giving gardens.”

“We all want to grow vegetables and fruit if we can at some point for local food shelves and the elderly who can’t afford to get fresh produce,” said Mary Beth Kowalenko, a volunteer in the group and a floral designer and landscape designer.

Lindberg and Prokop brought gardening training and experience to the Guardian Angels project, but the church garden’s vegetable yield increased over the years with the input of so many and the construction of an eight-foot tall fence to keep wandering deer out of the field. Also, parishioners donate from home gardens as well, to increase the church’s donation to food shelves.

Yet even smaller efforts can add up. Gardening to raise food shelves on empty church land, for instance, is a great idea, Nelson-Pallmeyer says, building relationships and filling stomachs, but so is bringing in those few extra vegetables from your home garden and donating them to food shelves, she says.

You start out, she says, thinking, “Well I’ve got six extra beets. That isn’t really going to go anywhere, but wait, if I pool mine with other people from church or people I work with, then it feels like a worthwhile donation.”