Take the concept of “other.’’

Really, I’m asking you to consider the word, what it means and how it divides, as does Wing Young Huie, an intriguing Minneapolis photographer and documenter of everyday life.

Huie, a native Minnesotan and the first non-immigrant in his family, uses his camera to coax people to think of “otherness” in America, a society polarized by differences in race, gender, age, sexual orientation, wealth and well …lots of things.

Born to parents who came to the United States from China and growing up in Duluth, he knew firsthand “otherness.’’ People would ask him, “Where are you from?” and he’d answer, “Duluth.’’

But they’d persist, “Really, where are you from?”

Huie, 58, uses his photography of south Minneapolis as a social catalyst, a way to build community along and on Chicago Avenue, a racially diverse area perhaps more often known as a symbol of what people lack rather than what they have. Poverty runs high here by government standards.

With his pictures, Huie (pronounced “huey”) draws together blacks and whites, Jews and Muslims, the healthy and the ill, young and old, friends and strangers. His art helps people break through barriers, or as he calls them, “bubbles,” of otherness, he says.

To that end 100 of his photographs are posted in 19 businesses fanning out along a 10-block stretch of Chicago Avenue from 32nd Street to 42nd Street in a public art exhibit called “We Are the Other.” A similar effort includes his “University Avenue Project,” a public art project in 2010 along the light rail line in St. Paul.

His work is one spoke in a wheel of the bigger Arts on Chicago initiative involving a slate of artists and designed to foster and develop community in four Minneapolis neighborhoods: Powderhorn, Central, Bancroft and Bryant. A community celebration with a series of events is planned for June 8.

Gap between perception and reality

A shooting on a neighborhood street corner drew negative media attention in April.

Say Huie: “Often these urban neighborhoods are viewed by crime rates. If you view the area through this filter, the perception is perpetuated. Certainly it’s a factor. Part of what I’m doing is trying to understand the gap between perception and reality… and what are the consequences.’’

A quiet man, he says he makes his living talking about his art rather than selling his photographs. He gives lectures and leads workshops, calling himself a cultural diversity speaker. 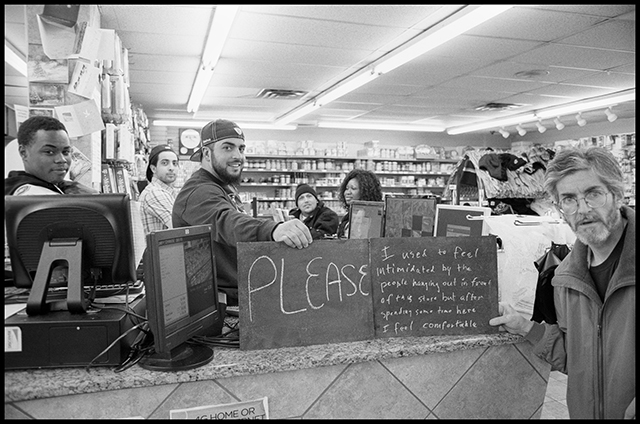 I am struck by his calm and politeness, which likely explain the success of his undertaking. He invited strangers to participate, asking them to introduce themselves to one another and then started clicking. The result is photos demonstrating coming together.

His photos are striking and memorable: a woman and child slouched on a bench waiting for a bus, children of many races playing outside a church, a man who knits talking with a man who fixes auto bodies.

A journalist by training, he says he has no favorites among his photos. “I think of it more as a symphony and all the photographs have roles in the symphony,’’ Huie tells me in The Third Place Gallery, his Chicago Avenue showplace and social space, a photo-lined and windowed room where he hosts social events to bring the community together through art.

People “come in, they do the walk-through. Some take pictures’’ of the pictures, says Samir Abumayyaleh, one of the owners, who tells me he has built a mosque in memorial to his parents in the ground level of the building.

The photo project, Abumayyaleh says, brings the community together. 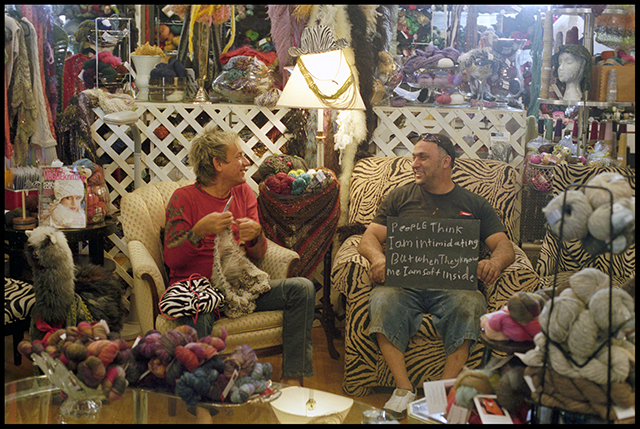 The effort is led by Pillsbury House and Theatre, Upstream Arts, the Powderhorn Park Neighborhood Association and Minneapolis College of Art and Design professor Natasha Pestich with support from Minneapolis Ward 9 Council Office of Elizabeth Glidden. It is funded partly by Artplace.

Huie kicked off the project by walking across Chicago Avenue from his gallery to meet and take pictures of Hai Long Huynh, the owner of Tip Top Haircut.

Though language was a deterrent, as Huynh’s English is somewhat limited, art was a bridge to communication. They’ve forged a bond.

Minneapolis photographer uses his camera to bring diverse community together