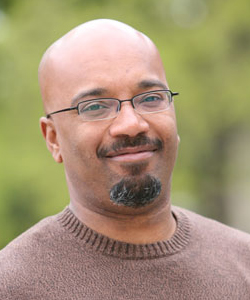 Walter R. Jacobs III is known for sporting maroon and gold colors on Fridays, except for the days he has important meetings.

A longtime professor at the University of Minnesota and a die-hard Gophers fan, Jacobs is also known for his leadership role in redefining the university’s African American and African Studies Department.

On top of teaching and publishing academic works, the associate professor has dedicated his time and energy to the academic and personal growth and development of those who sought his assistance.

Andy Wilhide, a graduate student at the University of Minnesota, and her Sheeko project team took note of Jacobs’ commitment to helping others. (Sheeko is a digital storytelling project featuring the lives of Minnesota immigrants in the Immigration History Research Center.)

“He volunteered to train us in digital storytelling skills,” Wilhide said of Jacobs. “He met us on weekends to do this.”

When the University of Minnesota opens its classrooms for the fall semester, however, ever-smiling Jacobs won’t be on campus. Instead, he will be sitting in an office more than 370 miles away from Minneapolis where he will be the founding dean and professor of the College of Social Sciences and Professional Studies at the University of Wisconsin-Parkside.

Jacobs was one of four black students of Atlanta’s Benjamin E. Mays High School, a magnet school program with a student body of 1,600 that capitalized preparation for math- and science-related careers.

Unlike for many of his peers, Jacobs said, education was very important to him. His mother, Elaine, and father, Walter R. Jacobs Jr., were both college graduates, and instilled the value of education in Jacobs and his younger brother, Keith. The family lived in Cascade Heights, an upper-middle-class African-American neighborhood in Atlanta.

Despite his positive view of education, Jacobs tried to give the impression that he wasn’t serious about education when he was with friends and classmates. To prove this, Jacobs joined a group of four students who named themselves “PSI-Inc,” which stood for “Potential Stupid Intellectuals, Incorporated.”

“We gave ourselves that name,” he added. “It was important to state that and let people know that we weren’t taking school too seriously, even though it was deadly serious for us.”

After graduating from high school in 1986, Jacobs attended Georgia Institute of Technology, earning a degree in engineering, thanks to recruiters of a program that gave full-ride scholarships to students of color interested in math and science.

When he completed undergraduate education in 1990, Jacobs worked as an electrical engineer at the Department of Defense. Two years later, he developed an interest in how society functions.

“I was interested in trying to figure out my co-workers — how they thought and what they thought about politics and society,” he said. Though an engineer, “I was doing sociology informally.”

Jacobs spoke with professors at Indiana University’s department of sociology, figuring that he had the sociological imagination and what it would take to make it in the field.

He left the engineering job in 1993 to pursue a full-time Ph.D. program in sociology at the university.

Road to the University of Minnesota

When he completed his Ph.D. education in 1999, Jacobs sent a total of 63 applications to inquire about teaching jobs at universities around the country. The University of Minnesota became one of several schools that called Jacobs for interviews.

Eager to make the Twin Cities — where he fell in love with as an engineering intern at 3M — his new home, Jacobs accepted in 1999 an assistant professor post at the University of Minnesota’s General College, which became the Department of Postsecondary Teaching and Learning in the College of Education and Human Development (CEHD) in 2006.

Wilhide, a mentee of Jacobs called him a caring and inspiring educator.

“He’s a mentor figure,” Wilhide said. “He was very encouraging and supportive in helping me see beyond just getting my dissertation.”

Wilhide praised Jacobs for his unique ability that sets him apart from other educators: he is thoughtful about helping others get through any stage of their educational career.

“That’s why a lot of people in different departments think highly of him,” she added.

Jacobs was tenured and promoted to associate professor in 2005. Two years later, he transitioned to the College of Liberal Arts to be chair of African American and African Studies.

He served as chair from 2007 through 2012, managing an annual budget of $1.3 million used in operating the department’s academic unit.

Jacobs takes pride in many success stories he played a leading role in during the 14-year period he spent at the university.

Jacobs said that he’s proud that he was part of revamping courses in the Department of African-American and African Studies to avoid overlapping classes. Jacobs added that he also worked on streamlining the major so students can get through it more easily and quickly.

Four years ago, Jacobs co-established the Morrill Hall and Rachel Tilsen Social Justice Fund, a program that gives out awards to people in the community or students who do social justice work.

Jacobs said the program recently celebrated its fourth birthday, giving up to $4,000 in awards. The program made about 10 awards in the past four years, and two have been to students.

“They lived together, took classes together and had social lives together,” Jacobs said of the students. “They had lots of support. We made sure they were doing well.”

Jacobs is a 2009 University of Minnesota Arthur Motley Exemplary Teaching Award winner, and a recipient of the Department of Sociology Teaching Excellence Recognition Award and a Lieber Memorial Teaching Associate Award while a graduate student at the Indiana University.

“As the department continues to grow and evolve,” he said, “they can do something to alleviate those types of issues and bring the Somali students and African-American students together.”

Jacobs’ new duties at UW-Parkside will begin July 1. Fred Ebeid, UW-Parkside provost and vice chancellor, said in a statement that appeared on the school website that Jacobs will bring solid knowledge and experience to the university.

U professor in African studies department named dean at UW-Parkside