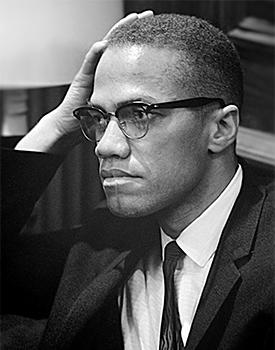 Library of Congress
Malcolm X before a 1964 press conference.

Thandisiwe Jackson-Nisan thinks Malcolm X’s political legacy doesn’t get enough recognition. She’s hoping to change that. “We hear about Martin Luther King a lot but we don’t hear as much about Malcolm,” she said. “I’ve met children who’ve never heard who Malcolm X was.”

This Saturday, Jackson-Nisan along with a handful of other Twin Cities’ civil rights activists and community members are hosting the third annual Minnesota Malcolm X Conference to celebrate the civil rights leader’s life and discuss his ideas and philosophies.

This year’s conference, being held at Minneapolis North Community High School Booster Club in north Minneapolis, will focus on the Organization of Afro-American Unity — an African American civil rights organization established by Malcolm X shortly before his assassination in 1965. The event will feature a discussion with a panel of Twin Cities black leaders and activists, followed by a series of workshops and performance art.

“I’m super excited about it,” Jackson-Nisan said. “This is to honor and reflect on the political legacy of Malcolm X.”

People tend to get caught up in Malcolm X not endorsing non-violence like MLK, Jackson-Nisan said, which is why she believes people tend not to celebrate him as much. But as a civil rights leader, and a contributor to African American heritage, she said, his beliefs are still very much at the forefront of today’s civil rights activism.

Nekima Levy-Pounds, a St. Thomas Law Professor and president of the Minneapolis chapter of the NAACP, said Malcolm X was unapologetic when he spoke about giving power back to the black community, both with his actions and words.

She believes his teachings and mantra of “By any means necessary,” have influenced many civil rights activists’ work today, including her own. Levy-Pounds has participated in several high-profile demonstrations over the last few years, including disrupting freeway traffic, shutting down the Mall of America and occupying the land outside Minneapolis’ Fourth Precinct Police Station for three weeks after the shooting of an unarmed black man by police.

Just last week, Levy-Pounds interrupted a private Minneapolis Parks and Recreation Board retreat because she felt the group wasn’t addressing her concerns over what she calls unfair hiring and disciplinary practices against people of color within the department.

She thinks Malcolm X would have done the same if he were alive today. “It’s important to disrupt the status quo, to speak truth to power, and to disrupt business as usual,” Levy-Pounds said. “Sometimes that means showing up in sacred white spaces.”

Michael McDowell, an organizer with Black Lives Matter Minneapolis, said the act of taking power back, whether received positively or not, was at the heart of Malcolm X’s teaching and is something their movement has also prioritized. “He was unapologetic about talking about black power and building black power,” McDowell said, “and that’s something that we’re pretty explicit with in the Black Lives Matter movement.”

Mel Reeves, a longtime Twin Cities civil rights activist and a speaker at this year’s conference, said Malcolm X also argued for economic equality and likely would support activists fighting for a $15 an hour minimum wage in Minneapolis. “He was against capitalism,” Reeves said. “The idea of profits over people.”

Reeves said he sees the conference as a chance to spread the word about Malcolm X’s less talked about views and how they might fit into our political discourses today — such as universal healthcare.

For McDowell, he’s glad to see the Twin Cities community making an effort to talk more about a figure who has contributed so much to the African American community and civil rights movement. “This conference is something that’s a blessing for Minneapolis because we haven’t had something that’s reoccurring that’s uplifting Malcolm X and his legacy,” he said. “It’s really important that he’s someone that’s talked about.”

The conference takes place on May 21 from 10 a.m. to 4 p.m., at the Minneapolis North Community High School Booster Club on James Avenue North. Admission is free and lunch will be provided.