Sergio Quiroz figures he’s been pulled over at least 50 times by police in the St. Paul area, but the last time was particularly memorable.

He was driving his 2002 Hyundai Elantra with his 18-year-old son, Sergio Jr, in the passenger seat, when motorcycle cop pulled him over on Arcade Street in East St. Paul at around 10 a.m. The reason given: taillight out. Two other squad cars came as backup. Quiroz could see the officers standing off to the side of his car with their hands on their guns.

He was afraid, but his safety wasn’t his only concern. The episode was a chance to teach his son, who is about to become a senior at St. Paul's Open World Learning Community, a lesson about how to stay safe, and how to stay alive, as a young Indigenous Latino man in the Twin Cities. “I tell my son, make sure they can see your hands at all times,” he said.  “Have them out so there is no mistake about anything. Nothing escalates. ”

To their left, Sergio saw an older African American man waiting at a bus stop. The man kept his eyes fixed forward, as if he couldn’t see the scene unfolding in front of him. “Look at this man,” he told his son. “Look at how afraid he is of the cops.”

The officer gave him his ticket and they moved on with their day. It could have been worse. At least, he thought, his son didn’t have to see the police laugh at him, like the cop who told Sergio “You can’t afford another ticket,” after checking his record.  And they hadn’t pointed a gun at his head, like the Minneapolis police had years ago, or made him get out of his car, like the time he had to stand with his hands on the trunk for 40 minutes, eyes fixed on the rear window, after he had the nerve to pull in front of a police car on I-94, near the Dale exit.

“As a father, I’m afraid, I’ve gotten stopped so many times,” he said. “We get used it. But my son, I don’t want him to have a lot of these experiences, like I have had my whole life from my youth until now.”

The same night he was stopped, July 6, Philando Castile was shot dead by a police officer during a traffic stop in Falcon Heights. Sergio woke up to see the Facebook video filmed by Castile’s girlfriend, Diamond Reynolds, depicting the grisly aftermath of the shooting. “It just took me back to when we got stopped the day before. At any point, when we got stopped, things could have gone wrong and this could have been me. This could have been my son.”

Later that morning, Quiroz went to the Governor's Mansion to join the protests that began the night of Castile’s death and continue to this day. But Quiroz isn’t one for chants or signs. He has a different way of protesting: An offering of ancient dances.

So he decided to come back with his group, Kalpulli Yaocenoxtli, which means Warriors of the First Cactus Flower in the Nahuatl language.  There were about 10 of them, dressed in traditional regalia,  including Copilli, the the feather headdresses in vibrant greens, yellows and reds, and leather or cloth belts with beadwork.

Quiroz is originally from Mexico but came to the U.S when he was 10, and went to Johnson Senior High School in St. Paul. He became interested in native Mexica/Aztec dance as a teenager in the 90s, as a way of reconnecting with his indigenous roots. He met his wife, Mary Anne, around the same time. She is Filipino, and was looking for a way to reconnect with her own indigenous background, but did not have access to traditional Filipino dances at that time. Dance was one of the ways they bonded, and they still dance together today. 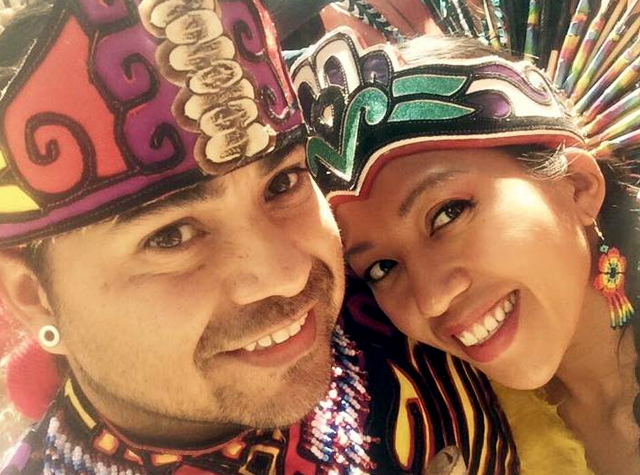 They had never planned on forming a dance troop, exactly; they saw their dance and their teachings as part of their way of life. The entire family —  Mary Anne, Sergio, their four children, and Sergio’s mother — liked to dance together at Phalen Regional Park in East St. Paul. The younger Sergio would play the drums, as he’s been doing since he was six. Other people saw what they were doing, and asked to join in. Word spread, and the group grew.

Then in 2007, the Ordway invited them to participate in the International Children’s Festival at Rice Park. The organizers called them “artists,” which offered a kind of validation they hadn’t received before. Just as importantly, the festival exposed them to a larger community of artists of color, which helped opened doors for collaborations and more work in the field.

Now, they have about 35 members from all over the metro area, with ages ranging from 2 (the Quiroz’s youngest) to 57. Most, though not all, of the members are Latino, with native roots.

They had danced at protests before, most notably during the occupation at the Fourth Precinct following the Jamar Clark shooting. As an indigenous group, they also supported Native Lives Matter, the group that has focused attention on police treatment of Native Americans, and organized protests in St. Paul in February after police shot and killed Philip Quinn, a 30-year-old man with a history of mental illness. They have also danced for immigration reform. There are about five other similar native dance groups in the area, and some also present dances (their preferred term, as they don’t consider themselves performers) at protests.

When Kalpulli Yaocenoxtli danced at the Governor's Mansion the day after Philando Castile, the crowd seemed moved. The chants stopped, for a few minutes, while the rattle shook and the sounds of drums filled the air.

They danced “Tletl,” or the fire dance. “Everything is heated. Everything is high emotion,” Sergio explained. “And we danced that with a lot of fire to feed folks that energy.”

And they danced the Tezkatlipoka, or the “smoking mirror,” which is a warrior dance about overcoming  internal struggle. “We all need to wake up our consciousness,” We need to waken as a community, as a united people,” Mary Anne said.

They also performed the Tonantzin, a dance that pays tribute to mother earth. “That is more because of his death. We are acknowledging that he is going back to the beginning. Back to the mother. To become part of the life cycle,” Sergio said.

Videos of Kalpulli Yaocenoxtli dances at the Governor's Mansion went viral on Twitter, and they made headlines. They have performed at several demonstrations since, including and at the I-94 shutdown on July 9, and at the demonstration by teachers unions Wednesday in downtown Minneapolis.

Among the thousands of people to watch them perform at the Governor’s Mansion following the July 7 March was Clarence Castile, Philando Castile’s uncle. “I thought it was very respectful for them to come and do their Native dance as an offering for my nephew, considering that they didn’t know Philando, but they offered him something that was sacred to them,” he said.

For Mary Anne Quiroz, that’s exactly how the dance was intended, an offering to Castile, his family and the activists supporting his cause. “For us, the dancing is sacred, and what happened to him is a tragedy, and what happen to our community is a tragedy,” she explained. “And we need to heal, and for us healing is through culture, art, through dancing, through singing,” she said. “It was our genuine offering. At that moment, we all held that space together. We all held safe space together, and supported each other.”