Three years ago, Anthony Newby scribbled his aspirations for Neighborhoods Organizing for Change on a napkin. His goals was for the organization, which organizes around racial and economic justice issues in Minneapolis: to raise $1 million and have a staff of 10.

That was in 2013. At the time, NOC was being run by Newby and one other part-time staffer, and such aspirations seemed like a pipe dream. “At the time it was sort of an absurd notion given where we were at,” Newby said.

Three years later, the organization is well on its way to reaching those goals, and more. Between 2012 and 2014, the group doubled its annual budget and has grown to employ 12 full-time staffers, dozens of part-timers and interns. It’s also enlisted more than a thousand members who contribute time and money to the cause. Earlier this summer, NOC opened up a second office in south Minneapolis for their expanding operations.

The financial and organizational growth has closely tracked NOC’s influence on public policy in the Twin Cities. Over the last several years, the group has become a significant player in many of Minneapolis’ most high-profile policy battles, including the repeal of the city’s lurking and spitting ordinance, the Minneapolis Working Families Agenda (including the passage of Minneapolis’ landmark earned sick-time law), and uniting several of the state’s civil rights groups under one legislative agenda to address Minnesota’s racial disparities.

Now, after a decision by the Minnesota Supreme Court earlier this week that ended a summer-long showdown over a bid to impose a $15 minimum wage in Minneapolis via a city charter amendment, NOC is planning what they call their biggest campaign yet, preparing to pressure the Minneapolis City Council to pass an increased minimum wage ordinance sooner rather than later.

“The conversation is not over,” said NOC Field Director Mike Griffin. “We will still run the largest grassroots campaign this city has ever seen … and we’re not going to wait until April to do it.”

Created in 2010 by a handful of organizers and former board members of the progressive group ACORN, NOC’s initial goal was to tackle economic issues that affected communities of color in Minneapolis. “We initially envisioned ourselves as an anti-poverty organization,” said NOC’s former executive director and co-founder Steve Fletcher. “It was a very modest campaign by the standards of what NOC is doing now.”

But by 2011, Occupy Wall Street had captured the country’s attention, and NOC suddenly found its work connected to something much larger. “Issues we were trying to raise nobody was listening to — suddenly everybody was paying attention to,” Fletcher said.

Beyond making NOC part of a larger discussion, the Occupy movement also connected the organization with large swath of people who also wanted to stop foreclosures in north Minneapolis — along with other issues facing low-income families and communities of color in the Twin Cities. 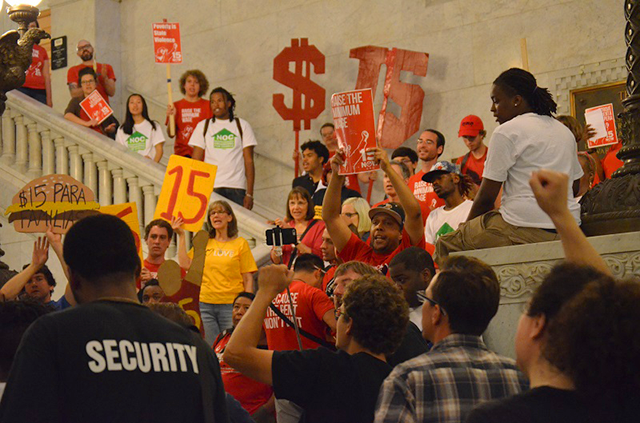 MinnPost photo by Kristoffer Tigue
Over 100 NOC, 15 Now and CTUL members crowded the Minneapolis City Hall rotunda earlier this year to deliver 20,000 signatures in favor of voting on raising the minimum wage.

But while the Occupy movement influenced NOC, Fletcher said, it was leaders of color at NOC who pushed the organization to focus its work. “They really brought the racial justice component in anti-poverty work to the forefront,” Fletcher said.

One of the leaders was Newby, who had been living in north Minneapolis for only a year when a 2011 tornado swept through his neighborhood, destroying dozens of homes and displacing hundreds of residents. The tornado missed Newby’s house, but the destruction around him — and the government’s response to it — acted as a catalyst for his activism.

After witnessing what he calls a poor response from city and state officials to the disaster, he joined NOC as the organization’s housing organizer, intent on trying to force the city and state to address the decades of neglect and disenfranchisement of its black community.

What Newby learned from those initial experiences set the precedent for how the organization has operated ever since: unifying people of color over a shared crisis. “What many people considered a national crisis, for me, was an opportunity to build power,” he said.

Newby became NOC’s executive director in 2013. As the organization’s public profile grew, thanks in no small part to several successful campaigns, so did their funding. By their third year after Newby took over, their donor base had roughly quadrupled, from about 220 to more than a thousand, he said, and they started getting large one-time donations, too. This month alone, NOC has received two $10,000 donations. “People love winning,” Newby said. “And funders love winning.”

Ron Harris agrees. He worked for NOC as their economic policy organizer for a year before leaving the organization last month to work as a policy aide for Minneapolis City Council Member Lisa Bender. He said he was drawn to NOC’s ability to rally people of color together around important issues. “NOC is by far the most consequential job I’ve ever had,” he said. “One of the proudest decisions I’ve ever made was to work there.”

Eight years ago, when Minneapolis City Council Member Cam Gordon tried to repeal Minneapolis’ lurking and spitting ordinance, he couldn’t get it done. Then, last summer, the city once again took up the issue. This time, with NOC’s vocal support as an issue addressing racial equity — the law was widely perceived to target people of color — the statute was repealed, on a 12-1 vote.  “The coalition was bigger and more supported,” Gordon said. “We were really able to mobilize and turn out people.”

Newby chalks the victory up to a changing political climate, one in which people of color and other marginalized communities are turning out in record numbers to voice their opinions — on everything from better education and higher wages to police accountability. “It’s the appetite for radical political change led by directly-impacted, low-income folks and people of color,” he said. “I think people are hungry for it.” 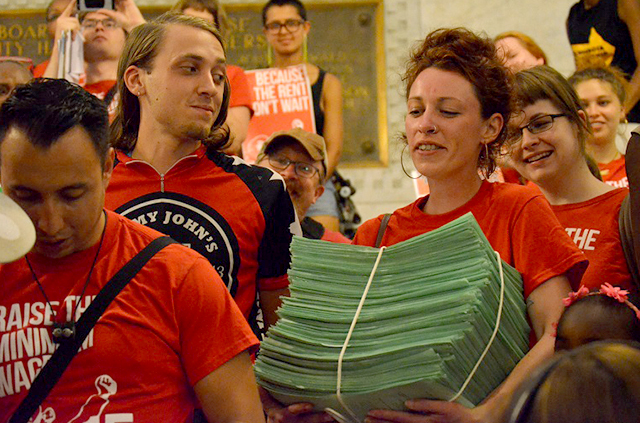 MinnPost photo by Kristoffer Tigue
Ginger Jentzen holding 20,000 signatures to be verified by the city clerk.

Gordon said he isn’t sure whether the political landscape really has changed, but he believes the political process certainly has. Though the deft use of social media, organizations like NOC are able to organize huge numbers of people more quickly than ever, a change that’s made a big difference in how policymakers interact with their constituents, many of whom show up at a moment’s notice for council hearings or will flood an official’s inbox or social media feed with messages.

Stephanie Gasca, the communications director for Centro de Trabajadores Unidos en Lucha (CTUL), said today’s landscape also nurtures strong relationships between organizations with similar interests. CTUL, who organizes mostly working class Latinos in the state, recently worked with NOC to collect and deliver 17,000 verified signatures to city hall in an attempt to get a $15 minimum wage referendum on the November ballot. “It kind of was a natural collaboration,” Gasca said. “NOC and CTUL are probably the two organizations in the Twin Cities who are organizing low-wage workers of color directly around workers’ rights.”

When supporters of a $15 minimum wage dropped off nearly 20,000 signatures at Minneapolis City Hall in June — more than three times the amount needed to qualify for a referendum — many assumed the hardest part of the fight for the issue was over.

But soon after, the city council voted to keep the issue off the November ballot, following the advice of the city attorney, who argued that the measure wasn’t an appropriate issue for the city’s charter. Supporters of the amendment, who included NOC, CTUL and the group 15 Now Minnesota, fought back, suing the city to get the measure on the ballot. A Hennepin County Judge ruled in their favor in mid-August, but the city appealed the decision to the Minnesota Supreme Court. On Tuesday, the court reversed the lower court decision, agreeing with the city’s position. 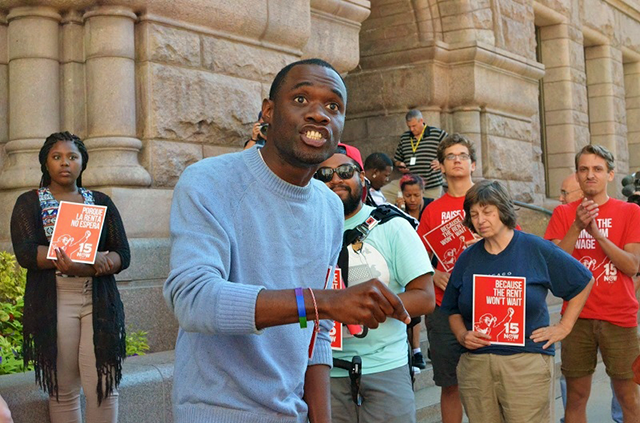 MinnPost photo by Kristoffer Tigue
NOC Field Director Mike Griffin addressing a crowd of more than 50 outside City Hall before the Minnesota Supreme Court announced their decision on Tuesday.

City council members have expressed their willingness to eventually address the issue via a city ordinance, though not on the activists’ timeline. The council recently directed city staff research and propose a minimum wage policy – by the spring of 2017.

Supporters of $15 wage, however, are determined to push the council to take up the issue before the end of the year. “This was never about ballot campaign versus an ordinance,” NOC’s Griffin said. “This is about the people who live poverty.”

Whatever the outcome of the wage issue, Newby said NOC will continue to fight — and to expand its influence over the shape the policy direction of Minnesota. He is looking to expand operations into St. Paul and other cities, and soon. “This is just the beginning,” he said. “The aspirational goal is to be more physically connected to neighborhoods throughout the metro, and over time, throughout the state.”

From foreclosures to the fight for a $15 wage: the rise of Neighborhoods Organizing for Change