In the beginning, Danny Sigelman had a dream.

It was Christmas Eve 2003 in Austin, Texas, and Sigelman — a Jewish musician/deejay/writer from Minneapolis — happened upon a party celebrating all things Jewish amidst the omnipresent Christmas reverie. He brought the idea back to Minnesota and christened it “Jewbilee.”

“It really has a life of its own now,” said Sigelman. “I had this wildest dream at the beginning, and it’s kind of tongue-in-cheek, that this whole Jewbilee thing would eventually overtake Christmas Eve in a way that people would rather come celebrate Jewbilee. Every year I Google Jewbilee and I see that there’s more and more events with the same title around the country. I’m not saying it’s because of us, but I think word has gotten around.”

While Christmas accounts for the culture’s dominant religious celebration on Dec. 24, Sigelman’s dream of Jewbilee becoming a holiday staple has come somewhat true. Since 2004, the nondenominational bash has taken place at the Kitty Kat Club, the 331, and Grumpy’s in downtown Minneapolis.

“The first one was at the King and I, with about 10 or 15 of us. Now every year we have a couple hundred people come out. It’s pretty fun,” said Sigelman. “I also know that there’s a lot of non-Jews who look forward to it, because they don’t have family in town or maybe they want to get away from their families and meet up with their friends. It kind of becomes the only game in town, and in its own way it’s become a tradition unto itself.” 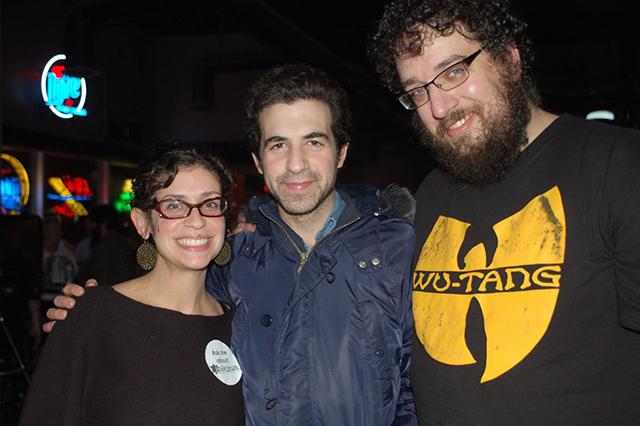 “The whole aspect of comedy is kind of a Jewish tradition in itself, so I wanted to represent that in a way, and that’s when Dan Mogol got involved and booked the comedians,” said Sigelman.

“This is my seventh or eighth year doing it,” said Mogol. “It’s a very fun experience, because there’s a rabbi who comes every year and he tells dirty jokes. Where else are you going to get that?”

“I consider myself ethnically Jewish, my parents raised me secular, so Jewbilee is one of the only times of the year that I get to connect with my people and be in a room full of us,” said Oxborough. “I personally celebrate both Christmas and Hanukkah, but Jewbilee is important to me, as is my cultural and ethnic identity as a Jew, so I take time away from Christmas to be around other Jews.”

One of the musical highlights in years past was the Rivkinz, aka Revolution drummer Bobby Z, nee Rivkin, who performed at Jewbilee for the first time with his offspring after having a second heart attack following the death of his old friend and band mate Prince.

“I met Bobby Z four or five years ago when he was doing one of his first Heart Foundation gigs with the Revolution, and at that point I asked him if he’d want to get involved and he was really excited about the idea of playing again,” said Sigelman. “So he put together a band with his kids called the Rivkinz, and since then they’ve kind of adopted me as part of their family, which is cool.”

Over the years the crowds have steadily grown, but despite Sigelman’s dream of it eclipsing Christmas Eve, all concerned maintain that Jewbilee isn’t part of the so-called war on Christmas.

“It’s a reaction, but it’s not a sad reaction,” said Carin Mrotz, executive director of Jewish Community Action, who has helped organize Jewbilee in years past. “This is a time of year where if you’re not Christian or you don’t celebrate Christmas, you are made to feel kind of weird and outsider-y and this is more of an outsider celebration. Like, ‘We don’t fit in and we’re going to throw a party.’ ”

“There is not a lot to do during December that is specifically aimed at Jews,” cracked Isaacs. “There are countless Christmas-themed movies, plays and events, but only one Adam Sandler song, one terrible Adam Sandler movie, and like half a Rugrats special for us. So it’s nice to have an event that is Jewish-themed, even though everyone is welcome. As a Jew, when you’re growing up, Christmas is weird. It really feels like you’re not in the club, and missing out on a national tradition. It sucks. My family would go see a movie and eat Chinese food every year on Christmas Eve, which is an adequate alternative.”

Sigelman: “I think being Jewish there’s always a tongue-in-cheek concept that ‘Oh, we need something to do.’ I remember the year when I was a kid and [the Holocaust blockbuster] ‘Schindler’s List’ came out on Christmas Eve. Brilliant marketing, right? Because it was a thing to do as a Jew — go to a Chinese restaurant and go to a movie. So those are traditions unto themselves, and maybe this one is another one along the same lines.”

“I’m glad Danny has put all the energy into it all these years; we have members (of Jewish Community Action) who have gone every year,” said Mrotz. “I mean, we even have people who aren’t young people who love it. We have people in their 50s and 60s who just love that there’s a place to go and party on Christmas Eve, a time when otherwise Jews would be pretty lonely.”

Jewbilee: Now ‘a tradition unto itself’ on Christmas Eve