“What we wanted to do is promote Hmong artists and Hmong culture throughout the generations,” said artist Katherina Vang, who curated the show. “So however you express your culture or your ethnicity to you — that’s what we pretty much wanted from the artists. It was up to them to define it, or reveal it. Our [mission] is to promote local Hmong art.”

The exhibition of 20 works by 13 artists runs through February and showcases Hmong artists from Minnesota, California, Indiana and New Zealand. MinnPost took in the opening, in words and photos: 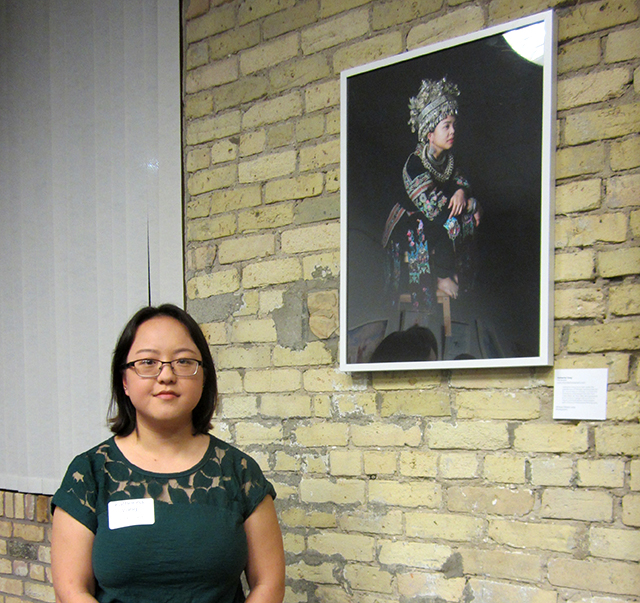 Katherina Vang (aka Kat) goes by her artist pseudonym Maivab, which means “baby” in Hmong. Of her 2015 photograph “Hmong Chinese” she said, “In China, the Hmong people are called the Miao. So, every different country you go to, it’s Hmong-Australian, Hmong-American, and so on. So this is the traditional clothing for Hmong-Chinese. I wanted to combine the Hmong-Chinese, Hmong-Australian, Hmong-Laos, and Hmong-Thailand together and explain how diverse we are, because even within the culture we’re always transitioning and we’re moving and adjusting to the different countries that we migrated to.

“My sister owns Hmong ABC, and she owns a collection of all these Hmong-Chinese dresses, so it was easier for me. I have 18 sisters; my dad got busy with two wives and I consider them all my sisters. My family itself, there are huge stories, but you go outside of that and there are many more stories.” 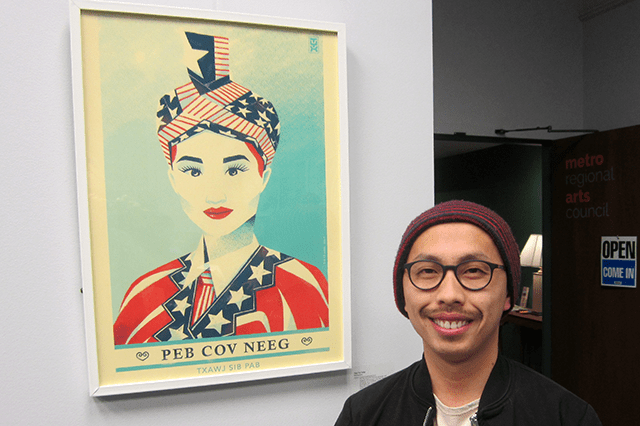 Tou Yia Xiong is a Hmong illustrator and designer who was born in a Thai refugee camp and grew up in northeast Wisconsin. Of his 2017 digital art piece “Peb Cov Neeg Txawj Sib Pab” he said, “A year ago was Women’s March, and the posters that Shepherd Fairy did, the whole ‘We The People’ series, I saw them and thought they were really cool. And on Facebook I said I liked the posters and a friend said, ‘You should make one to represent our culture.’ So I said, ‘Yeah!,’ and spent all night working on it and the next morning I posted it on Facebook as a free download, and it blew up. Within a few hours, people had the posters at the march, so it was really great to see. What this says is, it doesn’t really translate, but ‘Peb Cov Neeg Txawj Sib Pab’ means ‘Our people, or we the people, know how to help each other.’ ” 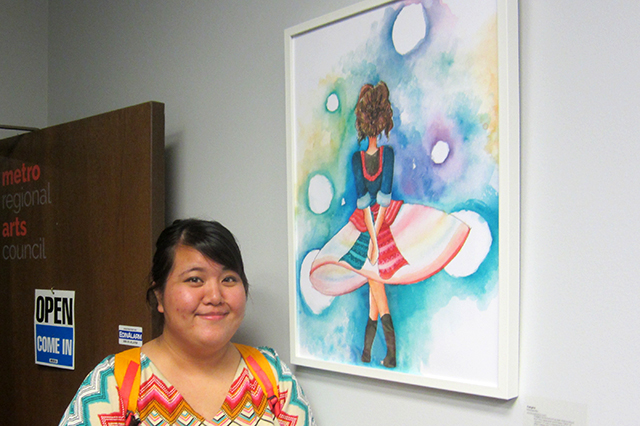 Ericka Sheena Vang (aka Pabgha) is a painter who said of her 2016 watercolor “Aesthetic Heart,” “My initial drawings are inspired from reading manga and growing up watching Disney, Pixar, and Studio Ghibli films. As I grew older, I noticed that there weren’t many main characters that looked like me and/or from my Hmong culture. This has inspired me to create my own stories about my ethnic culture.

“I created this by watercolor, and it was inspired by my sisters, when we were having a hang-out, Hmong-theme. It was a really good time, all my sisters reunited, they’re kind of busy; we only get together once a year. I have five sisters. One lives in Pennsylvania, five others all over Minnesota. I really love drawing anime and cartoons, and I’m aiming for children’s books.” 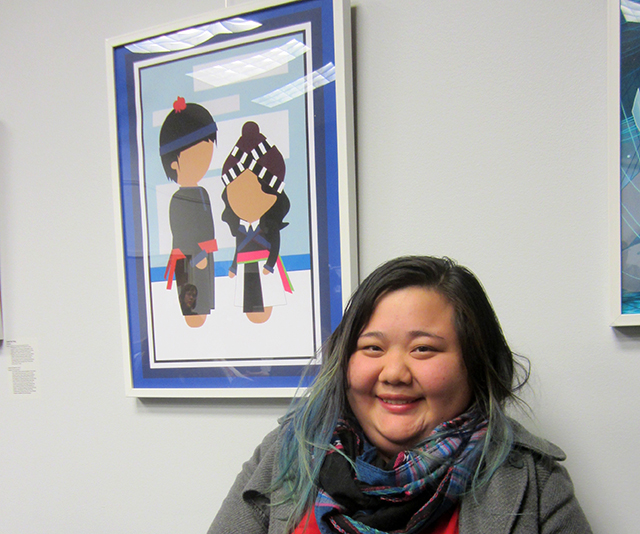 Victoria Vang is an artist and graphic designer who said of her 2017 illustration “Another Love Story,” “These are two Hmong warriors, and I was thinking about Hmong [mating] time, that’s the time you’re supposed to meet the other genders, and of the old days, where they kind of fall in love at first sight. I was thinking about nowadays, they might meet and not hang out all day, but they exchange numbers and ‘Hi’ and ‘Bye’ and go back to their own bubble. I look at my nieces and my cousins, and all their relationships are online. They show me their texts, like, ‘He said this,’ or ‘She said that,’ and oh, the old days before technology when they had to come visit you! Now they’re like, face video-chatting. [The faces on the artwork] are blank because anybody can be those people.”