Jacinto Aguilar has lived in the apartment building on the corner of East 31st Street and 22nd Avenue South for 23 years, watching landlord after landlord come and go. He and his family endured even as conditions worsened and the rent increased.

The cycle continued under Stephen Frenz, a property owner embroiled in a lawsuit brought by tenants over unsafe and unsanitary conditions. Frenz, who owns The Apartment Shop properties, saw his rental licenses revoked by the City of Minneapolis in December after it was discovered that he lied about the ownership of his properties.

On Tuesday, Aguilar and some of his neighbors described the conditions of their homes at a block party in the Corcoran neighborhood that doubled as an opportunity to rally around several organizations’ vision for affordable housing in Minneapolis. As people grazed at a table of grilled burgers and chicken and children played with bubbles, tenants told of leaks, broken appliances, mold, mice, and roaches.

Octavia Marberry moved into an apartment at 3116 22nd Ave. S. with her son when she was desperate enough for a new place that she agreed to rent it without having seen the property before she moved in. She started noticing things weren’t right. A year later, she’s had three different landlords, and none have addressed all the problems that have cropped up, including a broken heater. She said she took pictures this winter of a thermometer that read 45 degrees inside. Her 1-year-old was hospitalized during that time for sickness she attributes to the conditions inside her apartment.

Chloe Jackson, who moved into the building north of Marberry in 2013, recited a long list of problems she reported that were never fixed, she said — including a squirrel that got into her apartment through a hole in the building, and mold and dust mites that aggravated her son’s asthma. Even now, she complained those appointed by a Hennepin County court to fix up subpar apartments are only doing “the bare minimum.”

Everyone had a story. Still, they all want to stay. 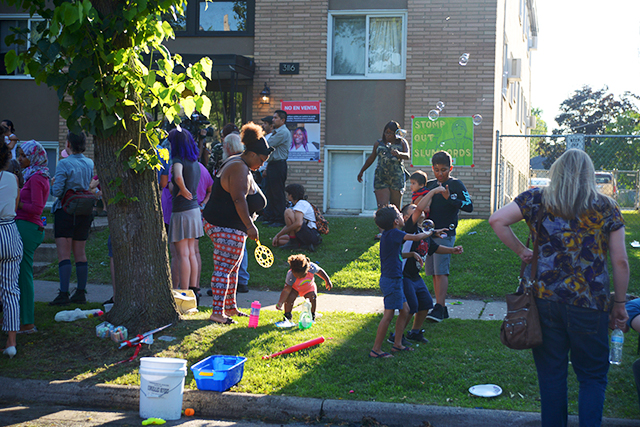 MinnPost photo by Taryn Phaneuf
As people grazed at a table of grilled burgers and chicken and children played with bubbles, tenants told of leaks, broken appliances, mold, mice, and roaches.

“Our children are part of this community. Our kids were born here,” Aguilar, whose primary language is Spanish, said in an interview with the help of an interpreter. He said he’s looked elsewhere, but he’s convinced he would encounter the same issues wherever he went, except maybe without help. “We’re all united here. … I might not have that somewhere else.”

Dubbed “Corcoran Is Not for Sale,” the block party on Tuesday was organized by Inquilinxs Unidxs por Justicia (United Renters for Justice), Parks and Power, Socialist Alternative and the Twin Cities Democratic Socialists of America – groups that want the city to enact a series of housing reforms, including rent control and a tenant bill of rights. They’re working closely with Aguilar, Marberry, Jackson, and their neighbors to determine what’s next for The Apartment Shop buildings in the neighborhood.

The next chapter in their story will unfold soon. Lighthouse Management Group, an administrator appointed by Hennepin County housing court to manage five properties, submitted a final report at the end of June detailing the steps the company took to pass city inspections of the apartment units. A Hennepin County Court hearing scheduled for June 9 was canceled after neither party objected to the report, which suggests the next step is to conclude Lighthouse’s involvement as administrator – a matter that will be decided by a judge.

Roberto de la Riva of United Renters for Justice said it’s believed that when the administrator leaves, ownership reverts back to Frenz, who isn’t allowed to process rental licenses in the city. 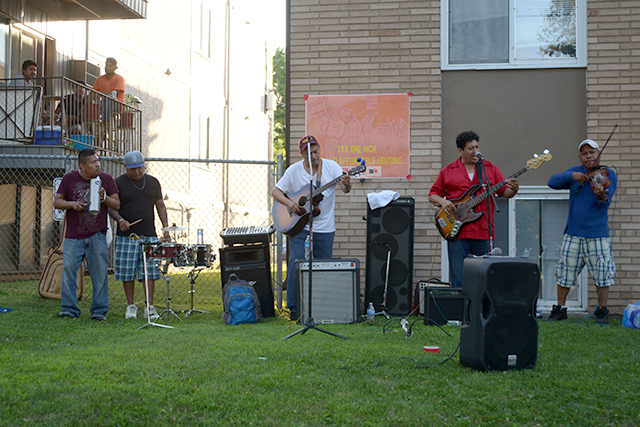 That would leave tenants in limbo. Their master plan? Buy the buildings and form a tenant-owned cooperative. “We do have a next step,” Jackson told a crowd of neighbors and activists gathered in the street. “We are going to own these buildings.”

Residents who are on board contend a cooperative would ensure they can stay in a neighborhood that’s been changing ever since the Blue Line light rail line cut through it, connecting downtown Minneapolis to the airport. The future is evident just a block north on East Lake Street, with its new residential and commercial buildings.

“Gentrification is happening all over,” said Bonnie Beckel, a Corcoran resident at the block party who lives just south of the apartments. She’s known about the conditions and frequent changeover among landlords for some time, and she’s glad to see tenants taking a stand. “There’s no question that they’d do a better job of taking care of their buildings.”