For well over a decade now, Minnesota has labored to be known for its vibrant bicycling culture. The state possesses the most bike trails, per capita, in the nation. In Minneapolis alone, nearly 5 percent of its workforce bikes to work (the national average is only half a percentage point).

It’s no secret why biking to work would be an attractive option: barring unforeseen expenses or the occasional tuning, bicycling is a virtually free commuting option.

And while the public image of an urban bicyclist may be most associated with urban white hipsters, the numbers paint a different picture. Both nationally and regionally, low-income children and children of color are more likely to bike or walk to school than their white and higher-income counterparts, according to the National Household Travel Survey. And according to the study “Socioeconomics of Urban Travel,” while bicycling ranks highest among both white and Latino riders, the bike is much more likely to be used by the latter group for commuting as opposed to recreation for the former.

All of this points to a phenomenon that Dr. Melody L. Hoffmann refers to as the “invisible cyclist” in her book, “Bike Lanes Are White Lanes: Bicycle Advocacy and Urban Planning.” Hoffmann, an Anoka-Ramsey Community College communications and media studies instructor, activist, and bike advocate, recently gave a talk at Walker Library highlighting the implications of biking from an urban planning perspective. In her book and during her talks, Hoffman continually asks: If the largest biking bloc consists of poor and working class people of color — Latino men in particular — why are most city bike lanes located in affluent, predominately white neighborhoods? Why does urban bike culture largely exclude people of color? And, more importantly, is there a connection between bike lanes and gentrification? If so, what is the socioeconomic connection between constructing bike lanes and displacing poorer communities?

In an interview with MinnPost, Hoffmann shed light on some of these questions. The conversation has been condensed and edited for length and clarity.

MinnPost: What inspired you to write this book?
Melody Hoffmann: I was originally interested in doing more gender-based stuff. Women and cycling. The way that women and biking started out, in the 19th Century, is very fascinating. And there’s lots of books written about it.  But when I was looking at gender and biking, it just wasn’t as interesting. And then, kind of at the same time I was trying to develop this project, Trayvon Martin got shot. And that really changed me.

I’ve always been an activist, but I was based more on gender. And at that point, I was like, you know what? This woman shit doesn’t matter. Because its mostly white women I’m talking about anyways. And black men are unable to walk down the sidewalk. So then, I just decided that gender wasn’t important. And I was like, I want to do more stuff on race. This is way more important to be talking about this right now. Talking about inequities.

Also, as I was riding the Greenway home, down to my first apartment in Uptown, I would just notice who was kind of allowed to loiter and who wasn’t. All these instances people were telling me, as a new person, “Don’t bike at night. And don’t do this.” And I was just noticing that a lot of the statements were cloaked in racial bias. 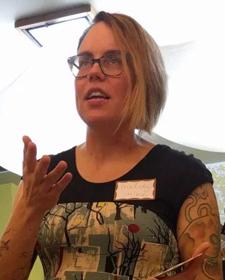 There’s a lot of mistrust around bicyclists. And so, for me to get interviews sometimes, with persons of color, it was really difficult. Because they read me as a bicyclist. And they read me as not worthy of trust. And I couldn’t tell them anymore than I could, “No, I’m actually trying to tell your side of the story. And I know it seems weird that I’m on your side. And I ride a bike. But I can’t take those two apart.”

MP: Have you gotten any pushback?
MH: When I first started, there was a lot of resistance in the bike community about, “Oh, we’re not racists!” And at this point, now, the problem is more like bike organizations have gotten that we need to be more equitable. And so they’re just using it as a word, like equity washing. So, “yes, we are equitable.” And how are you equitable?

The one pushback that I get is from … the white bike guys. And sometimes it doesn’t necessarily happen because of the book, but a podcast that I do. And somebody leaves a comment on the podcast. And they’ll say – and this is a fair point: “What do you want us to do!” They take it personally. But then they also say, “We’re trying to get more people on bikes. I’m just trying to make it safer for people. And now you’re telling me that it’s racialized?”

And then it’s like, “Okay, well, you’re not really listening. You didn’t listen to me, because I get it. I’m not saying that” – but people take it personally. Because people are like “this is my advocacy work!” And it’s like, “Yeah, I know – it’s  hard to get.” But it’s that white fragility thing. It’s not about you!

MP: Explain how you would define the core problem or point your book is trying to address.MH: Probably the white supremacy in bike/ped organizations. I don’t like to use [the term] “white supremacy.” It scares a lot of people. But if I can just say it in a different way: the dominant white power that’s like infiltrated in urban planning, bike and ped[estrian] organizations. Trying to shake that up a little bit. And, also, empowering people who have felt very marginalized. To empower them to speak up, and know that it’s not just them that’s feeling ostracized.

MP: Why do you think bike advocacy or bike lane infrastructure is so important? What’s at stake?
MH: I would say that this is more important in urban spaces. Specifically, the things I’m getting at. And it’s because more and more cities are devoting money to this type of mobility it’s just yet another space that racism is percolating or manifesting. And so, obviously, any space which racism – and classism – is manifesting, but unfortunately, in this country. Unfortunately, one and the same. So it’s intersectional.

But, it’s just another space in which this city is manifesting race and class issues with a mode of transportation that shouldn’t have any of that stuff tied to it. It shouldn’t have race and class issues. Because a bike is accessible. You can get a $50 bike and you can get a $1,000 bike, if you want. But you could get a bike for $50. Or from your neighbor. And it’s a free form of transportation. So, we really shouldn’t be having any of these issues.

But we are. That’s why it’s important to talk about. Because it’s supposed to be an accessible form of transportation. That’s why there’s scholars that study the same thing with mass transit. Because the same thing happens about who gets better bus lines; who gets the Light Rail. And that’s been going on in cities across the country forever, too.

So I just wanted to put a microscope on the bike stuff, too. Because it’s happening here, as well. And it’s important for people to get that. Otherwise, it’s going to keep manifesting.

MP: Your work is beholden a lot to Richard Florida and his research on what he terms the “creative class.” Why is this important? MH: Because, I think that a lot of cities used his theory to create a different type of downtown. We could go through a bunch of different cities. He is a consultant so he would get paid by cities to come in and plan their new city. That didn’t include shopping malls. But it included cafes. Every city would want this uptown area; that is the desired thing. Because then particular people would come hang out here.

His theory worked. Cities were like cha-ching! And it did work. It’s bringing in people to Austin, to Minneapolis, to Portland. Portland is a huge red flag in terms of bringing in the creative class. And then what happens is that you lose all of your awesome culture that made the city desirable in the first place. All the quirky people, all the punks, all the East African people that hang out there: they’re all gonna be gone. Because you’re gonna get priced out.

So people listened and followed his work and then he would boast about it and be like, “Look at what I’ve done!” And it’s like, “yeah, you displaced a bunch of people.”

MP: What does biking mean to you, personally?
MH: Independence and freedom. Come and go whenever I damn well want to. Which is why as a person who is an introvert, I don’t have to wait for anybody.  It’s also a safety thing. And I feel that so much here. But it is safety. Safety and empowerment. Freedom.

MP: What do you think that biking means to communities of color or working people, in general?
MH: Freedom, for sure. But for some people it’s a marker of poverty. And I don’t wanna just say it’s just in people of color neighborhoods. I think in working class of all people. It is a marker of poverty. Because I understand that getting a car is a status symbol for a lot of communities.  But if people have a car and a bike. Then people might start asking you, “Why are you biking then? If you have a car, then why are you choosing to bike, you know?”

MP: So how can bike advocates use their socioeconomic privilege for more equitable infrastructure planning?
MH: In a number of ways. The easiest way is to donate – or maybe the least active way – is to donate to places like Cycles for Change. There’s Tamales y Bicicletas.

By donating or volunteering your time to organizations like that that are active working in the community. And addressing bike needs that communities actually need. And there’s a host of bike shops that work with homeless or at-risk youth which are teaching them bike skills. Not just Cycles for Change. There’s actually a lot.

Or volunteering for your neighbors to apply. Or any marginalized community that you know in these communities, encouraging them to apply for those jobs or get involved. And not as a token. Because I think there’s a whole other thing about employment. And how you share when a position is available. How do you actually advertise it and who’s in your network? So you wanna make sure you share it with the diversity within your network. As an ally, you should then be talking with the people of color in your network and telling them to apply and not just telling Bill to apply. The proverbial Bill, do you know what I mean?

Do bike lanes have to be white lanes? A Q&A with author Melody L. Hoffmann