“We are probably the coldest Women’s March going on today. I was in Antarctica two years ago, and it’s actually colder here today,” said Erin Maye Quade, emcee of Saturday’s Women’s March at the state Capitol, to a crowd of a few thousand who braved single-digit temps to march and raise voices against the Trump administration. One woman stood amidst the shivering throng holding a sign that read, “I Can’t Feel My Face … But I’m Here.”

Two years ago, the Women’s March galvanized feminists all over the country. This year? “The Heartbreak of the 2019 Women’s March” was the headline on Michelle Goldberg’s column in the New York Times, while Rebecca Traister in New York magazine implored, “Don’t Give Up on the Women’s March.”

Both pieces detailed criticisms of the 2-year-old movement and the national Women’s March organization for being too white, too exclusive, and even anti-Semitic.

In 2017, the marches took place in Washington and nationwide—the largest protests in American history—were radiant symbols of hope and resistance at a bleak, terrifying historical juncture. Two years later, the Women’s March organization has become a depressing study in how left-wing movements so often implode in the digital age.

All of which, along with the frigid weather, made Saturday’s boots-on-the-ground turnout in St. Paul impressive. The program for the Minnesota Women’s March reflected the organizers’ commitment to diversity, with speakers including LGBTQIA activist CeCe McDonald, U.S. Rep. Ilhan Omar, and NAACP-Minneapolis commission chair Kelis Houston. MinnPost took in the march, in words and photos: 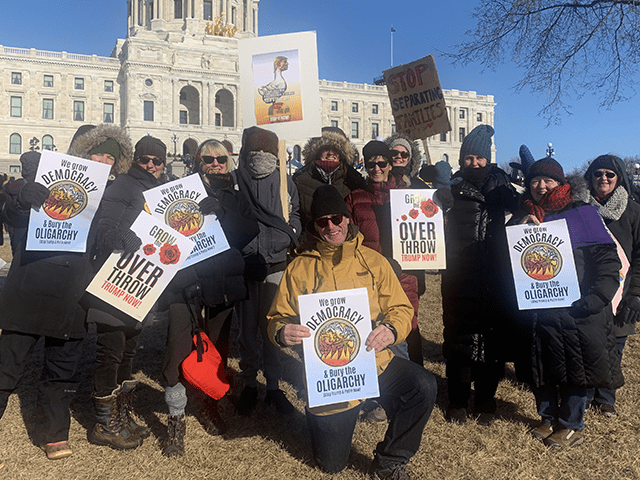 Gwen Spurrier (far right, in purple scarf): “I’m here with my family. I’ve got a daughter, I’ve got cousins, I’ve got best friends here with me. I’m from Shakopee. It’s an old, overused saying, but if you’re not part of the solution, you’re part of the problem. We have a real problem, and I feel like our democracy is at risk. And while I’m not running for office, it’s like that pebble on a beach: You need a lot of pebbles to make that sand dune, and so here we are. Two years ago we were in Washington, D.C. When [Trump] won, I went into a severe depression and binged on Hallmark movies, that’s how bad it was. Then I went to the march and I realized that there are people that recognize this is wrong, and today everybody that’s here is taking time to come out on a super cold day to say, ‘F— you Trump.’”

Amy Haslett-Marroquin and Mary Jo Cristofaro. “We’re from Northfield,” said Haslett-Marroquin. “The momentum has started. We have House power now, and I feel like it’s more important now than two years ago to be present and know that our voices are still here. It’s disappointing that there’s not more people here.” “The most important thing is to show up and for people to come together,” said Cristofaro. “If we’re not coming together as physical human beings, it just doesn’t matter. We’ll be here next year, for sure.”

Pam Davies, Christine LePage, and Marilyn Chesnik, Grantsburg, Wisconsin. “I was crying two years ago, the crowd was so amazing. It’s a smaller crowd this year, but it’s a good crowd,” said Davies. “I made the sign because I feel like our democracy is under attack, I feel like our future for our grandchildren and children is under attack, and I believe people need to be more informed, people need to stand up for what they believe in and we can’t just watch all of our values crumbling around us,” said LePage. “We have to get out in our way, whatever what that is, to save our democracy.”

Erin Maye Quade led the crowd in a chant of “No hate/no fear/immigrants are welcome here.”

Deborah and Ella Menke, Burnsville. “Trump has divided our nation and put women on the bottom,” said Deborah. “He puts everyone else but himself down.” “Today gives us an opportunity for those of us who have the right to speak out,” said Ella. “This gives us a voice, and I’m doing everything that I can because other people can’t. We were here two years ago, and this year feels more powerful. I’ve grown as a person, doing what I can at my high school, and it feels like everyone has grown in those two years.”

Roxana Perez, Eagan. My sign says ‘Ni tu santa, nit u puta, solo mujer’: ‘Not your saint, not your sinner, just a woman.’ What that means to me is that a woman doesn’t have to fall between those labels. She/they can exist without a label. It was important for me to be here today because as a Latina woman, I feel like there needs to be a space for me. We don’t fall in any category, we’re just a woman.”

Immigration attorney Kara Lynum spoke to the crowd about her work and about the harrowing scenes she saw upon recently visiting the border in Tijuana, Mexico: “If this is what happens when members of Congress and attorneys and members of the media are there to witness these violations, it’s truly terrifying to think about what happens when we’re not all there. Our government is adding detention beds in Florida, and the administration is currently trying to hold children and families in indefinite detention while they’re seeking asylum. We’re lucky to have so many groups in Minnesota working on these issues. Many of them are sponsors of today’s events, and many of them are immigrant-led and led by women of color. Seek out these groups to donate your time and money, and you need to call Congress. Our federal immigration agencies, particularly CBP, need to be held accountable. Congress needs to be asking questions, and they need to know it’s important to you.”

Michelle Harstad, Afton: “Equal rights for women is long overdue. I’m here to represent and align with my sisters, looking toward the 2020 election. I’m with the St. Croix Valley Women’s Alliance, so we have a whole sisterhood here. I made this sign this morning. I saw the author (Rebecca Traister) of this book called ‘Good and Mad: The Revolutionary Power of Women’s Anger’) on TV this morning, and thought it was perfect.”