In young Southeast Asian Americans’ schools, the stories they heard from their parents and grandparents growing up were almost never noted in their history textbooks.

The experiences of Southeast Asian communities are often forgotten, unknown or dismissed — particularly the history of the Vietnam War.

“It seemed like, growing up, all of these stories that I heard were just something that was far off in a distant land, across the ocean and back in our home country,” said Tigana Le, a recent graduate of the University of Minnesota. “Seldom did I think growing up that this history was only just recent. It was only like 45, 50 years ago. This is also not just the history of my parents but also me as a Vietnamese-American.”

The Southeast Asian Diaspora (SEAD) Project, based in north Minneapolis, is working to change that through storytelling. The organization’s project of “Recovering Stories and Planting Possibilities” uses storytelling as a tool to spark conversations, reclaim historically invisible histories and connect the past to today’s issues within the Southeast Asian community.

“It’s necessary that we use (and) that we have storytelling because it speaks to the social fabric of who we are as a people. … I think with our current social political landscape we need to be able to amplify that more,” said Chanida Phaengdara Potter, the founding executive director of The SEAD Project.

The project began by hosting community conversations with the intention of creating a space for dialogue, reflection and healing. The stories from these conversations were captured through different works of art and showcased in a collection of stories.

“When we were doing this work it was really important to really focus on the healing element on it,” said Ze Thao, the program manager of The SEAD Project’s storytelling initiative. “Your story is so important to the healing of our community, and we need to hear it so that we can all heal from it.” 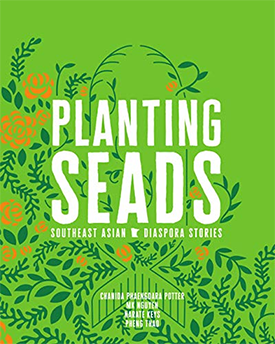 “We need to give people the opportunity to share their experiences and to humanize them a little bit,” said Thao. “But then what happens after you ask somebody to have to relive that war and that trauma that they experienced? Our work is really focused on making sure that we’re with them every step of the way.”

In the span of three months, four starter conversations were facilitated by a community leader from each of the respective Southeast Asian communities (Hmong, Khmer, Lao and Viet). A larger SEA convening followed, where participants were welcomed as a larger group. In these conversations, participants made a storytelling map timeline together, starting from the pre-colonization to postwar era.

“These stories can’t stop because they’re such a big part of the history of Southeast Asian Americans and Southeast Asian Minnesotans and why we are here,” said Thao. “So we need to continue to amplify those voices as much as possible.”

“All of the memories, pain, trauma, narratives that were brought into that space, especially bridging these different communities and bridging the generations — it was just really, really powerful to see all these communities come together,” Le said.

After a yearlong process of collecting stories from two generations of community members, 20 short stories from the perspectives of veterans, scholars, activists, medics, mothers and young people who lived through French colonialism, wars in Southeast Asia and resettlement in Minnesota were collected in “Planting SEADS: Southeast Asian Diaspora Stories” by Phaengdara Potter, Pheng Thao, mk nguyen, and Narate Judie Keys.

“It was really important that we were also bringing out voices within these communities that weren’t voices that you would typically hear when you talk about war in memory,” said Thao. “This book is really about celebrating the resilience and the strength and tenacities of our communities.”

The book has five stories from each SEA community, written in English as well as its respective language. It also showcases images, photography, and graphics. The project was made possible through the Minnesota Remembers Vietnam Grant by the Minnesota Humanities Center.  After its release in November, the book had sold 500 copies in less than two months.

“We’re really fortunate to be in an environment in the Twin Cities where we have the four main communities that were heavily impacted during this war era,” Thao said. Collecting the stories made those involved, especially the young people, more appreciative of the history. Then a community relations intern, Le helped collect the Vietnamese stories and artifacts.

“Every time that I was able to speak to an elder, share a story or hear a story or be trusted to hold that story and be responsible for that story and to convey that story in the way that would do them justice and show their truth was just really amazing,” said Le. “I was constantly always reflecting throughout this process and thinking about like, wow … this is something that’s going to be hopefully life changing, not just for the communities now and the folks who are involved now, but for generations.”

Along with its storytelling initiative, The SEAD Project also builds community through language and culture workshops. It offers eight-week intensive introduction heritage programs for Hmong, Khmer, Lao and Vietnamese languages. According to its website, the organization’s mission is “to be an accessible community hub… we hope to drive empowerment to plant the seeds of hope and possibility locally and globally.”

“There was a deep sense of appreciation for these type of stories,” said Le. “Having them be in this book and be able to see it and feel it meant that, that history was real. [It] was like us reclaiming that space, those narratives, those perspectives that often are completely invisible.”