Given the pandemic time it was born in, Minneapolis photographer Scott Streble’s new book, “Front Porch Portraits: Staying Apart Together,” could come with a third subtitle: “Lost Twin Cities.”

Taken in the first few months of the pandemic, the 550 portraits of Minneapolitans and St. Paulites at the heart of “Front Porch Portraits”  make for an enduring testament to these cloistered and muted times, and a reminder of what we’re missing. Namely:

“It really felt like I was, through this project, connecting community,” said Streble. “People felt like they were belonging to a bigger thing than just themselves. It felt like people have a thirst for that and with this pandemic they really can’t achieve that, so this was a way for them to feel that. It really wasn’t me. it was the project itself that was connecting everyone to each other.” 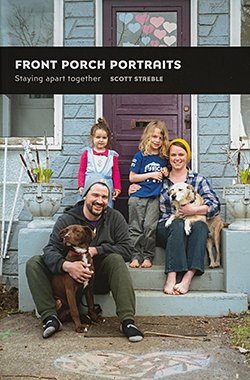 Before the COVID-19 outbreak, Streble’s calling card was “a photographer who uses photography to help people.” His clients include homeless shelters, food banks, relief organizations, Doctors Without Borders, Habitat for Humanity, The United Way, and the American Red Cross. “Porch Portraits” dovetails nicely with his credo, created as it was under the tagline “Photography for Good.”

“I’ve always said that I like people almost more than the photography and photography is a vehicle for me to meet all these interesting people,” he said. “Photography kind of gives me a license to do that, and it happened every time I knocked on someone’s door. It was exciting — 550 times. It was a lot of pictures, but it didn’t seem anywhere near that long.”

“I connected with people who I knew in different neighborhoods and had them contact their neighborhoods,” said Streble. “They were grouped in geographically so when I went out, my goal was to do as many as possible and so I would do one every 15 minutes, or as many as I could do. Thirty a day. It was very rewarding.”

That reward translates to the pages: In the age of Instagram and TikTok, the tactile feel of a photo book makes for an especially warm and inviting slice of life. Along with the porches and their occupants, the peripheral household items, shovels, planters, mailboxes — and lots of dogs — tell many mini-tales, as do the subjects’ accompanying quotes, which focus on the philosophy, spirituality, and drudgery of life during pandemic wartime.

Much of which can be summed up by social worker Megan Berkley, pictured with her husband, son, and dog: “It has been a relief to know we still want to be married to one another. Quarantine is definitely the litmus test for that.”

“A common occurrence was photographing many households on the same block,” said Streble. “Due to COVID, it felt like neighbors were bonded together. Those were particularly fun shoots as everyone stayed outside watching their neighbors being photographed, offering their version of encouragement. Another sadder situation was a woman who requested a photo as she was moving her husband into assisted living the following day.”

For some, it was their first family portrait ever. For others, a solo project. Put together, the cumulative effect is profound, as photo after photo captures smiling survivors in the act of soldiering on.

“I didn’t charge anyone for the portraits, so that was a better way to open it up to a wider demographic of people wanting their photos to be taken, or willing to do it on camera, connecting community. I felt good about the photos and selfishly, I like the photos. I’m proud of that body of work,” said Streble.

Many of the faces captured reveal a sense of relief. For many of his subjects, Streble was the first person they’d come in contact with for many weeks, and the interaction obviously brought all concerned a modicum of comfort, joy, and optimism.

“A lot of people said, ‘We haven’t talked to anyone other than family for days or weeks,” he said. “I was surprised at how optimistic people were. They were really happy. That was really a treat.

“Like I said, I think it gives them a sense of connection to a bigger thing. Same thing for me with taking photos of the people. The interaction with them for sure was as important as the actual taking of the photo. Hopefully when people look at the photos, they get a sense of wanting to know more about that person, or feeling like they can relate to them, or like, you know, ‘That’s me.’”