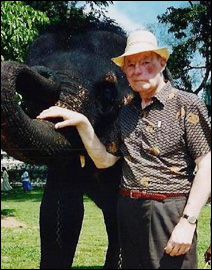 The founding dean of the University of Minnesota’s Hubert H. Humphrey Institute of Public Affairs passed away on May 30 at 90. Harlan Cleveland’s remarkably engaging and imaginative mind kept him active and busy until his final days in Sterling, Va.

After serving as the president of the University of Hawaii, Professor Cleveland arrived in Minnesota in the early 1980s when I was a graduate student at the Humphrey Institute. As a farm boy from Sri Lanka, I was intimidated by him because of his stature as a former assistant secretary of State under President John F. Kennedy and a NATO ambassador under President Lyndon B. Johnson.

Still, he made me feel so welcome and put me at ease when he said, “Patrick, I am Harlan; we both seem to have come from tropical islands.” He knew that I was nervous and he wanted to know more about my American Field Service (AFS) high school exchange experience in northern Minnesota.

Ambassador Cleveland was born in New York City, graduated from Princeton University, and pursued further studies at Oxford University as a Rhodes Scholar. He was a Marshall Plan administrator, a United Nations relief coordinator in China and Italy, and a senior executive in government before he was appointed as dean of the Maxwell School of Citizenship at Syracuse University. With his years of tropical island experience, this unassuming American diplomat portrayed himself more as a down-home type than as a product of the East Coast establishment.

In July 1993, he inscribed these words in my copy of his book, “Birth of a New World: An Open Moment for International Leadership”:

“For Patrick Mendis, With many thanks for the pleasure of watching your mind working, always hard and always constructively — with admiration, in friendship.” — Harlan Cleveland

This inscription extraordinarily revealed the greatness of this man because I was the one who needed to thank him for his kindness, generosity, and friendship. The dean has always been charitable and “Minnesota nice” to me.

His egalitarian attitude reflected Thomas Jefferson, his vibrant mind was as inspiring as Kennedy’s youthful looks, and his progressive and compassionate worldview was an extension of Hubert Humphrey. Overall, Ambassador Cleveland had been an authentic Minnesotan, who wrote a fortnightly column on world affairs for the Star Tribune of the Twin Cities from 1987 to 1993. He was also a trusted world leader, who had a global network of his protégés. He once assured me that anyone who comes from the developing world would get the best education in Minnesota with its test of survival skills in subzero temperatures.

Early advocate of online education
The professor, recipient of 22 honorary degrees and the U.S. Presidential Medal of Freedom, was an early advocate and practitioner of online education long before it became a buzzword – and he introduced me to online teaching. As a leading policy analyst, he recognized the implications of the information revolution and predicted a “nobody in charge” world, which he called “uncentralized” instead of decentralized. As a futurist and author of more than 12 books and 100 journal articles, he predicted the arrival of the knowledge worker in the global workplace and wrote about leadership and the information revolution. As an “accomplished generalist,” he was recognized by his alma mater with the PrincetonUniversity’s Woodrow Wilson Award and the U.S. Peace Corps’ Leader for Peace Award.  He was been an avid reader of world affairs, a travel enthusiast, and a life-long learner.

During his United Nations tour of the Middle East and his Asian tour as president of the World Academy of Art and Science, I had the privilege to serve as his special assistant. His intellectual curiosity was amazing; he learned how to count to 10 in Arabic from a taxi driver on our way to meet with King Hussein of Jordan in Amman. His energy level was higher than the proverbial “Energizer Bunny” as he climbed a hilltop forest hermitage to recruit the American-born Pali and Buddhist scholar, Venerable Dr. Bhikkhu Bodhi, in Kandy, Sri Lanka, for the World Academy.

Even though he is no longer with us physically, his remarkable legacy continues. Just as Mahatma Gandhi once said, “My life is my message,” Ambassador Cleveland told us: “All real-world problems are interdisciplinary, inter-professional, and international. Policy analysis means combining the rigors of different disciplines, the insights from multiple professions, the work ways of multiple cultures. But remember that a committee of narrow thinkers doesn’t produce integrative outcomes. The best interdisciplinary instrument is still the individual human mind.”

With this, he often reminded us to develop a “generalist” mindset, as he himself was an embodiment of “General” George Washington in stature, mindset, and dignity.