The many challenges facing the Obama administration include the need to restore American idealism as a positive force on the international stage. That was surely among the casualties of the Bush-Cheney years. The international sympathy aroused by the attacks on Sept. 11, 2001, soon dissipated as the United States initiated an ill-advised war in Iraq and engaged in torture and human-rights abuses inconsistent with American ideals and international norms.

American idealism, however, has often helped forge global solutions on the international stage. In looking for models, policymakers would do well to recall America’s leadership — spearheaded by Vice President Walter F. Mondale — in addressing the Indochinese refugee crisis in July 1979.

The summer of 1979 was a difficult time for America and the Carter administration. With energy prices soaring and supply uncertain, President Jimmy Carter first canceled an announced energy speech to retreat to Camp David for wide-ranging consultations on a perceived national malaise. Carter’s energy speech, when subsequently given, was well-received, but Carter proceeded to squander that advantage with a poorly executed Cabinet shakeup that contributed to a perception of chaos and incompetence. The United States faced economic crises and international challenges, the magnitude of which were not yet fully apparent.

The Indochinese refugee problem had not engaged the public imagination, and yet it presented a disaster of tragic proportions. Thousands of refugees had been forced to flee from Vietnam after America’s withdrawal in 1975. Many lived in overcrowded camps in substandard conditions. Some were being murdered by their oppressors. Others were dying in shark-infested waters as their unseaworthy vessels could find no safe harbor to accept them.

In spring, 1979, America was doing little to respond to this global tragedy. Policymakers were focused on other challenges, and bureaucratic considerations counseled against American intervention. 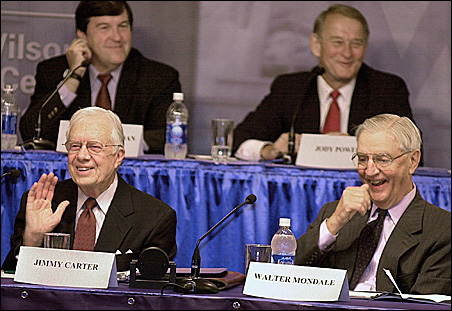 REUTERS/Mike Theiler
Former U.S. President Jimmy Carter, left, and former Vice President Walter Mondale are shown during a symposium held in 2003 for the 25th anniversary of the Camp David Peace Accords between Israel and Egypt.

Mondale’s persuasion
That changed once Mondale became involved. Mondale persuaded Carter that America’s human-rights policy would ring hollow if we did not act to address the problem. With Carter’s support, Mondale persuaded the State Department to denounce Vietnam for its inhumane policies, and he persuaded Carter to send the Sixth Fleet to rescue the boat people from the perils of the seas. Mondale also persuaded Carter to seek additional funds to establish refugee processing centers in Southeast Asia and to assist in resettling refugees, and to agree to admit 14,000 refugees to the United States per month.

Mondale headed the U.S. delegation to a U.N. Conference on Indochinese Refugees in Geneva on July 20-21, 1979. He spent the first day persuading other nations to increase the numbers of refugees they would accept, to expand temporary camps, and to stop forcing the refugees to sea. But the highlight of the conference came on July 21, 1979, when Mondale delivered one of the truly eloquent speeches in American history.

“[S]ome tragedies defy the imagination,” Mondale began. “Some misery so surpasses the grasp of reason that language itself breaks beneath the strain. Instead, we gasp for metaphors. Instead, we speak the inaudible dialect of the human heart.”

Predicament not without precedent
Mondale reminded his audience from 65 nations that the predicament of the Indochinese boat people was not without “precedent in the annals of shame.” In July 1938 an international conference at Evian had failed to act to save Jews from Nazi atrocities. “The civilized world hid in the cloak of legalisms,” Mondale recalled. That indifference was followed days later by conception of the ” ‘final solution to the Jewish problem,’ ” Mondale reminded his audience.

“Let us not re-enact their error. Let us not be the heirs to their shame,” Mondale implored the world.

Mondale outlined a seven-point program for an international response to the crisis: The world must press the Socialist Republic of Vietnam to end its inhumane and racist policies. First asylum countries must continue to respond; others must double their resettlement commitments as the United States had done. The United Nations High Commissioner for Refugees needed more resources; Mondale urged others to follow America’s example in more than doubling its commitment. Mondale also proposed steps to relieve pressure on existing camps and to help poorer nations resettle refugees, again with pledges of American financial help. Finally, Mondale urged other nations to follow America’s lead in committing ships to rescue boat people at sea.

In closing, Mondale summoned his generation of world leaders to avoid the mistakes of the past. “Let us not be like the others. Let us renounce that legacy of shame. Let us reach beyond metaphor. Let us honor the moral principles we inherit. Let us do something meaningful — something profound — to stem this misery. We face a world problem. Let us fashion a world solution.”

Joel K. Goldstein is the Vincent C. Immel Professor of Law at the Saint Louis University School of Law, St. Louis, Mo. He is the author of “The Modern American Vice Presidency: The Transformation of a Political Institution” (Princeton University Press, 1982) and other works on the presidency, vice presidency and constitutional law.