In the wake of Friday’s school massacre in Connecticut, I’ve been thinking of grade-school security systems I’ve experienced worldwide.

In 1976, my family moved from the United States to Jerusalem, where memories of Jewish-Arab armed violence were still fresh and relevant.

Fences topped with razor-wire encircled my school grounds, and our two official perimeter openings were staffed all day by parent volunteers.

Last year, my family and I spent 10 months in Mexico, where crime-related violence has become shockingly high. A thick wall surrounded our kids’ school, and both gated entrances were guarded by small clusters of local armed police.

Both Israel and Mexico, however, are environments of extreme inequity; in Israel, Jewish-Arab disparities are dramatic, and in Mexico, a growing middle class has yet to reverse entrenched racial and economic inequalities.

This summer we moved to Minneapolis, and were relieved to put our kids in a school without excessive security or institutionalized fear.

Our kids’ Montessori school is not entirely unprotected, of course. The main entrances are staffed by teachers each morning, and after 9 a.m., the doors are locked, with entrance permitted through intercom or passcode permission.

None could entirely protect

In reality, however, none of these school security systems in Israel, Mexico and Minneapolis could prevent a determined, Connecticut-style attacker from killing many.

In Israel, any assailant could have strolled through a hole in the wire or shot her way through the entrance, where parent guards were neither sandbag-protected nor constantly alert.

In Mexico, a very small team of trained attackers could have blown through the gate, as the police were neither highly trained, sandbag-protected, or heavily armed.

And in Minneapolis, anyone with a pistol could smash through the front door or mow down children, parents and teachers during pick-up or drop-off.

To really make schools safe, we’d have to turn them into fortified enclaves, with perimeters of concrete, sandbags at the entrance, and a well trained team of alert, heavily armed, and strongly defended infantry.

Like many others in this world, I’ve visited this kind of heavily guarded space. During the 1980s, the Southern Lebanese military forts I was posted to were set up this way. Today, so is Erez, the infamous Israeli checkpoint at the entrance to the Gaza Strip.

Good reasons for not building them

None of these secure locations are pleasant places to be, however, and there are good reasons we don’t build them for our kids. Israeli-controlled border crossings are sites of Palestinian misery, and there is an entire Israeli human-rights group dedicated to monitoring checkpoint abuses. 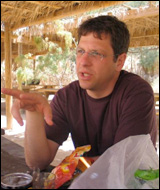 James Ron
In the wake of this most recent U.S. school massacre , I’m considering asking our school principal to enforce new security measures.

We could replace the school’s glass doors with a more durable material, and could build a fence around the parking lot entrance. We could change the entrance password each week, and could better enforce the intercom protocol.

Still, experience tells me that nothing short of serious, military-style reinforcement will offer our children a high probability of protection from a determined, well-armed attacker with the element of surprise.

After tweaking our school’s existing protections, the only thing left is to hope that my wife and I chose wisely when making Minneapolis our new home.

Socially and politically just environments don’t guarantee school security. Nothing, short of the extreme measures discussed above, can ever do that.

Environments can make a difference

They can, however, raise the probability that our kids will be safe, largely because they produce fewer alienated and aggrieved individuals.

My sense is that Minneapolis is that kind of place. Although conquest of this area from the Native Americans was bloody and unjust, it was since settled by European immigrants possessing strong, social democratic traditions. The city became a magnet for social justice nonprofits, and the many Fortune-500 companies headquartered here seem genuinely concerned with corporate social responsibility. The city is a haven for international refugees, and the university department where I teach is chock-a-block with students and faculty dedicated to making the world a better place.

In theory, all this should offer better school protection than all the sandbags, Uzis, and barbed wire in the world.

James Ron teaches at the University of Minnesota, where he holds the Stassen Chair in International Affairs at the Hubert H. Humphrey School of Public Affairs & Department of Political Science. He is also an affiliated professor at CIDE, a Mexico City university, and at Israel’s Ben Gurion University.

Rethinking school safety in the wake of the Connecticut massacre