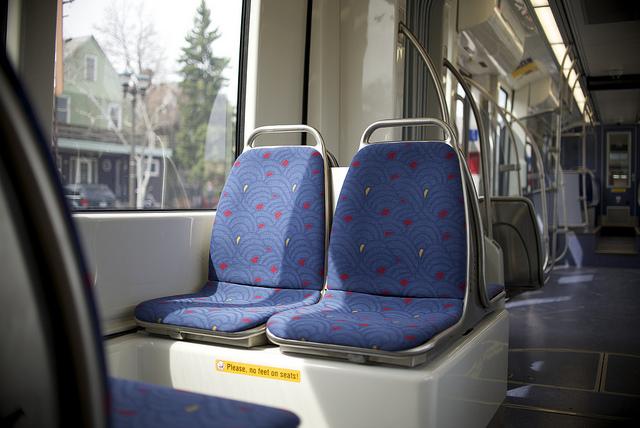 Courtesy of Metro Transit/Eric Wheeler
Ridership projections for Southwest Light Rail tell a story of an alignment designed to avoid urban communities, not serve them.

There has been much coverage in the media promoting the importance of the Southwest Light Rail (SWLRT) project as a crucial element needed in order to achieve equity in this region. While this seems like a convincing argument for moving the currently designed alignment forward, we would suggest that SWLRT is actually “trickle-down transit.”

Trickle-down transit borrows its catch phrase from “trickle-down economics,” where it is assumed that economic benefits provided to the upper-income areas/people will “trickle down” to those with the greatest needs. But, instead, it actually produces a transit system that provides unequal service to communities along geographic, economic and racial lines. Where these economic and service disparities between exurban/suburban and urban communities already exist, as described in the Brookings Institution’s Mind the Gap study, trickle-down transit acts to make them greater and further entrench them as governing patterns of growth.

Minor benefits resulting from trickle-down transit to underserved communities, in this SWLRT design, are being portrayed with inflated significance to justify this alignment as a whole. This tactic serves to calm groups that are in need, and prevent or reduce opposition to what might otherwise be viewed as simply unfair public policy. 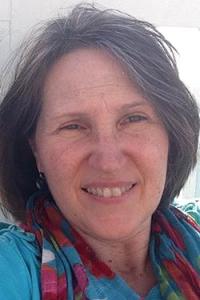 Southwest LRT was designed by Met Council appointees of Gov. Tim Pawlenty to meet standards established by the George W. Bush administration. Those standards prioritized fast commute times for “choice riders” from the suburbs into the city over relieving urban transit needs. These “choice” suburban riders often use transit for convenience rather than necessity and, in this case, are already served by high-end express commuter buses. Meanwhile, transit-dependent residents in the urban core are largely dismissed and ignored by virtue of the alignment chosen.

As currently designed, the SWLRT limits service to South Minneapolis. The West Lake Street station is located a mere three blocks from the border of St. Louis Park, barely within the city limits, on the far west side of Minneapolis. According to projected ridership, this is the most significant SWLRT stop in Minneapolis.

When the SWLRT alignment was chosen, it avoided urban density, transit needs and opportunities in more central areas of South Minneapolis. Had this line been routed to meet urban needs in the first place, residents and major employers located in South Minneapolis communities, such as Phillips, would have been served. This would include: Wells Fargo, Abbott Northwestern Hospital, Children’s Hospital, Allina Clinics and the Midtown Global Market. 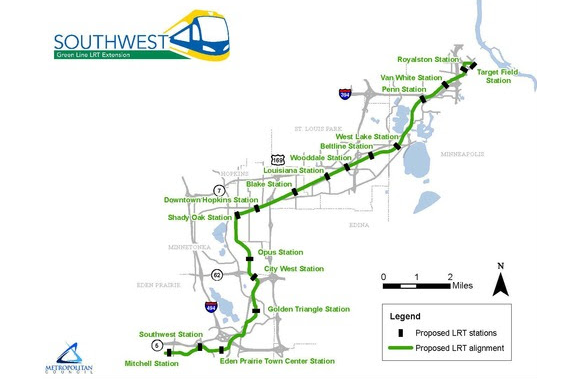 Courtesy of the Metropolitan Council
As currently designed, the SWLRT limits service to South Minneapolis.

To compensate for dismissing and ignoring those neighborhoods’ needs, the Met Council proposed that South Minneapolis riders take a bus across the city to reach the 21st Street station. However, the latest version of the SWLRT plan does not include a 21st Street station.

What about North Minneapolis?

Members of the Metropolitan Council refer to Southwest LRT as the “equity” train and claim that the route enhances transit for communities in north Minneapolis. But the ridership numbers tell a different story — in fact, the ridership projections tell a story of an alignment designed to avoid urban communities, not serve them. The Met Council’s projected ridership numbers for the three northernmost stations is less than 2,000 rides per day, or 1,000 round-trip riders by 2030.  That’s less than 7 percent of the overall ridership. This is not “equity,” and in fact does not serve the existing transit needs in Minneapolis.

By exaggerating the significance of this 7 percent ridership in advancing equity, the Met Council hopes to calm underserved groups and prevent or reduce opposition to what might otherwise be viewed as unfair public policy for Minneapolis.

Interestingly, at a recent neighborhood meeting in North Minneapolis, residents who rely on public transit voiced their transportation concerns and expressed their needs.  They asked for safe and well-lit bus shelters, similar to the shelters in more affluent communities. One Met Council member in attendance stated that funding for such improvements is a “zero sum game.” In order to fund such improvements, money needs to be taken from somewhere else. But, as part of the SWLRT project budget, upgraded facilities will be provided for the express bus commuters in Eden Prairie, at a cost of approximately $20 million dollars. And the “equity” train rolls on.

It’s about a fair system, not just a system

Shouldn’t Minneapolis residents just be proud to be team players for the cause of a regional system? Especially a system that is portrayed as such an important element to delivering geographic, racial, and economic equity. After all, it’s about the overall transit system.

The transit system isn’t just trains, it is also buses, trails and pedestrian friendly streets within the city. How does the SWLRT alignment impact those existing systems?

Buses are the primary mode of public transit used within Minneapolis. However, transit planners consider light rail to be the “gold standard” of transit infrastructure. While buses are the primary mode of transit, rail is the “privileged” mode. It is “privileged” for a few reasons. First, federal and multi-county funding is dedicated for building, not operating transit, so maintaining buses is not prioritized in large funding streams. Second, it is just easier to cut bus routes than fixed rail lines. When the “privileged” mode serves the most “privileged” riders, while avoiding urban density and need, a dual and unequal system is created based on geography.

As stated before, it is a “zero sum game”; money needs to be taken from one to fund another. Regions around the country that have implemented commuter rail while avoiding urban density and need have learned this, and the result has been unequal transit systems, some communities relying heavily on strained bus systems and other communities served by cars and rail.

Here’s how it works. When already limited operating funds for transit are stretched or reduced during normal budget fluctuations, it is typically bus service that is cut to save money, not rail service. And when bus routes are dedicated to serve the rail lines, like the recent feeder line buses proposed to get North Minneapolis residents to an LRT station, other buses are diverted away from local routes.

The facts speak for themselves

The Met Council talks about equity, but the facts speak for themselves.

Mayor Hodges and the City Council prioritized equity during their elections.  The Met Council is now attempting to persuade Minneapolis residents and officials to support this design in the name of equity and regionalism. Minneapolis is being asked to “vote yes” to Municipal Consent, with blatant inflation of the minor benefits to underserved Minneapolis communities. Trickle-down transit is not only inadequate. It shifts the very resources from those who most need them, and actually increases regional economic and racial disparities.

Maintain municipal control over how the city will grow into the future; reboot the Southwest Light Rail design.

Patty Schmitz and Julie Sabo are members of LRT Done Right, a grassroots community group. Sabo is also a former senator in the Minnesota Legislature, where she served on the Transportation Committee.

By Patty Schmitz and Julie Sabo