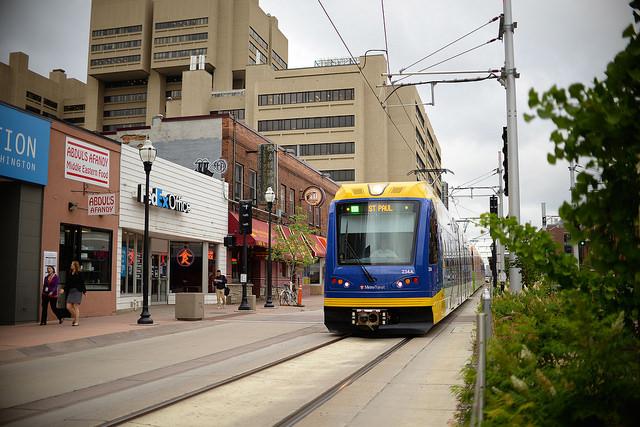 Courtesy of Metro Transit/Eric Wheeler
As we saw with controversy over the Central Corridor Green Line, the fight over Southwest light rail isn’t your typical left-right tussle over whether to develop rail transit. It’s more about how and where to build it.

With a divided vote by the Minneapolis City Council on Aug. 29, municipal consent by all six jurisdictions along the planned Southwest light rail Green Line extension was wrapped up, qualifying the $1.7 billion project for final engineering approval from federal funders. Susan Haigh, chair of the sponsoring Metropolitan Council, touted the 15.8-mile link from Minneapolis to Eden Prairie as “a key addition to our regional economy” and “an equitable transit investment” that will connect residents of all incomes to “good jobs, education and community amenities.”

All arguably true, but, as Yogi Berra said, it ain’t over ’til it’s over. Obstacles to getting the trains running in 2019 still abound, particularly potential legal challenges from the Minneapolis Park Board and residents of a quiet, leafy lakeside neighborhood along the route. And, as we saw with controversy over the Central Corridor Green Line, this isn’t your typical left-right tussle over whether to develop rail transit. It’s more about how and where to build it.

The same thing is already happening with the Bottineau Blue Line extension, which last week got preliminary engineering approval from the Federal Transit Administration. Progressive critics say the line should follow the run-down West Broadway commercial strip on its way from Minneapolis to a Brooklyn Park cornfield rather than the planned route along lightly developed Olson Highway and through Theodore Wirth Park.

Similarly, the Southwest naysayers are holding out hope for a subway reroute down Nicollet Avenue to the Midtown Greenway, where displacing or pinching the current bicycle trail might stir opposition, too. Planners rejected that one years ago on grounds of higher costs, lower ridership and longer travel times to the suburbs, although the current Kenilworth Corridor tunneling plan has added many millions to the preferred option’s price tag.

Besides the NIMBY and environmental issues at stake in Kenilworth, these debates and another brewing over bus rapid transit plans for the Gateway Corridor from St. Paul to Woodbury involve broader questions about whom and what transit should serve. Suburban “choice” riders or “transit-dependent” ones (reframed as “transit-reliable” by some insightful observers) in the inner cities? Busy existing urban nodes or suburban park-and-rides, office parks and greenfields considered ripe for development?

‘Not an urbanist vision’

This has brought the Met Council’s entire transit planning process under credible attack. The council’s draft 2040 Metropolitan Transportation Policy Plan “is not an urbanist vision,” protests U of M transportation guru David Levinson in a new blog. “It is, unfortunately, not a bold vision. It is a fiscally constrained vision. It is a vision of an organization … representing seven mostly suburban counties.”

That last point goes a long way to explaining why the council’s drawing boards are now full of rail and bus lines extending far beyond the limits of Minneapolis and St. Paul — a politically expedient counterbalance to the first two light rail lines that serve only the core cities, the airport and the Mall of America.

Still, there’s great sense in coordinated, metrowide planning of transport development. The alternative of walling off high-quality transit in the urban centers and leaving the ‘burbs to their autocentric ways appeals to some. However unlikely the prospects of achieving that politically and fiscally, it might address some glaring inequities pointed up in the current debate.

Levinson says the Met Council’s transit planning maps fail to “focus on areas with more people … service provided per person is not as great in the center as at the edges.” That’s a complaint heard in many other places, where transit agencies allegedly ignore reliable riders in dense neighborhoods, who are cheaper to serve, to chase sprawled-out suburbanites at great cost.

“Little is proposed for the urban core cities and some first-ring suburbs,” Levinson says of the long-range plan. “Arterial BRT is an improvement, of course, but there is so little of it.” I’ll quibble with professor here: 12 routes in planning seem like more than a little.

The issue of fiscal efficiency

Besides the question of fairness, fiscal efficiency is at issue here, too. A recent Cal-Berkeley study identified what makes a successful transit investment: Place it where it will connect a lot of people to a lot of jobs and give it as much grade-separated right-of-way as possible, and it will attract a lot of riders, Payton Chung summarizes on Streetsblog USA, adding that “the success of a transit project is almost synonymous with whether it serves areas that are dense in both jobs and population and have expensive parking — in short, lively urban neighborhoods.”

Drilling down further, transit works best when it reaches “concentrations of high-wage jobs and leisure jobs (in shops, restaurants, arts and entertainment)” and serves “metro areas that are simultaneously large and congested,” Chung added.

Grade-separated transit — subway trains — also is being brought up here. By some measures, Minneapolis has the largest central business district and the most downtown transit commuters in the United States without a subway. Levinson raises these points, saying the underground option deserves serious consideration, although he focuses not on Nicollet Avenue but on two lines criss-crossing downtown Minneapolis. The time savings to be gained “would both benefit current riders and induce more transit riders, and with positive feedback mechanism between accessibility and development, lead to more intense land development at stations.”

Nothing like this is in the Met Council’s plan, however. On the flip side of the coin, Nick Magrino at streets.mn wonders if it is “too late to stop the Blue Line extension from cutting around north Minneapolis” or the Gateway plan “to run through mostly undeveloped areas of Oakdale and Lake Elmo?” How you take that depends on whether you think transit-oriented development should happen only in the core cities.

I’m not ready to answer all these questions. But the Met Council’s long-range plan is still open for comment, with many workshops and a public hearing coming up. Here’s the schedule. These difficult issues need as much citizen input as possible. Show up and make your voice heard.

As Magrino said: “It’s very easy to sit on the sidelines and throw rocks at the process while professionals work under complicated circumstances and, at times, confusing political mandates. But policymakers should realize that if we continue to make objectively bad decisions with transit planning, we’re going to have more debacles like [the Southwest]. We can and should do better for the future of our metropolitan area.”