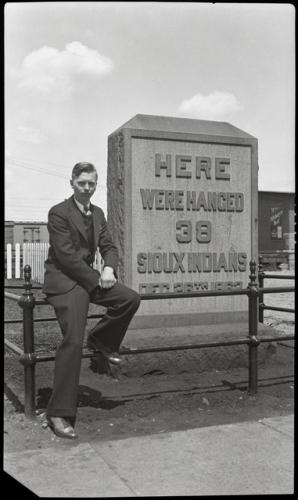 Courtesy of the Minnesota Historical Society
The Mankato monument in 1930

It’s easy, as Minnesotans, to sit back and watch from a safe distance as Americans elsewhere struggle to decide what to do about the Confederate monuments in their midst. Minnesota, after all, is apparently among the minority of states without at least one such monument within its borders. But before we congratulate ourselves for our sophisticated and nuanced understanding of history and race, we would do well to remember what happened in our state just over a century ago.

On the day after Christmas, 1912, several hundred people gathered at the corner of what was then Front and Main streets in downtown Mankato to mark the 50th anniversary of the largest mass hanging in U.S. history. Thirty-eight Dakota men had been executed at that exact spot for crimes allegedly committed during the U.S.-Dakota War of 1862. The highlight of the 50th anniversary commemoration was the dedication of a granite monument inscribed with the words, “Here Were Hanged 38 Sioux Indians.”

In his dedication address, Judge Lorin Cray rejected any notion that the monument inappropriately glorified a mass killing. As the Mankato Free Press reported, he “wished to have it understood that the monument [had] not been erected to gloat over the deaths of the redmen,” but was instead meant “simply to record accurately an event in history.” The judge’s assessment held sway for more than four decades.

In the late 1950s, a small group of Mankatoites began advocating for the monument’s removal. Its presence, they argued, gave the city an “unwholesome reputation.” Pharmacist Allen Mollison went so far as to ask Gov. Orville Freeman to join the campaign. Although Freeman did not respond, the head of his human rights commission, Clifford Rucker, did. Rucker wrote that he and his fellow commissioners agreed the “eyesore” should be removed. He also complained that the Minnesota Historical Society felt otherwise and was determined to block any removal efforts.

The monument remained in place for another 15 or so years while the arguments over its fate ebbed and flowed. In 1971, the city finally removed it — but only to make way for urban removal. The contentious granite slab was placed in storage with plans to reinstall it at some point in the future.

By that time, however, many Mankato residents had come to believe that commemorating a mass execution was, at the very least, tacky and culturally insensitive — and possibly even an incitement to violence given the rise of militant organizations like the American Indian Movement. The monument never reappeared in public.

Current location is a mystery 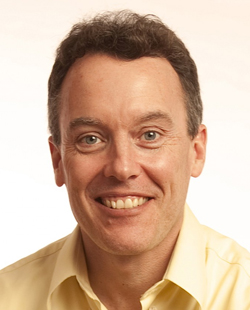 The current location of the Mankato monument remains unknown. About 10 years ago, a history class at Mankato State University tried without success to track down the slab. The students uncovered some evidence that a city employee had given the monument to Dakota elders, but the investigative trail ended there.

Now a new memorial exists near the place where the vanished monument once stood. Reconciliation Park features a statue of a buffalo and a large “scroll” inscribed with the names of the 38 men who were executed there.

It’s hard to imagine what it must have felt like for an American Indian — especially a Dakota — to walk past that granite slab at Front and Main, knowing that many Minnesotans considered it simply a piece of history, etched in stone. Thankfully it’s gone now, even if it was meant to be removed only temporarily. Its disappearance has not erased history. But the fact that it existed at all should serve as a reminder that we Minnesotans have always struggled, and often failed, to live up to our ideals of racial and cultural justice. It’s not just southerners. We northerners are capable of erecting “eyesores,” too.

Dave Kenney is a freelance writer specializing in Minnesota history.