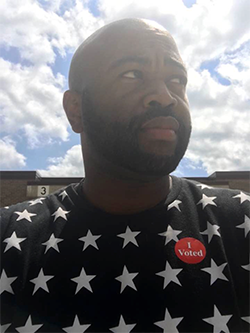 I paid my debt to society over the years spent in prison. On probation, walking out the doors for the final time meant society and I were even. Or so I thought. New doors to housing discrimination and job discrimination opened in their place. Then I would learn that I couldn’t vote either.

When you’re released on probation, the clock starts as soon as the gate opens. Tick. Tock. You have 60 days to land a job and housing or return to a cell.

As the 2008 election started heating up and a black man who organized on the southside of my hometown of Chicago began to rise, the thought of not voting on Election Day began to eat at me. Watching the debates. Seeing the early poll numbers. Talking to my family on the phone about the possibility that a black man might actually become president.

I wasn’t one of the almost 70 million people who voted for Barack Obama. Or one of the 65 million who voted to keep him there four years later. I watched countless mayors and elected officials begin and end terms. All while I remained a spectator to our most democratic of processes. How could this be?

Because I’ve done wrong. And served my time. But I forgot that a felony conviction means a life sentence as a second-class citizen. Why was I so naïve?

I made good on my “second chance.” I am a homeowner. A father. A professor. An activist, speaker, volunteer. But most important, I am a taxpayer. Isn’t that what society wants? What else should I do to pay my debt?

“No taxation without representation.” Since my voting rights are terminated until I finish my Draconian 20-year probationary sentence (which ends in July of 2026), does that mean I’m tax exempt? Where’s this notion of fairness that the government speaks so highly of?

As a disenfranchised citizen, election days are the worst. I watch the excitement of voters, hoping they don’t ask me anything. “Hey Jason, did you make it to the polls yet?” Do I lie? Or do I share that I’ve made a few poor choices and therefore I’m not able to participate in the political process?

“Daddy, where’s your sticker?” Do I lie to my daughters? They can’t imagine their daddy committing a crime. Do I tell them before they need to know and risk damaging their belief in me?

I grew weary of experiencing the injustices inflicted upon returnees and started sharing my story. I embraced the scarlet F(elon) on election days so others could learn about disenfranchisement. This wasn’t easy for me, and the criticism hurled my way was immense. You do the crime, you do the time! You should’ve thought about your rights when you were selling drugs!

I read somewhere that children who don’t see their parents vote are less likely to vote themselves. I couldn’t let that be my girls. I couldn’t allow my mistakes to plague my children.

My commitment to restore my vote pushed me to search out loopholes in the system. Through extensive research, I learned that convicted felons can apply for something called “early termination of probation.” That’s it! I put the onus on my judge to completely remove my chains. On Jan. 5, 2016, with tears in my eyes, I began to pour my heart out:

To the Honorable Judge Elizabeth Martin:

I am writing this letter to seek an early termination of probation. In 2006, I was grateful to receive the 20-year probationary term, however, after completing nearly half of the term without any new criminal charges, I want to move forward with my dreams and aspirations.

Since 2006, I have accomplished a number of things. I am a proud husband and father of two beautiful daughters; I have completed a bachelors and masters in criminal justice and have completed my dissertation for my terminal degree; I am a criminal justice educator at Metropolitan State University as well as Hamline University; I am a national trainer, speaker, and consultant; and I am helping offenders and victims learn from my mistakes. I have made good on my second chance and want to terminate my probation so that I can enjoy more of life’s opportunities.

While I am sincerely remorseful for my actions, I am seeking to end my probationary term so that I can contribute more to society. First, I have been offered job assignments in other countries but due to my status, I can’t obtain a passport.  Secondly, I want to be able to vote and eventually run for the school board in my district. I have accomplished many things in a short amount of time but I feel there is much more for me to do. I hope you can find it in your heart to end my probation so that I can transcend my felony convictions and move on with my life.

I anguished for months waiting for her response. On March 23, 2016, I received the reply:

IT IS ORDERED that Jason Marque Sole is hereby discharged from probation, restored to all civil rights and full citizenship with full right to vote and hold office as if said conviction had not taken place.

But still I wonder: Why isn’t there someone consistently committed to providing relief to probationers? Is that part of the game? Lock up people of color (particularly black people) so they can’t ever have political power? Could that be why seven states have lifetime bans on voting for people who’ve been convicted of crimes? With a system designed to oppress, how many people who are denied their rights to vote are innocent? Five percent? Ten percent? More?

Those of us who are poor and disenfranchised are consistently denied access to power. If the Constitution is committed to creating fairness and equality for ALL, how could I be denied voting rights when I pay taxes? Isn’t that criminal in nature?

While I am grateful I’m able to cast a ballot, there are 51,000 Minnesotans who will not be allowed to access this privilege on Nov. 7. It’s very difficult for me to revel in my legal status as a voter while others just like me are sidelined.

Statistics show that returnees who are civically engaged are less likely to reoffend. We all claim to want safer societies but refuse to take even the simplest of steps to make it a reality.

I now have that coveted sticker that proclaims, “I voted.” I’ve begun to show others how to end their ridiculous probationary sentences so they can wear one too. But where are the legislators who seek to uphold the values listed in the Constitution?

I disgraced my mother, my community, and myself when I committed my crimes. The Constitution of the United States continues to disgrace all Americans by taking taxes from the same citizens it simultaneously denies the right to vote.

Jason Marque Sole is a community leader, a professor, an author, and a father living — and voting — in Minnesota.