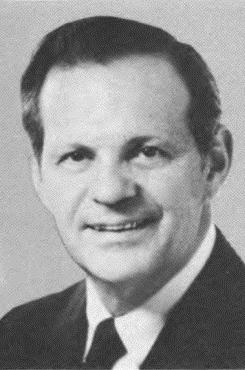 In the 1960s, I delivered the Minneapolis Star in Golden Valley. My paper route included the home of Bill and Ruth Frenzel. Around age 15, I quit the newspaper business. A few years later, Frenzel was elected to represent the 3rd Congressional District. He served in Congress for almost two decades.

My parents consistently worked for candidates who ran against Frenzel. However, despite my family’s opposing partisan leanings, Bill and Ruth Frenzel were known to be good neighbors, parents, listeners and, most important to me, good tippers. When Frenzel canvassed the neighborhood, he ignored the political signs dotting our lawn and stopped by just to chat.

Frenzel served on the powerful House Ways and Means Committee, the crucible for the nation’s tax policy. He enjoyed a reputation as policy oriented and described himself as a “fiscal curmudgeon.” He was a member of the “Wednesday Group,” a coalition of moderate Republican congressional leaders.

After leaving office in 1991, Frenzel took his fiscal and trade policy expertise to the Brookings Institution.

At the time of his death in 2014, Democrats as progressive as Rep. Keith Ellison hailed Frenzel as someone who “worked across the aisle.” Rep. Rick Nolan said Frenzel “understood the foundation of bipartisanship.”

Despite some boundary changes, the desires of 3rd district residents have not dramatically changed over the years. If the district was a food, it would be, well, tapioca pudding. Prayers in churches and synagogues throughout the district invariably include something like “Lord, give us fair, thoughtful, not too burdensome public policies which help meet the needs of our neighbors. Also, please let the Vikings win.”

While the sentiments of district voters have not significantly changed, the ideology and approach of the district’s representation appears to have shifted. The district’s current representative, Erik Paulsen, and his allies have employed extensive TV advertising to promote a tax cut package which is now finding its way to the president’s desk. Critics have marshaled a host of arguments against the bill. However, it may be instructive to consider how Frenzel – the “fiscal curmudgeon”– might react to the legislation.

Ronald Reagan was elected president shortly after Frenzel joined the Ways and Means Committee. Two major tax matters unfolded during Reagan’s first term. The first was the Economic Recovery Tax Act of 1981 (known as Kemp-Roth), which, among other things, significantly cut individual, corporate and estate taxes to stimulate the economy. Shortly after passage of Kemp-Roth, the deficit exploded, interest rates rose to 20 percent, and the Dow Jones Industrial Average fell nearly 30 percent. The country experienced a “double dip” recession.

Soon after Kemp-Roth became law, the Congress reversed course by passing the Tax Equity and Fiscal Responsibility Act (TEFRA), which undid much of Kemp-Roth. TEFRA implemented what was, at that time, the largest peacetime tax hike in history. The economy stabilized and the first “Reagan recovery” took off. Frenzel was among 103 Republicans who joined 122 Democrats to pass TEFRA.

Like Paulsen, Frenzel believed that tax cuts could spur job growth. However, Frenzel was honest with his constituents by requiring that the budget impact had to be married to the adoption of any new tax policy. Frenzel was too much of a deficit hawk to advocate wholesale tax giveaways without communicating the commensurate spending cuts that would have to occur.

In “Taming the Deficit,” a 2007 Brookings paper co-authored by Frenzel, Frenzel’s summary begins with the following daunting language: “Currently projected deficits are unsustainable and pose serious risks to the economy, make us dangerously dependent on the rest of the world, impose an extra “debt tax” on every taxpayer, send the bill for current spending to future generations and weaken the ability of the federal government to invest in the future or respond to unforeseen circumstances.” The paper sets forth a series of proposals to deal with the deficit, which include entitlement reform, a spending freeze and, significantly, a “broadening of the tax base.”

Since Frenzel’s paper was written, the deficit has grown and, according to most, will now climb more than $1 trillion if the tax bill promoted by Paulsen becomes law. It is inconceivable that Frenzel would be in support of the current tax bill given his strong feelings about deficits and Paulsen’s eerie silence on the impact of the proposed tax cuts on entitlements.

Further, Frenzel probably would be disappointed in the highly partisan process by which the tax bill has been pushed and, no doubt, would be surprised by Paulsen’s need to saturate the district’s airwaves to convince his own constituents of the merits of the bill. Frenzel worked across party lines throughout his career. He described Democratic Speaker of the House Tom Foley as a “good” leader, endorsed President Barack Obama’s proposed 2009 spending freeze and helped Clinton pass the North American Free Trade Agreement.

Given his genial nature, one can also speculate about how appalled Frenzel would be at how uncivil Washington has become. District voters can imagine Frenzel writing the preface to Sen. Jeff Flake’s recent book attacking the tone and direction of President Donald Trump’s Republican Party. Tragically, in the face of highly partisan, often tawdry and rude behavior, Paulsen has simply never found Frenzel’s voice.

When Frenzel died in 2014, Paulsen took to the House floor and stated, “… there will be no temptation on the part of any of us to try to do a Bill Frenzel imitation because there will never be another like him.” True to his word, Paulsen has not been tempted to emulate Frenzel’s leadership traits when if it comes to bipartisan, rational fiscal policy.

Robert Moilanen is a resident of the 3rd Congressional District who formerly worked for Vice President Walter Mondale.

Bill Frenzel: The ghost of the Republican Party past