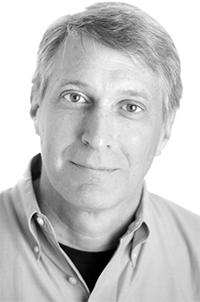 Blue wave? We’ll see. In an off-year election when too many Democrats typically don’t vote, Democratic candidates and activists have a lot of work to do before they can win over enough 2016 Trump voters to fuel a wave that will turn the national political map blue.

The kind of work I’m talking about isn’t door knocking, fundraising and get-out-the-vote organizing. That’s important too, but I’m talking about messaging. So far this election season, much of the Democrats’ messaging has been ineffective to harmful.

On social media and on the campaign trail, I see a lot of self-indulgent, self-righteous scream therapy from the left. There is a lot of snide mocking and scolding of Trump voters. Trump voters are called “stupid,” “naive,” “racist,” and worse. As Trump becomes more untruthful, unhinged and un-American by the day, frustrated progressives lash out with greater ferocity at the 46 percent of Americans who voted for Trump in 2016.

Ridiculing Trump voters on a personal level is never politically helpful. But it is a bit more understandable during party caucus and primary season, when Democratic candidates are trying to out-liberal each other when preaching to the progressive, anti-Trump choir. But in the summer and fall of 2018, when Democrats need to appeal to 2016 Trump voters rather than other Democrats, they need to stop scolding.

Don’t get me wrong. I love a good cathartic rant as much as the next guy or gal, and I’m frustrated with Trump voters too. But we all need to get more self-disciplined. All this constant chiding does is make 2016 Trump voters more defensive and prone to rationalizing another vote for Trumpublican congressional apologists in 2018. Every time I observe a Trump voter being castigated by a cocksure progressive candidate or activist, I can feel Trump voters getting more deeply entrenched in the Trump column.

Open-minded Trump voters, and there are some, need a face-saving way to justify and explain a move away from Trumpism. So for messaging during the 2018 campaign, the villain needs to be Trump and his post-election flip-flops, not Trump voters. The messaging needs to focus on Trump’s failure to keep his 2016 promises to Trump voters, not on Trump voters being stupid in 2016. That’s an important nuance.

Here’s what it would sound like for a candidate to run against Trump lies rather than Trump voters:

I don’t blame Trump voters for wanting a president who promised he would drain the special interest swamp in D.C. I wanted that too. But the fact is, as president, Trump did the complete opposite.

And I don’t blame Trump voters for wanting someone who promised to make the wealthiest 1 percent to pay more, not less. I wanted that too. But the fact is, as president, Trump did the opposite.

I certainly don’t blame Trump voters for wanting someone who promised better health care protections. I wanted that too. But again, as president, Trump did the opposite.

So, if I seem angry, I am. But I’m not upset at Trump voters. I’m furious at President Trump for lying to his voters and all Americans.

As mad as I am, Trump voters have a right to be a thousand times angrier at Trump. When someone lies to you, it’s because they don’t respect you enough to be honest. They lie because they think you’re too stupid to know the difference. But in 2018, Trump is going to learn that many of his 2016 voters aren’t stupid, and they now see through his betrayals and lies.

That’s how it could sound verbally. This is how the messaging strategy looks graphically: 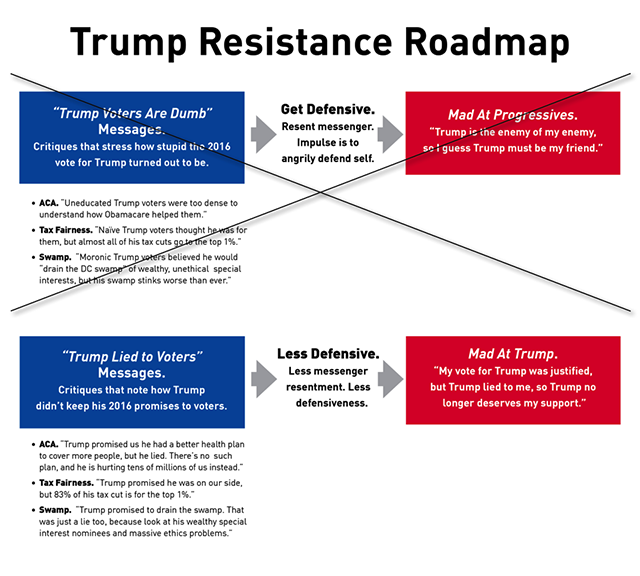 Some won’t be persuaded

I’m not naive about this. I understand that this messaging nuance won’t persuade every Trump voter. Nothing will persuade Trump voters who are deeply racist, closed minded, or hopelessly brainwashed by the propaganda spewed on Fox News and conservative talk radio.

But this approach gives progressives a shot at winning a modest subset of Trump voters, such as the many voters who were more anti-Clinton than pro-Trump. Given that Trump lost the popular vote in 2016 by 2 percent, the attraction of even 5 percent of those 2016 Trump voters could be enough to make Nov. 6, 2018, into a Blue Tuesday.

Winning in 2018 and limiting Trump damage is worth taking a pass on the cathartic message of “I told you so.” So my fellow Democrats, if only for the next five months, let’s get disciplined and stop nagging Trump voters.