We’re about a week deep in November and the Twin Cities metro has yet to see its first snowfall of the year. In fact, it was just a few days ago that temperatures hit more than 70 degrees in Minneapolis.

If this strikes you as a little unusual, please take a moment to applaud your adept powers of perception.

Over the past 100 years, the first snow of the year fell in the Twin Cities just about half the time by today's date, according to data from the Department of Natural Resources. Pity the hardy souls living here in 1985; that year saw its first snowfall on September 24.

The latest date for first snow? In 1928, the first snow was recorded on December 3.

But in general, one could count on snow to fly in the Twin Cities in November. In fact, the most common first days of snow in these years have been November 7th and 8th — this coming weekend — according to the data.

But don’t plan on busting out the shovels just yet. According to current projections by AccuWeather, we’re not going to get accumulation for a while. Minneapolis and St. Paul are expected to see a light snowfall on November 19, then nothing until December 11.

For a statewide and national perspective, check out this map from the National Oceanic and Atmospheric Administration, based on slightly different data (the 30-year normals from 1981-2010): 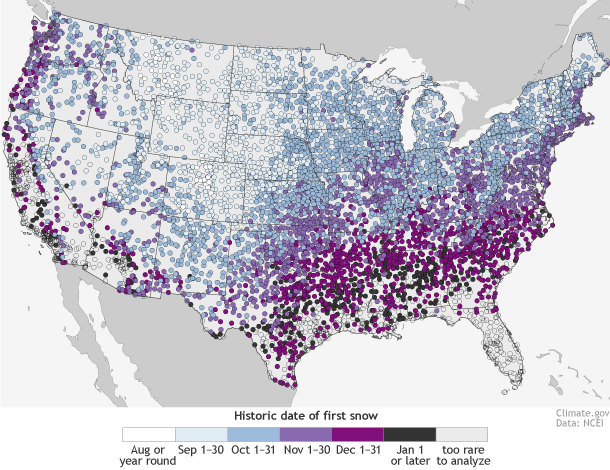 For much of Minnesota, it generally starts snowing at some point in October.

Random Acts of Data is an occasional series by MinnPost reporter Andy Mannix and news editor Tom Nehil. The goal: to answer questions about all things Minnesota using the vast amount of data at our disposal. If you have a question you’re wondering about, send an email to data@minnpost.com with the subject line, “Random Acts of Data.”

It’s November: Shouldn’t it have snowed by now?