One evening in early summer 2014, a group of young men approached a 17-year-old near the corner of Queen and 30th avenues north in Minneapolis, looking to buy some marijuana. They agreed on a small amount — a mere $15 worth — but the slightly older group of teens didn't want to pay.

“This is mine,” said one of them, 19-year-old Michael Lashone Ferguson, after taking the bag, according to court records.

The exchange turned into a fistfight, and then escalated into something worse. Ferguson produced a Smith & Wesson handgun and began to open fire, missing his target but spraying nearby houses with bullets.

Before anyone called 911, a series of nearby microphones picked up the frequency of the shots and triangulated the location of the incident. The audio traveled 2,000 miles to Newark, California, where a sound engineer analyzed the feed and confirmed it was gunfire, and then sent a report to 911 operators back in Minneapolis so the department could dispatch officers to the scene. The whole exchange usually takes less than a minute. Later that evening, with the help of witnesses, Minneapolis police took Ferguson and two of his accomplices into custody. They found the bag of weed and the handgun nearby and Ferguson was convicted of first-degree aiding and abetting aggravated robbery.

The technology that assisted in the timely arrest is called ShotSpotter. In 2007, then-Third Precinct Minneapolis Police Commander Scott Gerlicher helped bring this little-known crime-fighting technology to his South Side district. The next year, Minneapolis installed more microphones on the North Side, another area of the city also troubled by frequent gun violence.

“[ShotSpotter] allows us a much more rapid response,” says Gerlicher, now commander of the police department’s Strategic Information and Crime Analysis Division. “Cops are able to get there much more quickly, and thus the chances of making an apprehension or finding victims are much greater than by traditional means.”

But ShotSpotter also serves another, perhaps equally important function: It provides a macro look at how and where shootings occur in the city — particularly those incidents that don’t lead to arrests, which account for the vast majority of shots fired across the city.

“We know gun violence better than anyone in the world,” says ShotSpotter CEO Ralph Clark.

MinnPost analyzed five years of ShotSpotter data, beginning in January 2009. In that time, the system has dispatched officers to more than 5,000 shooting incidents in Minneapolis.

The data don't provide a perfect picture of shootings. For one thing, ShotSpotter can only provide data for the areas where its microphones are installed. Although the city has added more mics since first installing ShotSpotter in '07, they are still only used in high-shooting areas in North and South Side neighborhoods. It also doesn't pick up shots fired inside a home or building, and there’s still the occasional false positive.

But Clark says the company guarantees to detect at least 80 percent of shots fired in these areas, and usually hits closer to 90-95 percent — far more accurate than relying only on 911 callers.

1. The number of gunshots fired in the city each year has been trending down

First, some good news: the number of shots fired appears to be dropping. As illustrated in the chart below, ShotSpotter detected 1,169 shots in 2009. In 2014, there were 697. Police note that ShotSpotter technology has gotten better over this time period, meaning there haven't been as many false-positives, which could contribute somewhat to the decline.

2. Shootings are largely concentrated in just a few neighborhoods

Neighborhoods in north Minneapolis see the most shooting incidents. Out of 5,029 shootings detected by ShotSpotter, about 64 percent took place in Camden or Near North. Jordan — a Near North community bound by Lowry Avenue to the north, Emerson Avenue to the east and West Broadway to the south and west — saw the highest concentration of ShotSpotter activations, with 1,378 in the six-year period, or about 27 percent of all shooting incidents. The Hawthorne community, also part of Near North, came in second with 773 incidents. The Central community saw the most shootings in South, with 461 incidents, followed by Midtown Phillips (266), Ventura Village (236) and East Phillips (234).

Use the heat map below to explore shooting incident concentrations in different areas of the city, or type an address into the search bar to zoom to a specific area.

These trends have been pretty stable over the last six years, too. While specific areas of concentrated gunshots vary from year to year, the Jordan and Hawthorne neighborhoods consistently see the most gunfire. 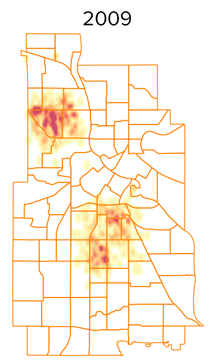 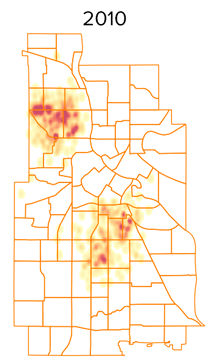 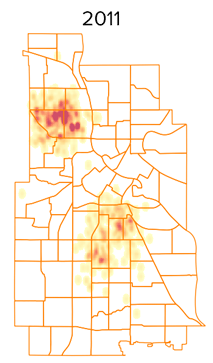 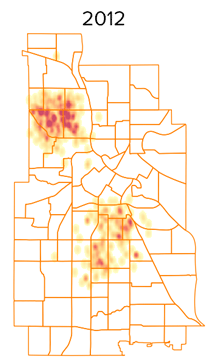 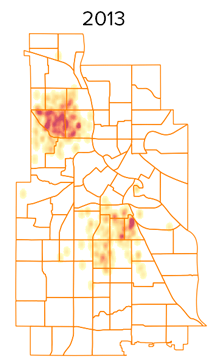 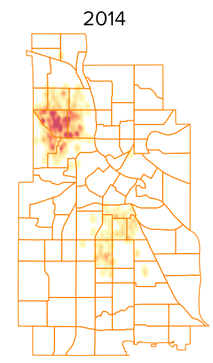 3. Most shootings occur after dark

If the next six years look like the last, the safest time to walk around in Minneapolis is around 9 on a February morning.

Unsurprisingly, most shots occur at night, ramping up around 5 p.m. The highest frequency occurred between 9 p.m. and 2 a.m; in the six-year period MinnPost studied, 2,890 incidents took place during these nighttime hours, or about 57 percent of shots fired. That still leaves a significant number of shootings for the daytime, however. ShotSpotter recorded more than 600 incidents between 9 a.m. and 4 p.m. over these years.

Shootings also pick up during the warmer months. About 60 percent of shooting incidents took place between May and October. The highest-frequency months were June and July, which collectively saw 1,316 — or about 26 percent — of total shootings recorded by ShotSpotter. January and February, usually the coldest months of the year, had the least amount of incidents, with 307 and 253 shootings, respectively.

4. It’s extremely rare for shootings to result in immediate arrests

Tracking shootings doesn’t always mean officers get to the scene in time to make an arrest. Out of the 5,029 dispatches to ShotSpotter activations, a mere 51 resulted in bookings in the six-year period, according to the data. Most commonly, the officers arrive to an empty street corner or address. About 575 cases were canceled or deemed unfounded or false, meaning there likely was no shooting. Here's the breakdown of dispatch outcomes:

The low booking count doesn’t necessarily mean ShotSpotter didn’t eventually lead to an arrest. Gerlicher says investigators frequently follow up on ShotSpotter incidents and use the information to track down suspects in days or weeks after the shooting. In other cases, investigators use ShotSpotter to prove or disprove details of an incident, such as how many shooters were involved.

Also not measured in these statistics is how effectively the technology acts as a deterrent to would-be shooters. Police purposely don't disclose the exact locations of the microphones to make criminals think twice about firing a gun, says Gerlicher.

“If you’re a criminal out there and you go to fire a gunshot outside in the city of Minneapolis, we want you to believe ... Shotspotter will be listening,” he says.

Six years of shootings: Where and when gunfire happens in Minneapolis

By Andy Mannix and Tom Nehil