As America barreled toward Tuesday’s election, the conventional wisdom was that Donald Trump, the now president-elect, would not do well in Minnesota.

In one sense, that’s true. On Tuesday, he was the 11th consecutive Republican nominee to lose the state’s electoral votes. But he finished just 1.5 percentage points behind Democrat Hillary Clinton, which is a very slim margin compared to President Barack Obama’s nearly 8 point margin in 2012 and more than 10 point margin in 2008.

Trump and Mitt Romney, the Republican who failed to defeat Obama here, and ultimately, in 2012, got about the same share of Minnesotans’ votes for president — just shy of 45 percent. In terms of total votes, the counts were similar, too: Romney’s final vote count was within 3,000 of Trump’s 1,322,892 in Minnesota on Tuesday, according to the most recently available election results from the Minnesota Secretary of State.

But it appears as though those votes weren’t coming from the same Minnesotans, or at least not the same parts of the state, MinnPost found in an analysis of precinct-level results from the 2012 and 2016 elections. 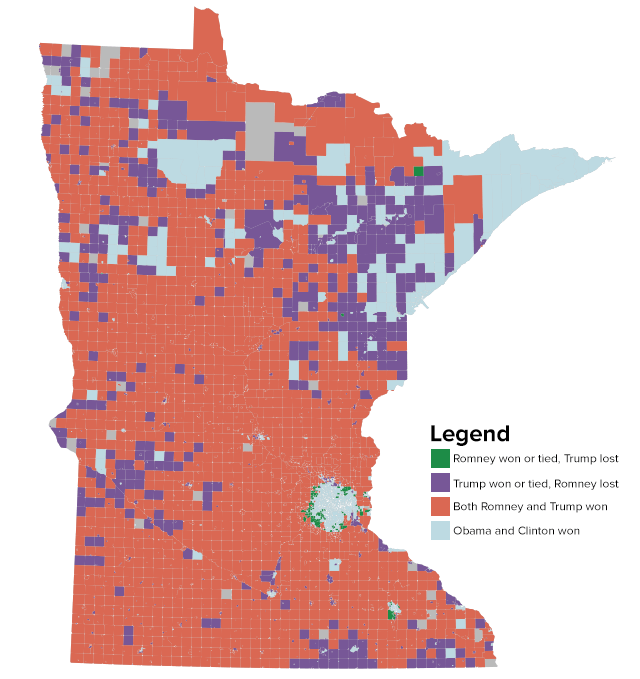 Trump in the north

Trump did better than Romney across much of northern Minnesota, from precincts around East Grand Forks, north of the largely blue Red Lake Indian Reservation area, and across Minnesota’s Iron Range.

Many parts of the state where Trump won precincts — where farming and labor are big economic drivers — were historically DFL strongholds.

But the times may be a-changin’.

“A Republican hasn’t won the presidential race in Hibbing since Hoover,” he said.

Brown was involved with DFL Rep. Tom Anzelc’s re-election bid. Like many DFLers, Anzelc lost — and by a lot, despite pre-election polls that suggested he’d do OK, Brown said.

Brown thinks people involved in politics believed Trump would could do a bit better than the average Republican on the range, but that Democrats would still do all right.

But, he said, “a lot of people who were not leaders, per se … just regular folks, seemed unsure of who might win, and I think of that as a big clue that something was going on in the way people were talking to each other. I think there was kind of a hidden revolution of sorts."

While there weren’t a lot of presidential lawn signs, Trump signs outnumbered Clinton signs by as many as seven to one, Brown said.

While Trump did relatively well on the Range, a place hard-hit by a changing economy, Eighth District Democrat Rick Nolan managed to hold onto his seat in Congress Tuesday, though by a slim margin. Brown said it’s unclear whether Trump’s success and the Republican legislative sweep in northern Minnesota is an anomaly — or here to stay.

“Rural Minnesotans have some soul searching to do to figure out who we are and who we stand for,” Brown said. “Really as far as the future goes, we need ideas to solve the problem, whether they come from Trump or someone else, or Democrats or Republicans, people want solutions.”

Romney in the suburbs

Some of the gains Trump made over Romney in northern Minnesota on Tuesday were not replicated in the Twin Cities suburbs. 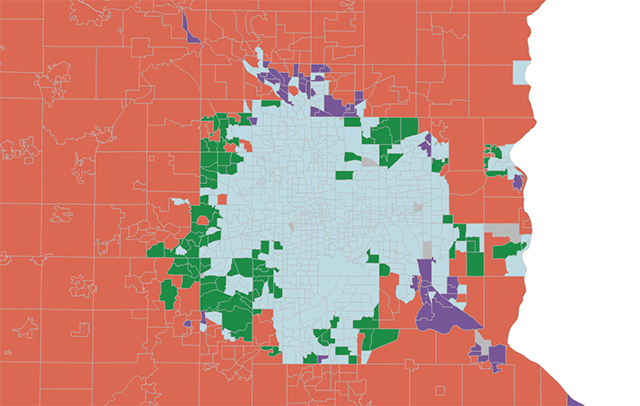 In 2012, Romney did well with voters in some precincts that ring the Twin Cities in suburbs such as Edina, Deephaven, Plymouth, Chanhassen, Minnetonka, Bloomington, Apple Valley, Eagan, Woodbury, Mahtomedi, Shakopee, Eden Prairie and Chaska.

By and large, those areas went to Clinton on Tuesday, while some precincts in areas like Coon Rapids, Blaine and Cottage Grove — where voters favored Obama in 2012 — went for Trump.

Minnesota presidential vote by precinct, 2012 and 2016
The maps below visualize the electoral margins of the Republican and Democratic candidates for president in Minnesota in 2012 and 2016. Darker blue or darker red indicates a larger margin of victory for the Democrat or Republicans. The maps pan and zoom together to allow for specific comparisons.

Where Trump did better than Mitt Romney in Minnesota, and where he did worse

By Tom Nehil and Greta Kaul