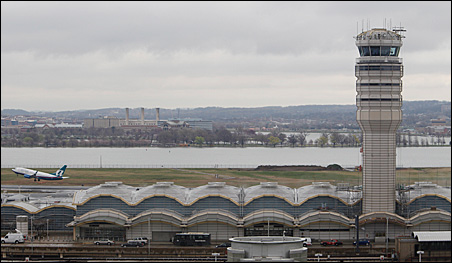 A plane approaching Reno-Tahoe International Airport Wednesday morning with a critically ill passenger hailed the tower there for 16 minutes straight while circling the airport to no response. The control tower operator was on duty, but fast asleep. Finally, with assistance by another tower in northern California, the plane was able to land.

It’s at least the fifth time this year that an air traffic controller in the United States has been found asleep on the job. Starting immediately, airports must now have at least two controllers on the midnight shift.

“I am totally outraged by these incidents. This is absolutely unacceptable,” Transportation Secretary Ray LaHood said in a statement. “The American public trusts us to run a safe system. Safety is our number one priority and I am committed to working 24/7 until these problems are corrected.”

The move seems solely a precautionary one for Duluth and Fargo, which have not been negatively mentioned in any DOT or FAA investigation. No incidents have been reported there, airport officials say.

“From a Duluth perspective, I haven’t heard of any issues with pilots not being able to reach our tower,” said Brian Ryks, executive director of the Duluth airport. “We’re a 24-hour control tower, so I don’t see any impact aside from that they’ll have an additional person.”

Most control tower employees are hired by the Federal Aviation Administration, and administrator Randy Babbitt said there will be an independent review of the FAA’s safety trainings.

In testimony to a House committee Wednesday, Babbitt revealed several other incidents at airports in Seattle, Lubbock, Texas, and Knoxville, Tenn. In the Knoxville incident, a controller apparently made a bed out of couch cushions to aid in sleeping. After being roused by a colleague, the controller woke up and handled flights, but then went back to sleep after the colleague left.

“Air traffic controllers are responsible for making sure aircraft safely reach their destinations,” Babbitt said. “We absolutely cannot and will not tolerate sleeping on the job. This type of unprofessional behavior does not meet our high safety standards.”

Both towers in Duluth and Fargo are 24-hour towers, so the airports are technically open every second of the day. But overnight is a relatively slow time for passenger service.

In Duluth, the last passenger plane of the night, United 6841 from Chicago, arrives around 11:15 p.m. The first morning flight out, Delta flight 3926 to Minneapolis-St. Paul, leaves more than four hours later at 3:25 a.m., and then it’s a nearly three-hour wait before three planes go out (to Detroit, Chicago and MSP) between 6 and 7 a.m.

“Only in the federal government would you double up on workers, averaging $161,000 per year in salary and benefits, that aren’t doing their job,” Mica said. “This increase in staffing, when there is little to no traffic, also misdirects our resources and focus away from congested air traffic control facilities.”

Rep. Chip Cravaack, a former pilot and vice-chairman of the Aviation subcommittee whose district includes the Duluth airport, could not be reached for comment.

Ryks complimented the employees who work at his airport in Duluth, saying the FAA has “wonderful employees and they take their job seriously.” And while not endorsing or rejecting the move, he said his expectations are that airport towers to be operational if they’re manned at all.

“Let me put it this way,” Ryks said. “If my employee is supposed to be working the night shift, I expect that employee is working.”