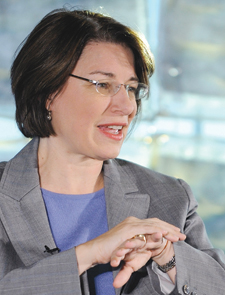 WASHINGTON — Personal financial data for members of Congress went public on Thursday, and only six members of the Minnesota delegation got their disclosure forms in on time.

As for the rest of the delegation, the financial disclosure forms reveal a bit about how lawmakers made their money last year, outside of their congressional salaries. Lawmakers are required to report their financial holdings and their debt, and under rules instituted by new congressional ethics laws pushed by Rep. Tim Walz, any home mortgages they might have. Members do not need to report the exact value of their assets or debt, and as you’ll see, the broad reporting ranges make it hard to nail down exactly how wealthy they really are.

You can sort through the Center for Responsive Politics’ database of congressional finances here to see how these numbers compare to what Minnesota’s lawmakers reported last year. Reports for House members can be found here, and Sen. Amy Klobuchar’s filing (the Senate has not posted its reports yet) is here.

Sen. Amy Klobuchar (D) has a net worth between $310,000 and $1 million, potentially making her the wealthiest member of the delegation whose disclosures were available Thursday (Franken, Bachmann and Cravaack reported potential million-dollar net worths last year). Klobuchar reported no debts and most of her assets are held in mutual funds and life insurance policies. She also has a $50,000 to $100,000 college fund set up for her daughter.

Update: Klobuchar’s office says “her actual money reported is somewhere in the middle of the range.”