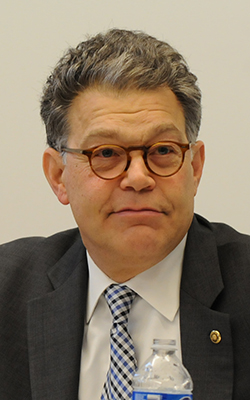 Franken summoned Facebook to a hearing of his Judiciary subcommittee on Wednesday to talk about its use of facial recognition software and the data it collects to help users identify friends that might be present in photos they upload.

He repeated what has been a common refrain during his time as chairman of the privacy subcommittee: Expanded technologies that are slowly bringing down the walls of privacy for the modern American are fine advancements and should be used freely — as long as people have the opportunity to actively choose to use them.

In Facebook’s case, that means a facial recognition software called “Tag Suggestions,” an opt-out-only service that allows Facebook to store a user’s facial features, or “face print,” then scan that user’s friends’ newly uploaded photos and guess as to the identity of those in the picture. The software has been in use since 2010, though it’s offline for technical maintenance for now.

Facebook users upload 300 million photos a day, by the social networks’ count. For members who upload reams of photos at a time, Tag Suggestions should theoretically end the repetitive process of going through each one and tagging the friends that are included, Facebook privacy and public policy manager Rob Sherman said.

But Franken saw potentially serious privacy implications for users who don’t know Facebook is mining such information, and don’t want it to do so.

“Facebook may have created the world’s largest privately held database of face prints – without the explicit consent of its users,” he said. “Unless you have taken the time to turn it off, it may have already been used to generate your face print.”

Sherman said the face prints the site collects are solely for use in the Tags Suggestions program. Facebook does not provide them to third party software and doesn’t sell them to other companies. The face prints are carefully encrypted on Facebook’s servers and protected from tinkering by Facebook’s employees. The face prints are not given to law enforcement and, in fact, are so tailored to Facebook’s uses that they wouldn’t be valuable to anyone else, anyway. A user’s face print is private, unless someone is tagging his photos, and users can opt out of them if they so please.

But Franken had concerns with the way the Tag Suggestions system is implemented: “Why doesn’t Facebook turn its facial recognition feature off by default, and give its users a choice to turn it on?”

Facebook has safeguards in place for users who might be uncomfortable with the use of their faces, he said. Members who use Tag Suggestions can only do so for their friends, and only if their friends have allowed their faces to be gleaned for the Tag Suggestions process. And the company’s Data Use Policy describes the software, and users can opt out if they please.

But Franken jumped on that point. Holding up a screenshot of Facebook’s privacy settings page for the Tag Suggestions program, Franken said it takes a full six clicks to find any mention of facial recognition software. When Sherman said the page links to a FAQ page detailing the system, Franken produced a copy of that page as well: a busy wall of text with no clear reference to facial recognition.

“I just think that this information is so sensitive that it’s the type of things users ought to opt themselves into,” he said.

A handful of other experts who testified before Franken’s committee did little to assuage his concern that Facebook, and social media in general, could begin sharing facial data without abandon.

Carnegie Mellon privacy expert Alessandro Acquisti, for instance, warned there is nothing stopping Facebook or others from slowly expanding the availability of facial recognition data, via Tag Suggestions, to individuals other than a person’s Facebook friends.

Nita Farahany, a Duke University law professor, boiled the matter  down to a more basic concern: As technology changes, people are growing more comfortable with what information is capable of being collected, while still having reservations about how such data are used.

“I think Facebook and other social media are changing our expectations of privacy … what does society expect to be private?” she said. “It doesn’t seem like facial recognition itself is something anyone is afraid of. It’s linking it to other information that people are frightened by. There’s nothing inherently frightening about having your face seen. It’s the aggregation of data that frightens people.”

That’s why, Franken said, individuals should be directly in control of how much information they share.