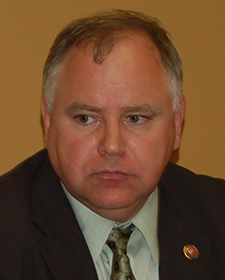 Walz, who calls himself a “strong supporter of second amendment rights,” has a fairly moderate voting record on gun control, at least in the NRA’s eyes. The group endorsed him in his re-election campaign against a Republican opponent who heralded an A+ grade of his own from the organization. The Star Tribune notes Walz was one of 65 Democrats to sign a 2009 letter opposing a new ban on assault weapons like the one that lapsed in 2004.

In a Tuesday interview, Walz stopped short of endorsing measures to reauthorize the assault weapon ban, though he said he would look at proposals along those lines. He called for an increased emphasis on background checks and greater penalties for people who obtain guns illegally, and said he wants to find some sort of compromise between gun rights supporters and gun control advocates who say Newtown should finally bring about new gun laws.

“If someone is a law abiding citizen [and] they have the capacity, mentally, to be able to handle this, [then] they have the right to purchase and conduct their activity where it doesn’t interfere with others,” Walz said. “But I also think there needs to be safeguards in there with the understanding, not all people are responsible.”

The NRA, which has been silent since the shootings, said it will hold a Friday press conference to announce “meaningful contributions to make sure this never happens again.” In the days since the shooting, a handful of traditionally pro-gun Democrats have softened their stance, opening the door to considering more gun control in the future.

Walz said he senses the shooting has inspired the public to call for more gun control than any of the mass shootings before it, perhaps because of the young age of the victims (the children were all six- and seven-year-olds).

“It focused the public, and when the public is focused, we’re focused,” Walz said. The only positive outcome, he said, is “if in the long run it focuses us to do all we can to prevent another one of these situations.”