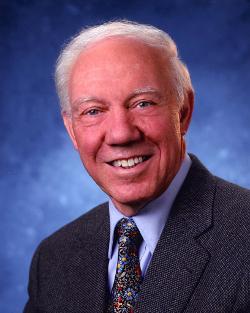 WASHINGTON — Former U.S. Rep. Jim Oberstar, who represented northeastern Minnesota in Congress for 36 years, died in his sleep early Saturday. He was 79.

Oberstar, a DFLer, was elected to Congress in 1974 and served until 2011, making him the longest-serving Congressman in Minnesota history. He was a strong supporter of federal transportation and public works projects, a long-time member of the House Transportation Committee and its chairman between 2007 and 2011, when he left office after a surprise electoral defeat. A portrait of Oberstar hangs in the Transportation Committee Room in the Rayburn House Office Building.

Oberstar represented Minnesota’s 8th District, and he’s credited with securing millions of dollars in federal funding for the state during his long tenure, thanks to his position as head of the Transportation Committee. Jason George, the political and legislative director for the Local 49 operating engineers union, said, “we never had a better champion in our entire Local history than Chairman Oberstar.”

“He really believed in infrastructure and transportation and the jobs it creates,” George said. “He really cared about the men and women that built our country.”

Funding for highways, airports and bikes

Oberstar was born on September 10, 1934 in Chisholm, Minn., the son of an Iron Range miner. He earned political science and French degrees at the University of St. Thomas, and he studied in Belgium, Quebec and Washington, D.C. before joining the staff of U.S. Rep. John Blatnik. He worked as administrator of the Committee on Public Works for three years until he was elected to Congress in 1974, succeeding Blatnik.

Over his tenure, Oberstar had a generally liberal voting record but also championed causes close to his district, especially mining and labor. His constituents rewarded him with what were often double-digit re-election victories before he was defeated by Chip Cravaack in 2010, caught up in a Republican wave. Democratic U.S. Rep. Rick Nolan now represents the district.

“It’s a devastating shock,” Nolan said Saturday from Duluth. Nolan and Oberstar had gotten together just this week, he said. “Jim Oberstar’s death is a tragic loss for his family, his friends, his state, the nation and all of us up in northeastern Minnesota.”

Oberstar devoted his entire public career to improving transportation and infrastructure, chairing first an aviation subcommittee early in his congressional tenure and then the full Transportation Committee for the final four years of his career.

Bill Richard, Oberstar’s long-time friend and chief of staff, said Oberstar was most proud of the way he managed to dole out federal transportation dollars to all the various industries that wanted them, from highway and rail and aviation all the way to bicycling — Oberstar, a bicycling enthusiast, told MinnPost in 2011 that he rode more than 1,400 miles the summer after he left Congress.

“His view was, you’ve got to make peace between those modes, and the way you do it is to get them enough funding so they don’t fight among themselves,” Richard said.

Oberstar was proud of his Iron Range heritage, Richard said — his father Louie was the first card-carrying Minnesotan of the United Steelworkers. In the 1980s, Oberstar attached an amendment to a transportation funding bill mandating projects use only American-mined steel, a requirement Richard said endeared Oberstar to the mining industry he represented.

“He was the complete package in terms of being a congressman,” Richard said. “He put people first, the district first, and never tired of working for them.”

Aaron Brown, an Iron Range writer and former DFL operative, credited Oberstar’s work on transportation projects with building the range up over his tenure. He was a “steadfast voice” on labor issues during his time in office, Brown said, and that secured support from the range’s union workers.

But Oberstar contributed more than just infrastructure improvements and new public works projects, Brown said. He was also able to hold together a political coalition of social conservatives and economic liberals who were focused on improving the range first and foremost.

“He was obviously a Democrat and carried a lot of water on Democratic issues for the region, but I think what he really did was connect many different generations and many different groups that lived here, and despite the dramatic partisan changes between the two parties, he kept a coalition together that made a lot of sense for the Iron Range,” Brown said.

At a press conference the day after his 2010 electoral defeat, Oberstar listed off a series of 8th District-specific projects he was most proud of: new bridges along Interstate 35, a new airport terminal in Duluth, a customs and border control facility in International Falls and the Gitchi-Gami State Trail along the North Shore. Projects like these, he said, “will be there long after I leave office.”

Oberstar kept a tally of his work on the Transportation Committee, as well. In his 2010 House farewell speech, he highlighted the committee’s work during his chairmanship: 317 hearings covering 1,028 hours, producing 179 public laws and resolutions.

He took credit for provisions in the 2009 stimulus act that he said created 1.3 million construction jobs.

“I can look back on my service and say, I’ve given it my best, I served the people to best of my ability and to the gifts that the good Lord has given me, and that my parents stimulated in me,” he said.

Minnesota lawmakers: Oberstar a mentor and a friend

Members of the Minnesota congressional delegation lauded Oberstar on Saturday as a mentor, a friend and a focused and successful lawmaker.

Nolan, who served alongside Oberstar in the House in the 1970s, said he still sees Oberstar’s influnce everywhere he goes in the 8th District.

“You can’t get together with people anywhere here in the 8th District without listening to stories or reveling in tales about what Jim Oberstar did for this district,” he said.

“His purpose? To make life better for the people of northern Minnesota and our world,” Sen. Amy Klobuchar in a statement. “His method? Knowing all the facts and never giving up just like the people he represented.”

Gov. Mark Dayton called him “a true champion for the people of the 8th District, and for our entire state.

“He worked tirelessly to bring jobs, economic growth, and a better quality of life to his constituents,” Dayton said in a statement.

“Our country and its infrastructure are a better place because of the work of Jim Oberstar,” Rep. Collin Peterson said in a statement. “He was a brilliant man and a dedicated public servant.”

Rep. Betty McCollum said, “Throughout his career Jim’s commitment to improving America’s transportation system saved thousands of lives, kept millions of Americans on the job, and strengthened Minnesota’s and our nation’s economy. Most of all, Jim Oberstar was a truly wonderful man who was filled with joy and compassion.”

Rep. John Kline said Oberstar was a “compassionate advocate for residents of northeastern Minnesota and I enjoyed serving with him in Congress while he was the dean of our delegation.”

Rep. Erik Paulsen, who served with Oberstar for one term, said “Jim’s legacy will be felt by me and the rest of the Minnesota delegation for years to come.”

Oberstar was a “titan of the Transportation Committee,” said Rep. Tim Walz, who serves on the committee. “Jim put people before politics and always fought tooth and nail for his constituents. He was the true definition of a public servant and someone I was proud to call a mentor and friend.”