WASHINGTON — By all accounts, the Bug-O-Nay-Ge-Shig School needs help.

The school serves nearly 200 students on the Leech Lake Indian Reservation in Northern Minnesota. Part of it is housed in a former barn, converted into what was supposed to be a temporary school building in 1984. Thirty years later, it’s still occupied, it fails to meet fire and health standards, it’s riddled with mold and fungus and rodents and lacks such basic security measures that police have taken to dubbing it “Killer Hall.”

Students are in dire need of a new building — in 2011, an Indian Affairs secretary said, “preliminary evaluations indicate that the building should be replaced.”

The Bug School’s problems are emblematic of the country’s 183 Bureau of Indian Education schools, one-third of which are in desperate need of repairs or replacement.

But funding has been in short supply. For the last two years, the Obama administration hasn’t requested any money to replace a small handful of schools that have needed new facilities since at least 2004. His request for next year covers construction for only one school.

The lack of funding is especially galling for Indian education advocates given the way the federal government funds the second education system it runs, for the Department of Defense. In 2010, the DOD established a list of 134 schools that need replacing or modernizing, at a cost of $3.7 billion, and they hope to finish the project by 2018.

Indian education advocates say BIE needs its own, updated list of replaceable schools, and administration officials said one could come out as soon as this year. Minnesota Rep. Betty McCollum said the government is bretraying its “trust and treaty obligations” with Indian tribes the longer their schools sit in disrepair.

This year, the House plans to appropriate $65 million to build a single new 275-student DOD school in Guantánamo Bay. The House has yet to release its Indian Education budget for next year, but its 2014 total was paltry: just $954,000 to begin planning a replacement school in Maine, and $55 million for construction and repairs across the whole system.

“When we needed to build [the Guantánamo] school and get it right for those children, we came up with the money to do that,” McCollum said. “We can do that for the other American children in this country, too. It shouldn’t be an either-or. All children are deserving.”

Funding for Indian schools falls under a couple of McCollum’s legislative purviews.

She’s Minnesota’s only member of the budget-writing Appropriations Committee and the future top Democrat on the committee’s Interior panel, which handles Indian Affairs funding. She’s also the co-chair of the House Native American Caucus, and she said improving tribes’ schools would help everything from Native American graduation and literacy rates to reducing suicide among tribal teenagers.

To be sure, McCollum also supports the DOD’s rebuild effort. But she said lawmakers aren’t paying enough attention to Indian schools and their 48,000 students. In April, when the Guantanamo funding was announced, she said it amounted to “inequality.”

After McCollum joined Congress in 2001, “people were coming in, lobbying for more impact aid, both the DOD and the Bureau of Indian school parents were coming in together, to get that number up for dollars for resources for their children,” she said.

At one point, she said, military parents came in to talk about personal fundraisers designed to raise money for air conditioners in schools.

“That kind of got everyone’s attention because people were paying attention to what was going on on the military bases because of the Iraq War and the Afghan War, so people kind of tuned in to service members and their family’s lives,” she said.

McCollum also started touring schools on Indian reservations around the country. In New Mexico, she saw a school so badly ravaged by an earthquake that there were open cracks in the walls. In South Dakota, the roadways leading to Indian schools were so bad “school buses literally deteriorate on the road’s they’re traveling on.”

The Bureau of Indian Education gave Congress a list of schools it wanted to replace in 2004. Congress pumped tens of millions of dollars into the program for a few years, funding 38 replacement schools or facilities between 2002 and 2011, according to a 2011 report on BIE construction.

col.bie.edu
An architectural drawing of the Circle of Life school.

In 2005, a BIE school on Minnesota’s White Earth reservation began receiving funding for a new $16 million building. The reservation’s old facility had leaky walls and roofing, education director Joan LaVoy said. In the 2004 report, it was ranked sixth on the list of most needed replacement schools.

An outside agency “basically said we shouldn’t even be in that facility,” McVoy said. “We were in a very, very poor facility.”

Their new building, the Circle of Life School, opened two years ago — thanks to both federal and tribal funds — and “it’s beautiful,” McVoy said, with a new football field, large gymnasium and state-of-the-art technology in it’s classrooms.

Repair and rebuilding efforts received more than $244 million in the 2009 stimulus act, but Obama administration funding requests for new schools have slowed since then. While the Department of Defense asked for $2.7 billion for new school construction in 2013, Indian Affairs hadn’t requested replacement funding since the 2011 fiscal year. The Bureau is asking for $3.2 million for construction funds in 2015, and there are still three major projects left over from its 2004 list, at a cost of $58.6 million.

Congress hasn’t exactly helped, either: An early draft budget for 2014 included enough funding to nearly zero-out that list, but it didn’t make it into the year’s final funding package. McCollum said she thinks lawmakers would move quickly on school construction if they had a thorough overview of what school buildings need replacing, like the DOD’s.

“We need to get a list of what we can do in repair and maintenance and what needs to be fully replaced,” she said. “Because I haven’t seen that list, I don’t want to just pull a pie in the sky number and be stuck with it.”

A Bureau of Indian Affairs spokeswoman said the department is crafting a new replacement list and a funding plan to upgrade BIE facilities within six years. The list could come out this year, and the three schools left over from the 2004 version — two in Arizona and one in Maine — will be included.

In the meantime, Indian education advocates have asked for a big boost in repair and replacement funding. Using a government formula, about a third of BIE schools are rated as “poor,” and getting them up to satisfactory levels could cost as much as $1.3 billion.

The National Indian Education Association suggested more than $263 million annually in 2013, and Bug School superintendent Crystal Redgrave told the House Appropriations Committee in April that it should budget $200 million a year until the construction backlog is reduced. 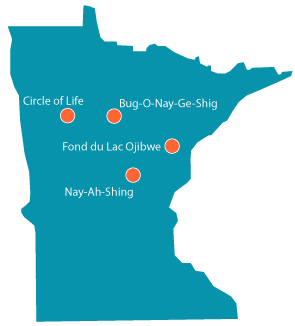 Minnesota has four BIE schools, but the Bug School is the only one rated in “poor” condition. It would cost more than $23 million to get it up to acceptable levels. McCollum called it “the poster child for many schools all over the country which are inadequate physical structures for our schools to be in.”

Tribes to get more control over schools

Before Obama’s visit to a North Dakota reservation last week, the Department of Indian Affairs released a new set of guidelines meant to give tribes themselves more control over their BIE-funded schools. The administration still needs to fill in the funding details, but NIEA executive director Ahniwake Rose said she expects to see a bump up in replacement and repair funding for old school buildings.

She said the schools badly need it. Some tribal schools are still using chalk boards, or struggling to offer broadband Internet, while students elsewhere have a massive technological leg up — Baltimore City Public Schools, for example,  plans to arm every student with tablet or laptop.

“The way your school looks is a direct reflection of the way students feel about their learning environment,” Rose said. “If you know you’re not valued, you’re not going to want to go to school.”