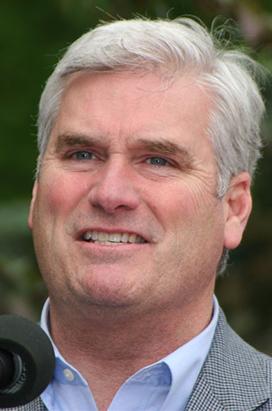 WASHINGTON — Tom Emmer went for an early-morning run in the congressional gym and was in the office early on Tuesday, swearing-in day for the new congressman from Minnesota’s 6th Congressional District.

When Emmer was in the state Legislature, he said, he would start his days as early as 5 a.m., so if anything, the early start was familiar, even reassuring.

“The best time you had was when it was quiet, and you could read and do the stuff you needed to do,” Emmer said. “This morning was probably the first time when it was like, you know what, this is going to happen.”

Emmer knows there will be a learning curve, a steep one, to his new job in the U.S. House of Representatives, where he formally took over for Rep. Michele Bachmann on Tuesday. He has often spoken of the limited influence of freshman members, like himself, who come to Washington without any high-powered allies.

While he recognizes he has a lot to learn, Emmer is using  the lessons of his six years in the Minnesota Legislature as a reliable guide to his new job in Congress, from his experience with legislative issues and the personalities of his fellow members, to the very way he plans to study the legislation on which he’ll soon be voting — even though he acknowledges the Legislature isn’t a perfect parallel to the U.S. House.

Take, for example, the very act of reading legislation.

In Legislatures in Minnesota and around the country, lawmakers are given both the amended and original versions of legislation they’re set to vote on so they can see the changes within it. Not so in Congress, Emmer learned at a Republican conference meeting Monday night.

Emmer said he tried to read as many actual bills as he could in St. Paul (a habit his old legislative seatmate, Rep. Erik Paulsen, later confirmed), but he acknowledged that will be harder in Washington. As of Tuesday morning, he said he hadn’t even gotten around to looking at much of the GOP’s first week legislative line-up.

“I’ve been told that’s much too big a hill to climb around here, that you’ve got to be a little bit more judicious, a bit more strategic with your time, so that’s what I’ll be trying to figure out,” he said.

‘The analogy is baseball’

Emmer’s office is a so-far bare space on the fifth level of the Cannon House Office Building. It’s a floor so far out of the way that many elevators can’t reach it, one traditionally relegated to freshmen members who suffer the fate of a poor draw in the office space draft.

During the campaign and after his election, Emmer spoke a lot about the importance of building relationships with the colleagues on the floors below him, those with more experience and more cachet. He was told early on to expect to find a cast of characters with traits as varied as those in a state Legislature, just playing the game at a much higher level.

“I told this to somebody else, who told me, look the analogy is like baseball,” Emmer said. “Every level you move up, the athletes get bigger and faster and stronger and he said, it’s the same here. When you get here you might feel a little bit of that and you just have to do the work because then the ball will slow down and you will see it.”

Not everything has gone the way Emmer has planned, most notably his committee assignments.

Emmer had hoped to land spots on two of three committees: Agriculture, Transportation or Financial Services. Leadership assigned him Agriculture and Foreign Affairs instead.

Emmer’s not complaining, and after talking with Minnesota farmers, he finds the combination an intriguing and complimentary one. The Ag committee deals with emerging export markets, for example, while Foreign Affairs handles trade deals.

But Emmer said that when committee assignments came down, he expected to get Agriculture and Transportation, a subject he made the focal point of one of his few television ads last fall. He said he still hopes to be involved in the issue, and he’s talked with Sen. Amy Klobuchar about what can be done there.

The group hasn’t given him any advice, per se, Emmer said, except for an implicit reminder that despite their political differences, they’re all working toward the same goal — just like in the Legislature.

“What I’ve gotten is, this is what I did in the state Legislature, this is what I’ve done in my professional career. I’m going to do the same thing here, hopefully with some more wisdom and some more experience,” Emmer said. “Regardless of what jersey you wear, at the end of the day, we are the Minnesota delegation. I’m the newest member. It means I get to walk at the end of the line; I get the last chair of the table. Whatever it might mean, I still have a voice and I still have the ability to help the state of Minnesota.”

Welcome to the big leagues: Emmer makes the move from Legislature to Congress