This dynamic might sound familiar: In an important, competitive election, Democrats have more or less coalesced around a front-runner, while Republicans, split among four candidates, face a protracted contest to figure out who their nominee will be.

On the DFL side, Angie Craig has been the party’s de facto standard-bearer since Mary Lawrence dropped out in January, and she’s currently doing the things needed to mount a strong campaign in the general — picking up key endorsements and focusing on fundraising.

As campaign season ramps up, none of the four Republican candidates seems to have a clear edge. With the endorsement process still some weeks away, 2nd District GOPers haven’t hit the panic button yet, but there are concerns that a drawn-out nominating process could weaken the party’s effort to keep Kline’s seat red.

The four candidates occupy different niches, which could make consolidating broad support a difficult task, at least ahead of the nominating process. According to Stephen Schier, a professor of politics at Carleton College, the race in the 2nd is “a muddle.” 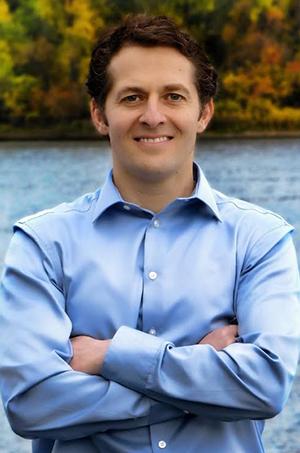 Gerson is well-known in the district thanks to his two prior challenges against Kline: A central element of his pitch to voters is “you know me.” CD2 Republicans will remember Gerson’s stridently conservative message, and his relentless attacks against Kline for not sufficiently upholding conservative values in Congress. He is well-connected with conservative activists likely to participate in the endorsing process.

Howe, who represented Red Wing in the Minnesota Senate, is seen as one of the “establishment” choices in the race. The property owner and former Red Wing mayor cuts a more moderate profile in the CD2 field, and earned a reputation during his two years in the Legislature as a conservative who was still willing to work and compromise with DFLers, sometimes to the dismay of his more hard-line colleagues. This cycle, Howe is touting his conservative bona fides — pro-life, anti-gay marriage, anti-tax – in campaign materials and ads. 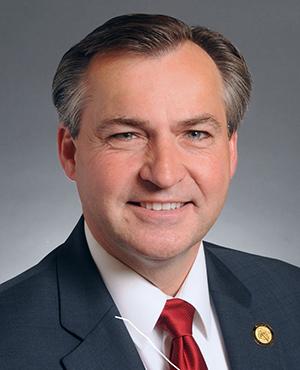 Miller, CEO of Permac Industries, a manufacturing company in Burnsville, has never held political office, but is nevertheless seen as an establishment candidate, and perhaps the one best positioned to take on Craig in the general election. An indicator of that is, while Kline has not yet formally endorsed anyone, he appears to be leveraging his formidable fundraising network to benefit Miller: Last week in Washington, Kline, along with three GOP congresswomen, hosted a fundraiser for her.

Finally, the wild card in the mix is undoubtedly Lewis, the former radio host and commentator who probably enjoys the most name ID in the district. A libertarian-leaning conservative with a penchant for stoking controversy, Lewis has an outsider brand and is suspicious of the GOP establishment, and vice versa.

No clear front-runner yet

Seasoned political hands in the district and around the state say that no one candidate appears to have an edge at this point. That may change after fundraising numbers from the 1st quarter of 2016 are released; those reports will be critical in revealing which campaign has the organization and institutional support needed to succeed in each stage of the electoral process. 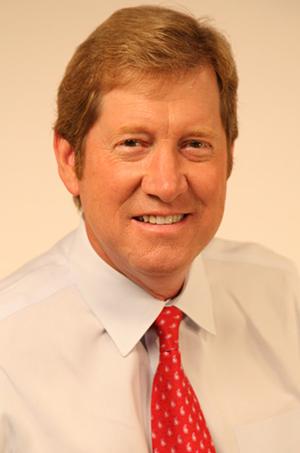 John Rouleau, who runs the conservative Minnesota Jobs Coalition political committee, told MinnPost that, “at this point, I don’t think there’s a clear front-runner in the race. People I’m hearing from are interested in how 1st quarter fundraising will work.”

The fundraising picture is particularly murky right now, mainly because Miller was a late entry into the race. The first-quarter numbers, which become available in mid-April, will be the first real indication of how strong her organization is. She’ll need to pull in a huge sum — some Republicans say $300,000 at the very least — to demonstrate her viability.

Beyond that, many in Republican circles were disappointed with the 2015 fourth-quarter numbers that the three other candidates put up, particularly Lewis, who raised just north of $100,000 during that time period. Given his profile, he was expected to make a bigger splash upon entering the race.

By comparison, last year’s fourth quarter was Craig’s weakest fundraising quarter yet, but she still raised over $150,000. After a strong opening quarter, and taking out $375,000 in loans, Craig has nearly $1 million in cash on hand.

The situation was bad enough to prompt Kline to admonish the candidates to the press. In February, he said he was “a little bit concerned by the fundraising that was shown by the Republicans who were in for the January filing,” according to the Pioneer Press.

While Kline’s language was measured, his comments can be read as otherwise: a signal for the GOP candidates to get their acts together. It’s uncommon for an outgoing lawmaker — much less a respected team player like Kline — to call out his own party in such a public way.

Washington’s eyes fixed on the Second

The Democratic Congressional Campaign Committee, the party’s fundraising and messaging arm for its House candidates, made hay of Kline’s comments, crowing in a press release that “Washington Republicans [Are] Giving Up on MN-02.” 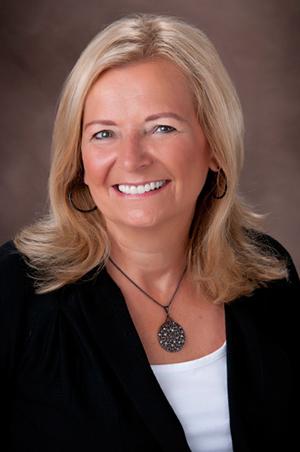 Fueling that notion, the DCCC slotted the 2nd District in its “red-to-blue” program, which identifies Democrats’ most promising pickup opportunities. The GOP has yet to do something similar: 8th District candidate Stewart Mills is in the National Republican Congressional Committee’s “young guns” program, but no CD2 candidate is at this moment.

Washington Republicans are likely waiting to see how the race develops. But some in Minnesota believe that if Lewis gains momentum and becomes the nominee, his record of controversial statements could doom him. “His long career in talk radio has created a rich environment for a general election opponent and a primary opponent,” Carleton’s Schier says.

Tellingly, the Craig campaign has begun to treat Lewis like a general election opponent. In fundraising emails, her camp has blasted Lewis — who is referred to as Craig’s “top far-right opponent” — for inflammatory comments he made about women. It’s a sign, observers say, that Democrats believe they can beat Lewis in the general.

But CD2 Republicans aren’t panicking, and they dispute the idea that the momentum has swung decisively, or at all, this early in the race.

According to Luke Hellier, a longtime GOP strategist, “Republicans can narrow the field and figure some stuff out, it could change very quickly.” He explained that the national GOP is likely watching and waiting to see how the endorsement process shakes out before committing to a candidate.

“I don’t think Angie Craig is getting that much stronger by the fact there’s still a wide open field on the other side,” Hellier said, adding that he doesn’t believe there’s a clear front-runner, but if there is one, it’s Lewis. 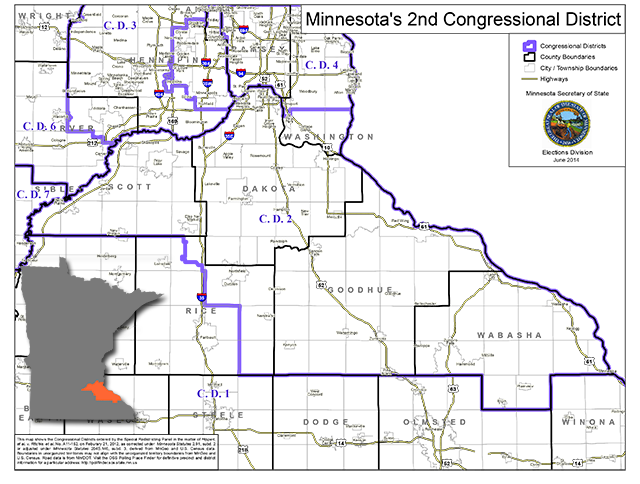 Republicans are optimistic that the field might narrow further soon, which would likely leave those in the district to choose between a conservative and someone more moderate. The conventional wisdom in Minnesota, Rouleau explains, has usually been that a more conservative candidate is best positioned to pick up the party endorsement, while a more moderate candidate would run a primary challenge.

State Rep. Pat Garofalo, who represents Farmington, says Lewis is probably best positioned to win the endorsement but that Gerson is in the mix. “The August primary election,” he adds, “will be a battle — and I do mean a battle — between the endorsed candidate and Darlene Miller.”

But that might not exactly be how it happens, Rouleau says, bringing up the example of Mike McFadden’s 2014 U.S. Senate run, in which he won the party’s endorsement over more conservative competitors. “The conventional wisdom was turned on its head before with McFadden, a businessman who’s not a politician and put together an effective strategy and was able to get the endorsement.”

Hellier emphasizes that the situation will become clearer in a few weeks, when delegates are elected to begin the Minnesota Legislature candidate-endorsement process. Who shows up to precincts then, he says, will give people a better idea of who will show up at the nominating convention for CD2 candidates — and an inkling of which candidate might be able to build support for the endorsement.

At this point, GOPers in the district agree it’s a true toss-up, and that any candidate has a shot at the endorsement and the nomination — even Miller, the late entry.

Rouleau read a bit into the results of the Minnesota presidential caucuses to back up that notion.

Last Tuesday, Minnesota Republicans voted by a healthy margin for Florida Sen. Marco Rubio, the preferred choice of the state political establishment, including Kline. Trump, the bomb-thrower, was handed his first third-place finish of the primary process so far.

The parallel for CD2 in all that was implicit.

“One of the interesting things that happened on caucus night was that Rubio did very well in the 2nd,” Rouleau said, “which bodes well for a thoughtful candidate to emerge, someone who won’t throw a lot of bombs.

“The voters of the 2nd aren’t looking for someone who will shout the loudest.”

Where things stand in the Republican race to replace John Kline