Welcome to this week’s edition of the D.C. Memo. This week in Washington: Barr shows up, Barr doesn’t show up, someone eats KFC and everyone remains upset. So let’s get on with it.

There was a notable difference between the style and tone of two career prosecutors, both running for president. Sen. Kamala Harris and Sen. Amy Klobuchar both tried to get at the heart of the Mueller report in questioning Attorney General William Barr in a Senate Judiciary Committee hearing. But Harris’ concise questions seemed to make Barr visibly flustered. During her brief questioning period, she pushed Barr to admit that he did not look over the totality of the evidence, just the report itself, before he made the decision to not prosecute President Donald Trump.

Klobuchar took the time to push Barr to defend Trump, in addition to asking for commitments from Barr’s office, like if Barr would support her legislation to improve election security amidst potential Russian interference. But he was able to delay Klobuchar’s questions with long winded answers and explanations, whereas Harris rapidly cut off Barr when she was satisfied with an answer.

Increasing the tension on Capitol Hill, Barr did not show up at today’s House Judiciary hearing, which prompted the chair of the House Judiciary, Rep. Jerrold Nadler, D-NY, to threaten to hold him in contempt.

In a CNN op-ed early last month, Klobuchar laid out an extensive plan for a clemency advisory board, a bipartisan appointed board that would help her determine who to pardon around the country, in order to more effectively use the President’s pardon power.


“Reforming the presidential pardon system through the creation of a clemency advisory board and the addition of a dedicated criminal justice reform adviser to the White House,” she wrote, “would move us one step closer to an America that’s as good as its promise.”

Vox’s German Lopez spoke to spoke to Mark Osler, a law professor at the University of St. Thomas in St. Paul, Minnesota, to break down the clemency system, as well as Klobuchar’s plan.

Another question that remains in the mainstream: if elected president, would you pursue policies that would allow people that are currently incarcerated to be able to vote? So far, only Sen. Bernie Sanders, D-Vermont, has said yes. But more than 70 civil rights groups, including the American Civil Liberties Union, the Southern Poverty Law Center and Greenpeace, are asking presidential candidates to endorse the idea.

Members of the Minnesota congressional delegation in the House voted along party lines today to pass the Climate Action Now Act, a bill to ensure that the U.S. follows through with its obligations under under the Paris Agreement. All Republicans in the delegation voted against the bill. It will now go to the Senate where it is widely expected to fail.

Quote of the week

“Chicken Barr should have shown up today and answered questions,” Rep. Steve Cohen, D-TN, told reporters, after offering out Kentucky Fried Chicken to his colleagues. 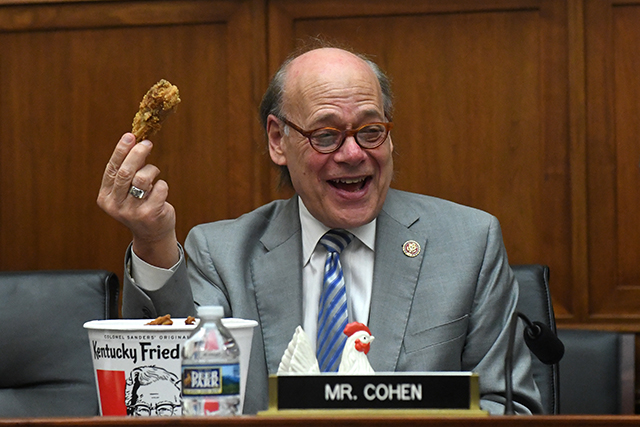 That’s all for this week. Thanks for sticking around. Until next week, feel free to send tips, suggestions, and sound advice to: gschneider@minnpost.com. Follow at @gabeschneider.