Courtesy of the National Park Service
Researcher Maria DeLaundreau is dwarfed by a
floodplain cottonwood.

When I read the other day, in a media advisory from the Mississippi River Fund, about a couple of volunteer events to plant cottonwood trees in the river corridor, I admit my first reaction was to chortle:

Really? Those blizzards of seed-bearing fluff aren’t getting the job done without human intervention?

Not everywhere, they’re not. In floodplain portions of the river’s metro reaches, the trees haven’t been reproducing for perhaps 20 years or more. Because they play some highly important ecological roles, a support program is being tested and deployed.

The problem was first quantified in a 2011 survey of floodplain vegetation by the National Park Service, which coordinates a range of environmental programming and management within the Mississippi National River and Recreation Area, a nontraditional “park” unit made up of lands owned mostly by other entities in the stretch between, roughly, Dayton and Hastings.

Next Wednesday, after many months of research and preparation,  Maria DeLaundreau will lead her first team of 25 volunteers in planting more than 2,000 cottonwoods. Her project will not only address the problem along the metro portion of the river, but will also try  to determine the best way of cultivating cottonwoods in similar circumstances elsewhere.

Much remains to be learned about cultivating cottonwoods, which up to now have not seemed worth the trouble.

DeLaundreau, who finished a degree in biology and environmental studies at Wisconsin’s Lawrence University last June, is a Minnesota GreenCorps participant hosted by the Mississippi River Fund.

She knows her cottonwoods, and was kind enough to educate me in a telephone interview on Wednesday. Excerpts from her comments follow:

Cottonwoods are important in the floodplain because they do a lot of really fantastic things. There’s a certain synergy: They are the preferred nesting tree for bald eagles, they help honeybees stay healthy, they improve fish habitat, they reduce erosion both directly – with their own roots – and indirectly by facilitating the growth of other floodplain plants.

Floodplains are very harsh on plants. There’s very often full sun in areas that have been highly disturbed by flooding. There can be a lot of scouring by floodwaters, and sediment deposits. The cottonwoods come in, providing shade, and there’s one less stressor on plants in those areas.

The shade can be good for fish, too. And while the roots of all trees hold down erosion along the banks, the large roots of cottonwoods – after some of the soil is washed away from them – provide another fish habitat.

Bald eagles prefer them because of their exceptional height. Most of the trees in a forest end up topping out at about the same level. Every now and then you’ll see one that just jumps up out of the canopy – these are called super-canopy trees – and cottonwoods are in this group.

Because eagles are so big, they don’t have the ability to maneuver in a tight space, so they really like that when they come to a cottonwood tree, there’s easy access to get inside where they can build a nest.

Cottonwoods are also very strong, which is important because eagle nests get so heavy.

Yes, you could say that they get the penthouse location. The view is also pretty great, because they like scavenging  for fish, and you can’t get any closer to the river’s edge.

They’ll hunt for live fish, too, but they prefer to find fish that are already dead, or that they can take away from other animals.

When cottonwoods are forming their buds, there’s a protective of layer of resin around them. Honeybees, and other bees, will collect that resin and bring it back to their hives and just plaster the inside of the hives with it.

It works almost like a caulk, sealing up cracks, but it also has a lot of antimicrobial properties. So it kills off fungal and bacterial pathogens that might make a colony sick. 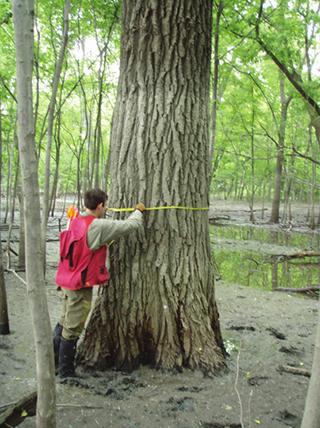 Courtesy of the National Park Service
An NPS technician measures a large cottonwood for the
2011 inventory that found no young trees.

When the National Park Service conducted its inventorying and monitoring survey in 2011, they couldn’t find any cottonwoods that had a diameter smaller than 15 centimeters.

This tells us that the cottonwoods aren’t regenerating, that young cottonwoods are not germinating and joining the forest, and haven’t been for a couple of decades, probably. It’s hard to be exact.

It’s actually hard to know how old cottonwoods are, often, because they hollow out and that makes it hard to count tree rings.

We don’t know exactly why failure to regenerate is happening. We know a lot of different factors that could be behind it:

This is an area of active research.

We’re trying to determine the best places for the restoration plantings – whether it’s an old field in the floodplain, or in a mature forest, or on a ridge along the river.

We have a test site at Lilydale Regional Park, in St. Paul, and another on National Park Service Island 108, which is in Minneapolis, directly below the Camp Coldwater Spring area.

We’re also still working on finding the best way to plant them by hand, for restoration: whether it’s better to plant seeds, or transplant seedlings, or use cuttings. Cottonwoods are kind of unique in that you can take a cutting from a sapling, or a twig, and put it in the ground and it will form roots and become its own tree. 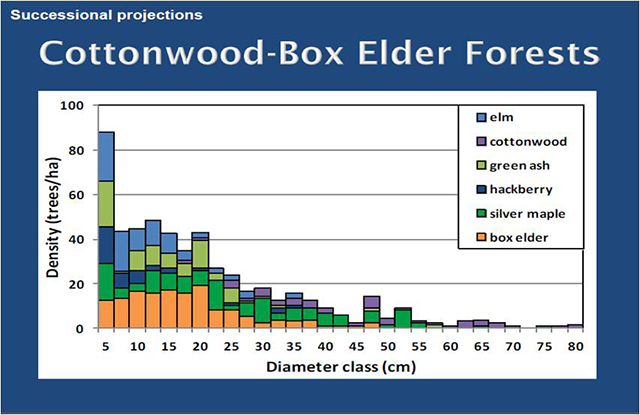 Courtesy of Maria DeLaundreau
Cottonwoods, indicated in the graph above in lavender, are practically absent in small sizes in the Mississippi River floodplains.

You would think that somebody would have figured this out a hundred years ago, such an important and basic thing, but cottonwood trees are not particularly valuable economically. Species like maple, or oak, there’s been a lot more research into the best way to grow them.

Cottonwoods are only just beginning to get that attention, as we come to understand more about their functions in the floodplain.

We’ll also have 40 plots for livestake cuttings, a total of 200 cuttings, each about two feet long. And we’ll be planting 300 seedlings as well.

We were going to plant this Saturday, too, at Island 108, but unfortunately we just made the decision today to postpone that. The water level is too high now. We’ll be setting a new date later.

We’re very excited to be working with St. Paul’s parks and recreation department on this, too. It all got started with the National Park Service, with the Mississippi National River and Recreation Area, which is a partnership park: The park service owns very little land, and most of their management is through partnerships.

As we’re doing this experiment, and determining the best way to plant, we’re really being conscious of how, if we want to replicate this, to be doing things that other city and county governments can see and do themselves.

For further reading, DeLaundreau offers links to material on bees and cottonwoods, and on livestake propagation.

Restoring cottonwoods to a healthy role in the Mississippi River floodplains