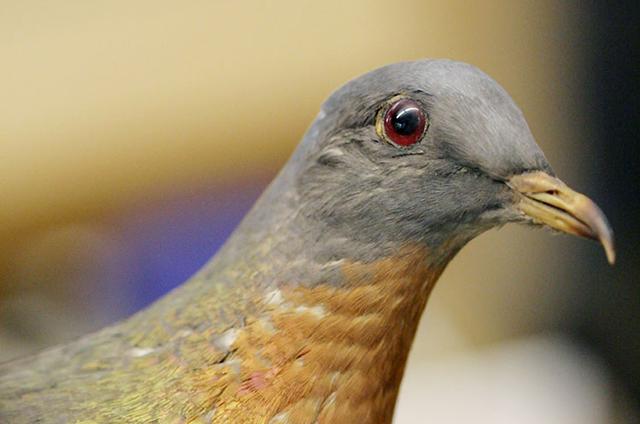 CC/Flickr/cotinis
It’s been 100 years since the last passenger pigeon disappeared from the skies.

Monday was a sad anniversary in the history of American wildlife conservation, marking the centennial of the passenger pigeon’s extinction.

We don’t usually know the date of a species’ passing with such precision, but in this case it’s well established as Sept. 1, 1914, because the last living pigeon was an inmate of the Cincinnati Zoo at the time of her demise.

She was called Martha, after the nation’s first First Lady, and may have reached the advanced age of 29, according to a fine piece in a recent Audubon magazine, despite “a palsy that made her tremble. Not once in her life had she laid a fertile egg.”

Because I grew up in the latter 1900s, I long assumed that the passenger pigeon had been erased on purpose as an agricultural pest, like the gray wolf, or as collateral damage in other pest control, like the DDT-beset bald eagle.

But that was conflating a newer kind of tragic narrative with an older one: industrial-scale “market hunting” that slaughtered wild creatures like the American bison, and any number of waterfowl, on a recklessly massive scale. The bison survived, just barely; the passenger pigeon did not.

And though the eagle edged out the turkey as Americans’ national bird, I find it pleasant to think about the honor having gone instead to this cousin of the smaller, duller mourning dove and the painted-looking pigeons that city dwellers deride as rats with wings.

Here’s a description from the Smithsonian Institution (which, by the way, has a taxidermist’s mount of Martha in its vault but does not display her):

The physical appearance of the bird was commensurate with its flight characteristics of grace, speed, and maneuverability. The head and neck were small; the tail long and wedge-shaped, and the wings, long and pointed, were powered by large breast muscles that gave the capability for prolonged flight. The average length of the male was about 16½ inches. The female was about an inch shorter.

The head and upper parts of the male pigeon were a clear bluish gray with black streaks on the scapulars and wing coverts. Patches of pinkish iridescence at the sides of the throat changed in color to a shining metallic bronze, green, and purple at the back of the neck. The lower throat and breast were a soft rose, gradually shading to white on the lower abdomen. The irides were bright red; the bill small, black and slender; the feet and legs a clear lake red.

The colors of the female were duller and paler. Her head and back were a brownish gray, the iridescent patches of the throat and back of the neck were less bright, and the breast was a pale cinnamon-rose color.

A population in the billions

Throughout the summer, from the Great Lakes region east to New York, the pigeon was a common sight and a significant game bird, as it had been before European settlement.

They might pass overhead in masses a mile wide and hundreds of miles long. Their number has been estimated at 3 billion to 5 billion birds, which at the high end would have represented 40 percent of all wild birds then living in the U.S.

In an “ornithological biography” of the bird, John James Audbon wrote of this encounter with migrants:

In the autumn of 1813 I left my house at Henderson, on the banks of the Ohio, on my way to Louisville. In passing over the Barrens a few miles beyond Hardensburgh I observed the Pigeons flying from northeast to southwest in greater numbers than I thought I had ever seen them before, and feeling an inclination to count the flocks that might pass within the reach of my eye in one hour, I dismounted, seated myself on an eminence and began to work with my pencil, making a dot for every flock that passed.

In a short time, finding the task which I had undertaken impracticable, as the birds poured in in countless multitudes, I rose and, counting the dots then put down, found that 163 had been made in twenty-one minutes. I traveled on and still met more the farther I proceeded. The air was literally filled with Pigeons; the light of noonday was obscured as by an eclipse; the dung fell in spots not unlike melting flakes of snow; and the continued buzz of wings had a tendency to lull my senses to repose. …

Before sunset I reached Louisville, distant from Hardensburgh fifty-five miles. The Pigeons were still passing in undiminished numbers and continued to do so for three days in succession. The people were all in arms. The banks of the Ohio were crowded with men and boys incessantly shooting at the pilgrims, which there flew lower as they passed the river. Multitudes were thus destroyed. For a week or more, the population fed on no other flesh than that of Pigeons, and talked of nothing but Pigeons.

This wasn’t exactly subsistence hunting as practiced by Indians and early settlers, but it appears not to have had much impact on the pigeons’ overall numbers, either.

Nor did “market hunting” — the shooting and netting of Midwestern birds for sale in eastern cities — as practiced in the early 1800s. The population was simply too large and well-established.

After mid-century, though, as the expansion of railroads made possible much larger shipments of pigeons, and promoted the logging booms that drastically shrank their habitat, the pigeons were in trouble.

Roosting in massive numbers enabled equally massive slaughters; it has been reported that hunters near Petoskey, Michigan, killed 50,000 birds a day for nearly five months at a single nesting site.

During migration, low-flying birds could be knocked out of the air with poles; nesting birds could be decimated with smoke or poisoned grain; poults, which weighed more than their parents, could be gathered from the ground in the short space between leaving the nest and learning to fly.

As late as 1871, according to Audubon magazine, there were an estimated 136 million breeding adults in an 850-square-mile portion of Wisconsin’s oak barrens, but the population was already in a rapid plunge toward extinction.

Warnings were raised and some states attempted to protect the passenger pigeon with hunting restrictions, but the laws were unpopular and difficult to enforce. At the national level, Congress voted in 1900 for a set of protections offered by Iowa’s Rep. John F. Lacey, which restricted interstate commerce in wild game and opened an era of federal protections for birds and other wildlife.

The Lacey Act was too late for the pigeon, though. Although some recent research quibbles with this date, it has long been generally agreed that the last passenger pigeon to be seen and officially identified in the wild was shot in Pike County, Ohio, in March of 1900 by a 14-year-old boy, said to have employed a BB rifle (or, more plausibly, the family shotgun) to eliminate a bird he felt had been pilfering bits of corn.

The boy who killed ‘Buttons’

The boy, Press Clay Southworth, lived into his 90s and became a subscriber to AARP’s Modern Maturity, where he read of the killing and wrote to the editor, confessing his role. (I found this account in a Google Books snippet from “A Feathered River Across the Sky,” by Joel Greenberg.)

Southworth didn’t know what kind of bird he’d blasted, he said, until his parents identified the corpse, which they then had mounted. The stuffed bird became known as Buttons after an improvisation by the taxidermist, who had run out of glass eyes.

It is tempting to see the Lacey Act and therefore the passenger pigeon’s demise as watershed moments, after which Americans’ relationship with species and their conservation was forever changed.

And it can be comforting to consider all of the protective legislation that has followed Rep. Lacey’s landmark law (which nowadays is more likely to be raised as a barrier to the unintended spread of noxious, invasive species than as a tool for controlling trade in iconic, indigenous ones).

But of course we have many contrary examples to consider as well, and at the moment my favorite is the steadfastly selfish, remarkably disingenuous refusal of the Minnesota Vikings to fit their new temple of pro football with bird-saving etched glass.

No one can say with much certainty how many birds will be knocked from the air by the new stadium’s unpatterned windows, but the impact of adding 200,000 square feet of windowpane in the middle of North America’s largest migratory flyway can’t be considered trivial, and the team’s position cannot be considered community-minded.

It is a settled matter of Minnesota and Minneapolis public policy that new construction is to take reasonable steps to mitigate destruction of migratory birds. This is so even if the project doesn’t receive the massive public subsidies going toward this one.

Yet the Vikings simply refuse to do the right thing and the Minnesota Sports Facilities Authority, which supposedly oversees the project, supports the team’s truculence even as the stated justifications for doing the wrong thing keep changing.

First the excuse was that there wasn’t room in the project’s billion-dollar budget for the extra $1 million that bird-safe glass would cost; now, having added $46 million for such upgrades as more TVs by the concession stands, we’re told that etched or “fritted” glass has always been a nonstarter because the owners prefer the aesthetics of plain glass, and anyway the windows have already been ordered, and the construction schedule can’t accommodate a change, and so on.

I don’t mean to equate the stadium’s contribution to migratory bird mortality with the extinction of the passenger pigeon.

What I do say is that the behavior of the Vikings and the MSFA reminds me a little bit of a kid with a 12-gauge shotgun, going out to blast a pigeon just because he feels like it.

It’s not a perfect analogy, as kids will do dumb, destructive, shortsighted things just because they’re kids; young Clay Southworth couldn’t grasp the import of his act until after he’d pulled the trigger. But the Vikings and their overseers know better, or ought to, and history ought not be forgiving toward their flippancy.

100 years later, have we learned from the passenger pigeon’s extinction?