Much about the water crisis in Flint, Michigan, has become a familiar national story in the last year and especially since last spring, when a task force published blistering findings about government negligence at all levels that let thousands acquire lead poisoning from their kitchen taps. 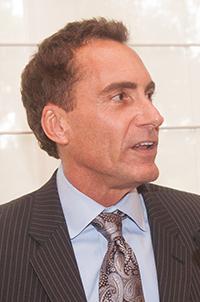 Still, there were fresh insights and implications for other cities in a talk Tuesday morning in St. Paul by Chris Kolb, a co-chair of that task force, on the many ways things that went wrong in a “toxic brew of ignorance, incompetence and arrogance.”

It was a stunner for me, at least, to hear that even after high lead levels were detected,  many experts in Michigan’s regulatory apparatus dismissed this as harmless.

Nor had I really understood how deeply dreadful were Flint’s decisions to resume treating its own water with a long-mothballed plant — and to cheap out on the anti-corrosion treatments that would have limited leaching of lead from old supply lines — during a two-year transition from Detroit water to a new system being built.

Flint had signed its first long-term contract with Detroit in 1967, Kolb explained, and kept its own plant in place only for emergency backup service.

They treated water about four times a year, about a week each time — pump water into the plant, treat it and pump it right back into the Flint River.

So you can think about, one, how much money were they putting into it, and, two, who really wants to work in a facility that only treats water four times a year?

Flint did make some updates before returning the plant to full-time if only short-term service, Kolb said, but there was one especially awful oversight involving the Department of Environmental Quality:

The Flint staff asked the DEQ directly if they needed to add phosphorus to the water, as Detroit was doing, for corrosion control and they said no, you don’t. Instead, we’re going to have you do two six-month monitoring periods and based on the results, a decision will be made whether you need treatment and, if so, what type will be utilized.

This was the critical decision that led to the poisoning of Flint residents.

It was also, he explained, a clear and direct violation of the 1991 federal requirements known as the Lead and Copper Rule, which since 1997 has required all city water systems to use whatever corrosion control is necessary to keep lead below safety standards.

Before 1993, it was possible for systems to win exemption from the requirement by showing that lead levels over two consecutive six-month periods were within safe standards. But both the Flint and Detroit failed to qualify for the exemption when it was available, and the first six-month test of Flint’s workaround system in 2014 showed high lead contamination (though residents were not told).

DEQ’s response, Kolb said, was to counsel waiting for results of the second six-month data set, and maybe even a third if the second set showed some improvement.

In the question period following his remarks, Kolb was asked if the high cost of corrosion treatment was a major factor, given the city’s well-publicized financial agonies.  He recalled that, early on, the excuse was indeed that treatment was quite costly but the task force found this was untrue.

The number that’s in my head is that maybe it was $60,000 to $100,000 a year. It was nothing when you look at the per-day cost of water treatment. For Flint’s part, they just weren’t going to do anything they weren’t told to do. And the state felt their interpretation of the Lead and Copper Rule was right.

Kolb referred frequently to his own eye-opening moments during his task force’s inquiry, so it is worth pointing out that, pre-crisis, few people in Michigan were better positioned to be unsurprised by the horrors the panel would uncover.

We’re supposed to be the eyes, the ears, the collective voice of the environmental community at the state capitol, but before Flint we focused our attention on protecting the quality of resource waters, both surface and groundwater, and then looking at effluents from wastewater treatment plans and other sources.

We totally overlooked the drinking water system. We figured it was a set science. They had the treatment down. It was a well-regulated system.

Flint changed all of that for us … and it changed my whole perspective on environmental protection.

Water-treatment professionals, he said, “will tell you treatment is both an art and science, and maybe it’s more art than science.”

You need to know everything about the water source and how it changes day by day, hour by hour, in its chemistry and how to run your plant under every changing condition.

And River water is much more difficult to treat due to its temperature changes, which are much larger than in deeply water, and also to all the things running into it: salts, organic materials. …

Although issues of race and racism have been prominent in the Flint fiasco, Kolb said in a panel discussion following his talk that the task force addressed them somewhat indirectly — in an “other voices” section — because the panel had committed itself to reaching consensus on its findings. And race remains divisive.

His co-chair, a Republican former legislative leader from a gated community in western Michigan, balked at the notion of a section in which the panel would examine race because he felt it would be “a conversation stopper.”

But he responded quite differently, Kolb said, to the notion of discussing Flint’s suffering in terms of environmental justice standards and how the Flint situation fell short.

His neighbors were saying, What’s going on in Flint? And they didn’t really want to talk about race, or income.

Environmental justice wasn’t a concept they understood, or would necessarily embrace. But they would tell him, “That’s just not fair. It’s not fair what happened to the residents. How in Michigan could we allow that to happen?”

Kolb framed his presentation as “Lessons for Improved Governance and Oversight,” and from the questions that followed in the Q&A it seemed clear that most of the audience was listening at least in part for lessons that might matter not only in Michigan but also in, say, Minnesota.

Reassurance was not forthcoming.

Can Flint happen here? That’s the question I get asked the most.

A recent USA Today investigation found that 2,000 public water systems serving 6 million people in all 50 states have high lead levels. Six hundred had Flint-like levels, over 40 parts per billion. Now the action level EPA has is 15 parts per billion, and we also know that no amount of lead is safe.

The Guardian has reported, based on the National Resource Defense Council’s work, that there are over 5,300 water systems in this country, providing drinking water to 18 million people, that are in violation of the lead-and-copper rule, and the violations are in every state.

Marc Edwards, the Virginia Tech researcher who uncovered the high lead levels in Flint, has recently said there is a new scientific consensus nationally that no water coming out of lead pipes is safe unless it is filtered.

So, the answer is yes, Flint could happen here.

Chris Kolb’s presentation was sponsored by the University of Minnesota’s Water Resource Center as part of its annual conference. His task force’s final report can be found here.