Ticks can, and sometimes do, deliver two, three, or four diseases in one bite. So resourceful are infected ticks that two feeding side by side on the same animal may pass pathogens one to the other and never infect the host. So clever is the Lyme pathogen that infected ticks are more efficient at finding prey than uninfected ticks. These ticks may not be able to fly or jump or trek more than a couple of human steps. But they have changed many lives, cost billions in medical care, and colored a walk in the woods or a child’s romp in the grass, our very relationship with nature, with angst. This is all the more disturbing when we realize, ultimately, that it is we who unleashed them.

Hers is a work of both breadth and depth, impressively documented and often elegant. It began as a string of newspaper pieces that Pfeiffer wrote for the Poughkeepsie Journal in upstate New York, where she specialized in investigations. I mention this at the outset because her topic is obviously and deservedly controversial, and I want you to know that she treats it with a traditional journalistic rigor sometimes lacking in modern nonfiction books, where the needs of narrative can dominate.

However, it is also a book that makes a political point — transparently and persistently — that the shocking and still-accelerating spread of Lyme infection, and the suffering of victims left with chronic illness and disability, have been amplified needlessly by official indifference to prudent, practical, science-based remedies. Also, by policy decisions in which self-interest, ethical lapses and conflicts of financial interest played a role.

The result, she says, is a rapidly spreading tick-borne illness “that has been minimized, underestimated and politicized to the point that doctors fear treating it aggressively with a cheap, common drug: antibiotics.” (She might have added — highly safe, easily obtainable, unlikely to be abused.)

So Pfeiffer’s discussion goes well beyond the familiar, messy disagreements over attributing this symptom or that syndrome to a long-lasting Lyme infection that can’t be proved with lab testing, or to corollary damage that some but not all experts have sourced to the Lyme spirochete, Borrelia burgdorferi, whose capability for evading antibiotics and other medical intervention is established.

Pfeiffer reduces the American medical establishment’s consensus to four “myths” that are scientifically indefensible but have withstood nearly three decades of worthy challenge: that Lyme is overdiagnosed; that tests for its presence are reliable; that the disease is hard to get; that it’s easy to treat and therefore not chronic.

In five years of writing about Lyme disease, I have found a medical landscape that is breathtakingly controversial and, in many ways, dysfunctional, one characterized less by warring sides than by parallel universes.

The side taken by the Centers for Disease Control and Prevention strenuously and dogmatically proffers a view of the disease that is straightforward and unambiguous, solidified in 2001 by two major treatment trials and precious few since. The other sees a disease complicated by poor tests, a bafflingly complex and crafty bacterium, and the influence of related tick-borne infections, like babesiosis and bartonellosis, and a variety of related B. burgdorferi species and strains that may be missed by classic tests. Often denied government grants, this side has conducted research experiments with the help of nonprofit entities, challenging the status quo.

Unlike almost any other disease in America, Lyme disease care is a closely controlled construct of one American medical group— the Infectious Diseases Society of America — and one government agency, the CDC. Doctors who have opted to treat outside the mainstream have faced the terrifying prospect and reality of censure or suspension by licensing boards, here and in other countries.

Pfeiffer’s expansion of her newspaper series into this book took her to England, France and the Netherlands; she also interviewed experts in Australia, Austria, Canada, Germany, Ireland, Sweden and other countries. Her wry conclusion:

The United States may not export much in the twenty-first century, but its made-in-America vision of Lyme disease sells well in many countries around the world. Lyme is exaggerated. Lyme can be dealt with. Lyme is no big deal.

Of course, Lyme sometimes can be no big deal: If the tick or its trace is found quickly enough. If the tick is removed correctly. If an antibiotic is available for a quick knockout punch to the spirochetes before they burrow in and build their defenses.

Pfeiffer herself has had this kind of minimalist encounter on two occasions, a fact she proactively disclosed to interview subjects lest they assume she was a long-suffering “Lyme loonie.” 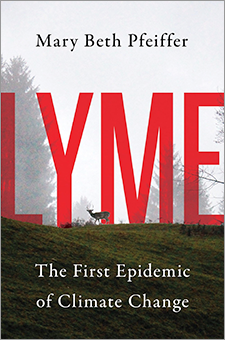 (I’ve had three risky bites that I know of for sure, all treated successfully with an immediate dose of doxycycline, although one rash covered my abdomen before subsiding; my doc keeps that prescription filled preventively, because I live in the woods and medicate for six or eight “possibles” every year.)

But Pfeiffer is also convinced by careful review of the evidence that Lyme does indeed cause serious, long-term illness in large numbers, and not only on the order of lasting muscle ache, joint pain, persistent fatigue. There is the exemplary case of Kris Kristofferson, who went through a two-year siege with pain, weakness and an Alzheimer’s-like disintegration of memory before being diagnosed and treated for a Lyme infection he might have carried for a dozen years.

Putting good numbers to these worst-case infections is difficult for a host of reasons, from underreporting to misdiagnosis to resistance in the medical establishment. Putting numbers to even the mild cases is also difficult, for the same reasons, but Pfeiffer accepts the CDC’s judgment that its official tracking catches just one case in 10 across the U.S., yielding an annual total of up to a half-million new cases. Children between 5 and 9 years old are still the most likely to be infected; their grandparents, between 60 and 64, are likeliest to need hospitalization.

The book also cites some estimates of the suffering and financial cost attributable to the disease, all subject to the same inadequacies, and even shakier though best-available figures on declining tourism and revenue in the hot zones. But for me the sharpest puncture to the notion that Lyme is no big deal is this clear characterization:

Lyme disease is distinctive as the first disease to emerge in North America, Europe, and China in the age of climate change, the first to become entrenched, widespread, and consequential to multitudes of people.

Ever the responsible journalist, Pfeiffer acknowledges that her use of “epidemic” in her title is not sanctioned by the CDC, which prefers “endemic” — then makes a case that while the official label is supported by definitions in the technical lexicon, it also understates in public understanding the scale of what’s really happening.

And, of course, she acknowledges that climate change is not the only driver in the recent explosion of Lyme, a disease that has come and gone in earlier times, too. The stage for the modern outbreak was set by decades of deforestation and development, which disrupted relationships among ticks, hosts and natural controls.

I can recall writing a piece for the Strib back in 2000 about research suggesting that Lyme might be the first big disease outbreak driven by habitat destruction, and sure enough, Pfeiffer has that study, too:

In 2000, a student at the University of Michigan in Ann Arbor named Brian Allan studied tick populations in different sized patches of forest, from about two to eighteen acres, in suburban upstate New York. The results were an indictment of the toll of middle-class development on human health. Taking a census of ticks, Allan found remarkable differences depending on woodlot size. Compared to bigger parcels, the smallest patches had three times the number of nymph ticks and seven times the number infected with the Lyme pathogen. Moreover, the share of infected ticks in the smallest patches was frighteningly high— seven in ten on average— which was the highest recorded to that point. The reason for this suburban curse goes back to what these islands of nature can support and what they cannot. Mice and other small mammals abound. Predators that might eat them do not. And this arrangement works very well for ticks.

But so, of course, does a shift to generally warmer and wetter conditions worldwide (at least until it gets too hot for ticks in some places, a boundary science has yet to define). Study after study shows that altitudes once recorded as the upper limit for Ixodes species in this or that mountain range are now out of date by thousands of feet, meaning steep terrain is no longer a barrier for ticks hitchhiking on mammals or birds to colonize new territory.

That’s really bad news, because despite the immense difficulty of controlling ticks, it’s still the easier approach to limiting Lyme than dealing directly with the things they carry:

Borrelia burgdorferi is a clever, adaptable bug. It has a hugely complex genetic profile, with more independently replicating structures, called plasmids, than any other bacterium. It doesn’t need iron, unlike most other bacteria, removing one option for our immune systems to starve it into submission. It grows slowly, confounding drugs that work on rapidly dividing cells. It hides in places that diagnostic tests do not reach. This tiny spiral-shaped organism is actually a boon to ticks. Those infected are more likely to find a blood meal, and ominously, may even cope better in dryer, hotter conditions, than those that do not carry the Lyme pathogen.

As Lyme goes global, a new book sees it as ‘first epidemic of climate change’