Just how bad is the western wildfire season in North America this year?

It depends a bit on where you look and what you measure, but a fair summary would be: pretty damned bad.

In California, the huge blaze known as the Mendocino Complex covered more than  364,000 acres when I looked on Thursday morning; that would be 569 square miles. (For scale, Hennepin County’s land area is 554 square miles; counting surface water lifts the total size to 607 square miles). Some 265 structures had been destroyed and more than a thousand more were at risk.

The Ranch Fire, larger of the complex’s two component blazes, became the largest in California history on Sunday morning, when it stood at 282,479 acres; it has claimed at least one life, a battalion chief from the city fire department in Draper City, Utah, who had come to help out and was struck by a falling tree.

But in the Golden State’s steadily intensifying pattern of wildfire, worst-ever records don’t stand for long; the previous was set less than a year ago, when the Thomas Fire hit Santa Barbara and Ventura counties. That was in December, a month that used to fall outside fire season.

And Cal Fire rarely has just one huge fire to contain; the Carr Fire, which has been burning for three weeks near Mount Shasta, has taken more than 1,000 homes and 500 other structures, along with the lives of three firefighters and three residents.

In all, the Los Angeles Times counts 11 dead in a season shaped by extreme heat and prolonged drought, but also by longer-term trends: “Of the five largest wildfires in state history, four have occurred since 2012.”

In Texas, meanwhile, nearly 900 wildfires have been tallied so far this year, which the Austin American-Statesman says puts the state on pace for its worst fire year since 2011.

They’re having a bad year in British Columbia, too, where CBC reported last week that the 1,500 wildfires counted so far are already well above the average full-year count of 1,100; the area burned was 188,000 hectares (723 square miles), also above the midsummer average of 158,000. 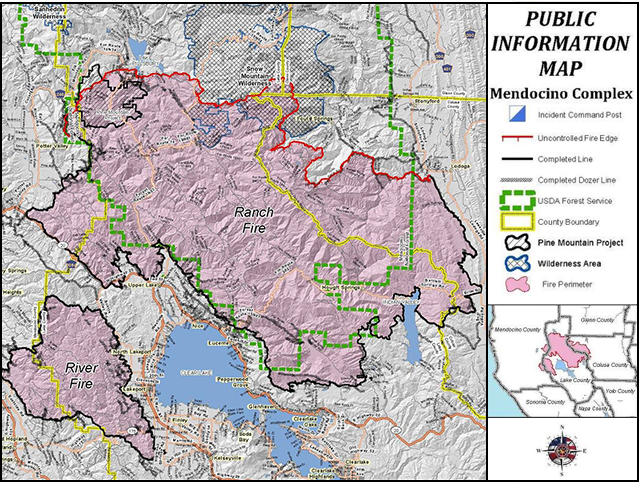 On Wednesday, as both the number and intensity of fires continued to grow, the provincial government declared a state of emergency and the Ottawa government sent federal troops to join the fire lines. Other provinces have also sent personnel, as have Mexico and New Zealand; some 4,000 people are in the fight now.

For additional perspective on the trend we’re seeing, consider these summary points from Christopher Ingraham, data-driven contributor to the Washington Post’s Wonkblog, in a piece headlined, “Wildfires have gotten bigger in recent years, and the trend is likely to continue”:

Through Aug. 13, about 5.7 million acres have gone up in flames, an area larger than New Jersey. The amount burned so far this year has already surpassed the total for 2016. It’s all consistent with a trend going back to at least the early 1980s: The amount of acreage consumed by fire is growing. Fires are getting bigger, and fire seasons are lasting longer. And as the planet gets hotter and parts of it get drier, it’s likely that these trends will continue for the foreseeable future.

The National Interagency Fire Center has data on the total number of wildfires and acres burned for each year going back to 1926. But modern data collection, with figures that can be compared year over year, began only in 1983. That year, 18,000 fires burned a little more than 1 million acres. The overall trend since that year has been a steady increase despite significant year-over-year variation.

In 1990, for instance, 4.6 million acres burned. In 2000, it was 7.4 million. The year 2015 saw a modern-day record: 10.1 million acres burned, an area larger than the state of Maryland. Last year, the most expensive fire season on record, was just as bad, and year-to-date figures suggest that 2018 will be in the same ballpark.

Because wildland fire statistics can be, um, volatile from year to year, Ingraham’s first comparison, though factual, is just a little off-base.

This is why NIFC favors comparisons against a rolling average of the previous 10 years, which now stands at 4.69 million acres — another measure the 2018 fire season has already surpassed.

It’s also true that our national history has some Godzilla-size fires in it, still capable of dwarfing the Mendocino Complex and other recent standouts. Newsweek put together an interesting take on seven world-class fires of bygone times in the U.S., Canada and Australia, including the Great Fire of 1910 across North Dakota, Montana and Idaho — 3 million acres in 36 hours. (From our region, Peshtigo 1871 is on the list, Hinckley 1894 is not.)

Needless to say, air-quality problems associated with the fires are extreme right now across large parts of the West and especially the Northwest, and smoke is regularly detected hundreds of miles downwind (even in New York and New England, though at sufficiently lower concentrations and higher altitudes that health impacts are likely to be trivial).

However, in looking into that aspect I ran across an interesting article by Megan Molteni for Wired, about downwind risk factors; she reports that new research using satellite photography of “smoke shock” suggests it may cause 1,000 deaths a year, mostly among the elderly and often in quite distant areas, ours especially:

“Minnesota actually gets just about the most smoke days of any state in the U.S., you just don’t notice it,” says Nolan Miller, an economist at the University of Illinois at Urbana-Champaign who studies the deadly health impacts of temperature and weather extremes on the elderly….

Historically, it’s been difficult for researchers to conclusively connect wildfire smoke with specific health outcomes because of patchy data—fires tend to occur in rural areas that often lack air pollution monitoring coverage and where few people live. But satellites are beginning to change that.

Using smoke plume image data from the National Oceanic and Atmospheric Administration, Miller’s group derived a daily smoke exposure status for every zip code in the U.S. for every day between August 2005 and December 2013. By linking this geographic smoke score to air pollution monitoring data and deidentified billing records for every Medicare beneficiary over the same time period, they were able to construct an eight-year, day-by-day look at how the country’s elderly fared during smoke shocks—sometimes down to a few square miles.

A new normal? Alas, no

As usual, news coverage of this fire season has revived the critique that too few news outlets, reporters and individual articles are pointing out the important and ever-clarifying links between climate change and heat waves, drought and wildfire. For example, there was the Media Matters survey of a few weeks ago, pointing out that

Over a two-week period from late June to early July, ABC, CBS, and NBC aired a combined 127 segments or weathercasts that discussed the heat wave, but only one segment, on CBS This Morning, mentioned climate change.

Well, they’re not tracking MinnPost, I guess. And while I sometimes sense a telepathic message from readers suggesting I write about climate a little less and other things a little more, I’m going to close by noting Ari Shapiro’s interview with LeRoy Westerling for National Public Radio.

Westerling’s a University of California professor at the Merced campus, who researches climate and wildfire patterns and lives uncomfortably close to the Ferguson fire, which closed most of Yosemite National Park to tourists for a few weeks. Over the noise of an air cleaner in his home, extracting a breathable stream from an ambient atmosphere so smoky he couldn’t see into his backyard, Westerling was asked his opinion on Gov. Jerry Brown’s declaration that Californians should regard the current fire regime as a “new normal.”

He gently begged to differ, but not because he thought Brown was exaggerating:

In climate science, you know, a normal is taking the recent experience — let’s say the average of the last few decades —  and using that as a guide for what the risks are that you face. And the problem is that fire is responding to climate change, and climate change is something that is going to accelerate. So there will never be a new normal.

As for Donald Trump’s incoherent tweet last week, suggesting that water from California’s vast storage and distribution system be used to fight fire “instead of foolishly being diverted into the Pacific Ocean,” Westerling was both gracious about the president’s presumed intent, but firm about the realities:

I assumed he meant that we were keeping water in the rivers for the fish to survive there and to prevent saltwater intrusion in farmland in the delta and that somehow if we had that water available for firefighting, that we wouldn’t have this problem.

But even if you built a massive statewide sprinkler system and drained all of our natural water bodies to operate it, it wouldn’t keep up with evaporation from warmer temperatures from climate change.