Not long after they began dating, Emily Knudsen and Bill Bartz decided they wanted to create some kind of venture at the small farm that Bartz owned near Waseca. They weren’t going to raise crops on 55 acres, though, and they weren’t interested in simply leasing the bucolic site for special events.

Knudsen had grown up in Red Wing, not far from a Stockholm, Wisconsin, farm that baked pizzas and sold them to customers who showed up as much for the countryside vistas as for the food. “I just remember thinking, ‘This would be great to own one of these,’” she said. “What a great concept!”

Knudsen invited Bartz to visit that Wisconsin farm, A to Z Produce and Bakery, and have a look for himself. His response? “It took about 10 minutes to decide that we wanted to do this,” he said.

Five years ago, after renovating a horse barn, adding a kitchen to it, clearing a pasture in back and building a music stage, the couple opened Pleasant Grove Pizza Farm, their version of the Wisconsin operation that had first animated Knudsen (and which she calls “the mother ship”). They have since added a second wood-fired brick oven.

Pizza nights – twice a week from June through September, once a week in May and October – now form the backbone of their business, which also includes events like corporate meetings, groom’s dinners and the occasional wedding. They make their own crust and grow their own ingredients for a slate of pizzas that cost about $25.

On a late afternoon in July, Knudsen made pizzas in the kitchen and also took orders in the barn. The menu, sketched in chalk on a large blackboard, included Sweet Georgia Pie (a pizza topped with honey); the Pig and Pork; Lola (which is meat-free); and The Minnesota Mess, a loaded pizza with red sauce, sausage, mushrooms, green peppers, onions, black olives and green olives.

While Knudsen and an employee made pizzas, Bartz helped to man the rounded ovens in an adjoining room.

Bartz, who grew up about six miles from here, said agriculture always felt like a calling, though he knew that growing row crops wasn’t for him. Growing their own ingredients, making unique pizzas, sharing the outdoor experience with their guests – all of that has been a good fit for the couple. “We’re always so excited in the spring to wash the barn and open it up and get to work implementing new ideas,” he said.

Another kind of agri-tourism

Such farms seem to be a rarity, though there are also several in Wisconsin, and a few others dotting the Midwest.

That’s made for some dice-rolling when it comes to making decisions about what to offer or how to accommodate their guests. “That’s not many to compare ourselves with in terms of how to run this business,” Bartz said.

Waseca, a city of 9,000 residents about 80 miles south of Minneapolis, seems like a natural fit for such “agri-tourism”; nearby Owatonna is the home of the Southern Minnesota Initiative Foundation, an organization that has long championed diversity in the region’s agricultural economy. Last year, the foundation helped to secure loans for several food and drink establishments in the region, including Pleasant Grove Pizza Farm; Trio Coffee, Wine & Ale House, a boutique wine and craft-beer business in Waseca; and Evan’s Eatery, a food truck based out of New Richland.

Knudsen and Bartz used the loan to, among other things, buy a six-burner range for the kitchen and to expand the oven room – upgrades that reflect their business’ growth. Knudsen estimates that they have been selling 125 pizzas each week this summer, serving hundreds of customers who bring their own utensils and beverages, eat at wooden tables or on blankets, stroll along the farm’s trails and listen to music.

In a sign of solidarity in the emerging agri-tourism industry, Pleasant Grove Pizza Farm supports another nearby venture: Half Pint Brewing Company, a new craft brewery located just a few miles away, also tucked onto a farm site in this corner of Minnesota. Pleasant Grove delivers pizza for the brew pub’s patrons.

Knudsen and Bartz do little advertising for their business, relying instead on social media and word of mouth to spread the message. 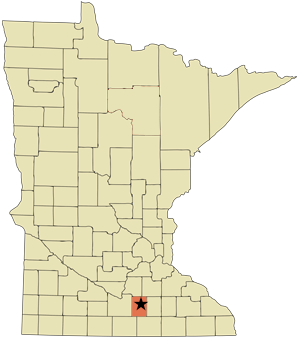 Indeed, Amy Gaides and Rachel Scholz learned about Pleasant Grove on Instagram and drove an hour and 20 minutes from Woodbury to try out the pizza farm. The roommates found a shady spot near the horse barn, spread a blanket on the ground and played cribbage on a board cut into the shape of Minnesota. They brought their own grapes, a Bundt cake and Pringles.

“I love the open space and the green grass,” said Scholz, a nurse. “It’s super inviting and not too crowded.”

Gaides, a middle-school teacher, said, “It’s peaceful, tranquil. I feel like I’m one with nature. And we actually like being human with each other” – gesturing toward her friend – “rather than being tied to technology all day.”

She looked around and added, with a laugh: “I think I want to have my wedding here!”

They admired the farm’s resident donkey, Dorothy, and goat, Pie Pie, who lingered just beyond a fence. Finally, their food arrived: a Sweet Georgia Pie with a side of pizza fries – a fancy name for cheese pizza strips presented with a side of red sauce.

Pleasant Grove Pizza Farm is nestled into a grove of trees in Blooming Grove Township, about 10 miles north of Waseca. The farm emerges suddenly off of a gravel road, its long driveway running past a red wooden sign and opening onto the sprawling complex.

After he bought the farm in 2006, Bartz built a house next to the barn that now houses the kitchen. A spacious green lawn spreads beyond the buildings, leading to trails that wind through the meadow. Knudsen grows her pizza ingredients in an adjacent garden. Wooden fence posts, benches and sheds add rustic charm to the site.

Bands take the stage on most pizza nights – local acts with names like The Watermelon Slush, Ditch Creek Dixies and Los Tequileros.

The pizza season can be intense. Knudsen and Bartz take Mondays off, if they can, and do much of the labor on pizza nights. Asked about the challenges of such an operation, Bartz said “the list is long,” including the government red tape that eating establishments must navigate.

On the late afternoon I visited, a half-dozen people ate at wooden tables in the shade of the old horse barn. Knudsen took a break from making pizzas to visit with the group, wanting to know what they thought of the food. In the barn, four elderly women studied the menu, asking for particulars on the ingredients.

Knudsen once worked as a banquet server, so the pizza farm, she said, “combines my love of cooking and hosting.” She is also a self-proclaimed “food experimenter” who dabbles in pastas, breads and soups – a tinkering that can lead to some imaginative pizzas, such as the one with oyster mushrooms, five cheeses and a milk glaze that she and Bartz and their employees sampled in the kitchen.

It was hot and customers were beginning to arrive. It would be a busy night, but she was in her element.

“I love to create food with a lot of flavor and I love working in my garden or on my hobby farm,” she said. She looked around, smiled and said, “and I just love the country.”