China is tired of putting up with our garbage.

China is a top buyer of recyclables from other countries, but it announced this year that it would be drastically reducing the amount of recycling it accepts from places like the United States, largely due to the high contamination of recyclables with plain old trash.

That reduction is a big deal: Last year, China imported about two-thirds of the United States’ waste paper exports and about a third of its plastic exports.

In parts of the U.S. and other countries, the purchasing reduction has already resulted in pile-ups of recyclables, as companies that sort and sell recycling can’t find buyers for the material.

While things in Minnesota — far from coastal ports and home to companies that buy and use recycled plastic and paper — don’t seem to be as dire as in many places, companies here that collect and sell recycling are starting to feel the effects of the Chinese policy, and some involved in the process say it could provide an opportunity to develop more strategies to reuse recycling at home.

There’s a reason China doesn’t want as much of the U.S.’s recyclables as it used to.

In terms of quantity, Americans have gotten much better at recycling over time. In 1960, just 6 percent of municipal solid waste was recycled, compared to more than a third today, according to the U.S. Environmental Protection Agency.

In recent years, many cities, including Minneapolis and St. Paul, and recycling companies have moved to make it easier for people to recycle — switching from bins that require consumers to separate out papers from plastics and cans to single-stream recycling in carts with everything mixed together.

That convenience has come at a cost.

“Both single-stream and (recycling) carts have increased contamination,” said Kate Davenport, the co-president of Eureka Recycling, a nonprofit recycler in Northeast Minneapolis, which handles recycling for Minneapolis, St. Paul and other metro area cities.

The issue is partly cross-contamination caused by the mixing of different kinds of recyclable materials — though technology adopted by recyclers has enabled a larger amount of recyclables to be mechanically sorted. Single-sort policies have increased the amount of “wishcycling” — a term for when consumers try to recycle something that’s not recyclable because they think or hope it is. At the same time, the switch from open bins to carts with lids made it harder for workers who pick up recycling to see non-recyclable material, which means more of it ends up heading to recycling facilities.

“The amount of material that comes through our facility that we can’t recycle because (say), it’s a garden hose — when we were dual-stream, that amount of material was less than 1 percent, now we’re more at 6 to 7 percent,” Davenport said.

All that influx on non-recyclable material has meant the contamination rate, or the amount of material in a bale of, for example, plastic or paper that isn’t plastic or paper, has increased over the years. 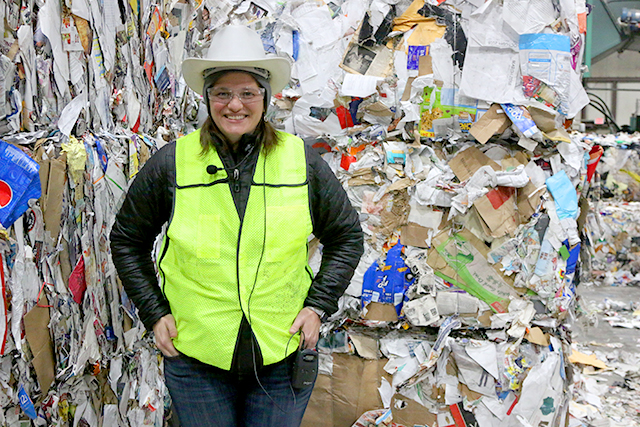 China is fed up with all the contaminated recycling. Its officials effectively told the World Trade Organization last summer that it was tired of being the world’s garbage collector. It announced it would stop accepting certain types of recyclable waste from other countries altogether, and impose strict limits on contamination levels for others.

“The quality of recyclables has really deteriorated over the last decade,” said Lynn Hoffman, co-president of Eureka. “This is China saying we want your recyclables, we just don’t want your trash, which is pretty hard to argue with.”

It’s not the first time China has imposed quality controls on recycling.

In 2013, the country rolled out a 10-month “Green Fence” policy, which forced recyclers abroad to clean up their acts if they wanted to ship their products to China.

But now, as China works to develop its own recycling pipeline, it’s imposed new limits:  for many products is a contamination rate of less than 0.5 percent, a level recyclers say is very difficult to achieve.

Eureka sells most of its recyclables to companies in the region — about 80 percent to companies in Minnesota, but that doesn’t mean it won’t be affected by price fluctuations as domestic markets are flooded by recyclables from other states that would have otherwise gone to China.

“Prices have been impacted because when you can’t sell internationally, the plastic market is flooded,” Hoffman said. Prices for cardboard and mixed paper have also been affected.

At Eureka’s facility, in an industrial area north of East Hennepin Avenue, about 350 tons of recycling are collected each day. The materials are piled high in the facility before being loaded onto conveyor belts to undergo the sorting process, which separates out paper, glass, plastic, metal, and trash, using machines, yes, but also people.

Once sorted, its recyclables go to companies, on trucks and trains, to facilities that use them.

In general, the Midwest is more insulated from shifts in the global market for recyclables because much of the reuse of papers and plastics for the region is done within the region.

“We’re lucky in that we’re in the Midwest, and we have paper mills here and we have plastic recyclers here … but on the West Coast, in many ways, the way the global economy works, it’s been cheaper to ship paper to China in a container that brought an iPhone over and is going back to China,” Davenport said.

That doesn’t mean the effects of the new Chinese policy aren’t starting to be felt.

Andrew Smith, business development manager at Vida Recycling Corporation, located in the Twin Cities, which handles paper, plastic and electronic waste, said he’s noticing it with mixed paper, bales of which are piling up on the floor of his company’s facility.

In the wake of China’s announcement of its new policies, U.S. recyclers have flooded the domestic market, Smith said.

“A lot of mills are getting really picky because China was taking (tons) of material and then they went to zero, so of course that flooded domestic markets. Materials come into these domestic mills left and right, so they get to pick and choose the best of the best and leave the other guys with no options.”

“I have over 300 tons currently on my floor of various types of mixed paper that nobody’s excited to help me move, and also export options are not available,” he said. “We’re hoping that it will open up, but a lot of these mills tell us we’re full — they already have hundreds of trailers.”

Minnesota has made a concerted eff0rt to develop markets for its recycling, said Wayne Gjerde, recycling market development coordinator with the Minnesota Pollution Control Agency. Gjerde hopes a continuation of those efforts help Minnesota weather difficulties brought on by China’s policy change.

He said the MPCA is in talks with a Minnesota and a Canadian company about building out the infrastructure to help process more plastics.

Not only does it make sense environmentally to process recyclables close to home, Gjerde said, and thereby avoid the cost of transporting them across the country — or the world, but it’s also an economic development strategy. Minnesota has 18,000 manufacturing jobs tied to recycled materials, he said, in companies that make everything from furniture to siding and textile materials out of reused goods.

“I don’t think anybody’s panicking at the moment in regards to the markets, but certainly there’s a lot of concern out there,” he said, adding that even if the material had to be stored for a while, the state would work to make sure the material gets to markets.

His advice to Minnesotans?

“Put your stuff in the proper bin and don’t throw recyclable material away.”

China is taking less of the U.S.’s recyclables. That might be an opportunity for Minnesota