There are a lot of reasons the merger of Hamline University and William Mitchell College of Law makes sense. But it’s also clear that they had to do this. That’s why the news was released on a Friday with a minimal amount of hurrahs. It’s a downsizing, not an occasion to throw confetti.

Yet it’s also not an occasion for throwing barbs. In many ways, it’s a smart and necessary move. It was always a bit fanciful to think Minnesota could support four law schools; it’s a mid-sized market with mid-sized legal needs. To compare, check out the numbers below, which shows how many law students we have compared to other states our size:

Minnesota is conspicuous by its abundance of law students, and right-sizing has arrived. The boom times are over, and the 2008 recession won. Last year Hamline had just 90 first-year students, making it one of only 25 law schools in the country with fewer than 100. Hamline fought back as best it could. It zealously marketed, particularly its weekend JD track, which was apparent to anyone who walked through the downtown Minneapolis skyway system. But the enrollment numbers at both Hamline and William Mitchell were still down, in no small part thanks to each school’s tuition (holding steady at around $30,000) and job reports from the market (holding steady at fairly abysmal).

And so Mitchell|Hamline School of Law was born out of necessity. It may take a while before it looks good on a sweatshirt.

The worst kept secret in the Twin Cities legal community

To those in the know, Friday’s news wasn’t a shocker, and not something to cry about. “Rumors had been going around for a while,” says Crystal Funari, a 2008 William Mitchell grad who works as a compliance officer at UnitedHealth Group. “I’m happy to see it happen because something had to be done. Hopefully the new institution will decrease the size of their classes, therefore putting less attorneys out there and putting less attorneys in debt.”

The schools fit better as soul mates than sparring partners, anyway. They’ve had years of competing with each other for most favored nation status after the University of Minnesota's law school, which boasts the highest ranking in the all-important-but-highly-resented national rankings. For 2014, U.S. News & World Report has the U of M Law School tied for 20th nationally (6th best among public universities), with Hamline at 121, St. Thomas at 129, and William Mitchell at 135.

William Mitchell and Hamline have historically marketed themselves as offering a skills-based, practical education with strengths in specific niches — Hamline in mediation and health law programs, William Mitchell clinical education. In a lot of ways, they offered the same deal to students. They were both scrappy St. Paul institutions pledging a real-world alternative to the ivory-tower stiffs over in Minneapolis.

It worked until it didn’t. 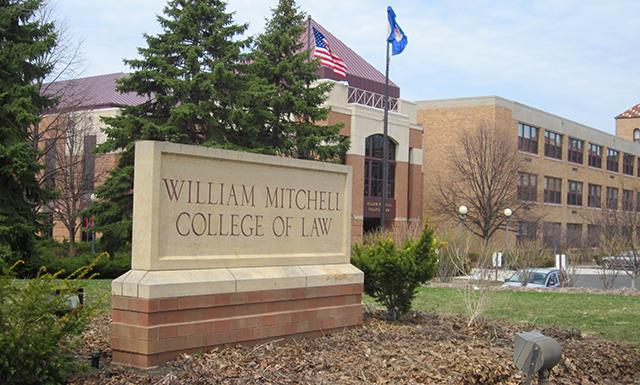 Jean Holloway is the dean of Hamline Law School as currently configured, and is candid about the extended courtship between the two institutions, which will result in the Pipers relocating to Mitchell’s Summit Avenue address.

“We talked a number of times with William Mitchell over the last 15 years about a possible combination, with the most recent talks starting in late summer. Both parties realized we needed to do things differently,” she says.

Holloway’s predecessor, Don Lewis, who today is in practice at Nilan Johnson Lewis, echoes Holloway’s sentiment, while noting that such a merger is close to unprecedented in American jurisprudence.

“There have been only a couple other mergers of this magnitude,” said Lewis. “Michigan State and Detroit College of Law did one many years back, and about five years ago so did the University of New Hampshire and the Franklin Pierce Law Center. Those are the only ones I know of.”

Those are the only ones so far, though there are rumors in the legal world about Vermont Law School and the University of Vermont pulling the trigger.

Lewis likes the deal in part because it ends the competition between the two schools and creates a formidable new force in the community. “It will become the leading private law school in the Midwest, and that’s positive from a community-benefit standpoint,” he said.

Law-student debt has been the elephant in the room for several years now. The recession took a toll on attorney employment and compensation, as did advancements in technology, which have greatly diminished document review gigs. “A lot of my friends are putting off life events because of the debt,” said Funari, the William Mitchell grad. “They can’t get a mortgage because their loan is their mortgage.”

Holloway says both schools have long had a strong commitment to addressing affordability issues, which can be seen in their commitments to providing part-time education programs.

Lewis, who is no longer dean and not bound to talking points, gives a more nuanced answer: “When you start having a decline in enrollment, you have to do two things: One is offer a lot of discounted tuition and a lot of scholarships, which decreases the revenue that law schools get; you also have to market so people go to your school and not the competition. At the same time, there’s little you can do to your cost structure because you have tenured faculty. It’s hard to bring things into alignment.”

And if you’re giving a lot of scholarships to the most attractive students — those with high test scores and the best grades – you have to make that up somewhere in the budget. “What you’ve been seeing over the last couple years is law schools have been admitting more students who are getting a lot of loans, and they’re probably a lot of the folks who are going to have a harder time getting a job,” Lewis said. “So I’m hoping this combination will result in a reduction in these inefficiencies. I’d like to see small enrollments and less pressure to discount tuition.”

Roy S. Ginsburg, a lawyer consultant, thinks the move will be a net positive for the community. “The predominant number of graduates from Hamline and William Mitchell want to stay in the area, if they can only find jobs. I think this will help calibrate things,” he said.

As far as what to expect from those grads, it’s perhaps best to leave it to a judge to judge. “This is a very positive move,” says the Hon. Lorie Gildea, chief justice of the Minnesota Supreme Court. “The strengths of the two schools are a good fit with each other, with complementary programs that will serve the legal community well. This is a response to the call for more innovation in legal education.”

Why William Mitchell and Hamline Law had to merge