All three candidates endorsed by the city DFL Party and the St. Paul Federation of Teachers — along with a number of other group and individual endorsements — won a seat on the St. Paul district’s school board.

While a school board candidate’s party affiliation or endorsement doesn’t appear on the official ballot, the winning trio — Marny Xiong, John Brodrick and Jeannie Foster — had run some of the most well-funded, well-coordinated campaigns that were supported by both key endorsers.

Xiong, 28, a newcomer, came in at the top of the pack with nearly a third of all votes, totaling more than 20,000. (She’ll be filling the seat vacated by current board member Chue Vue, who decided not to run for re-election.) Xiong grew up learning to navigate the school system as a first-generation daughter of two Hmong immigrants who fled Laos after the Vietnam War. She graduated from Arlington High School and went on to acquire a bachelor’s degree from the University of Minnesota-Duluth, with a major in political science. She’s currently employed by the Minneapolis Public Schools district, where she manages the operations and finance of a school building.

Foster, 44, an incumbent closing in on her first year of service — after winning in a special election last fall to fill a seat vacated by a board member who resigned — came in second with nearly 25 percent of the votes, totaling more than 16,000. She brings the experience of having raised two children as a young, single mother who’s lived in St. Paul her entire life. The early childhood educator is a graduate of the district who holds a master’s in education from Concordia University in St. Paul.

After some initial indecision over entering the race to serve a fifth term, Brodrick, 73, secured just over 21 percent of the votes, totaling more than 14,000. He’s also a product of the district, who’s stayed involved over the years as a parent, a teacher and a school board member.

From there, Andrea Touhey, an education consultant and former teacher, secured 11 percent of the votes, with Greg Copeland and Luke Bellville each securing a  smaller percentage of the votes.

The fact that the party- and union-endorsed candidates surged ahead of their competitors yesterday evening isn’t much of a surprise. The city is a DFL stronghold with an incredibly active and politically savvy teachers union. 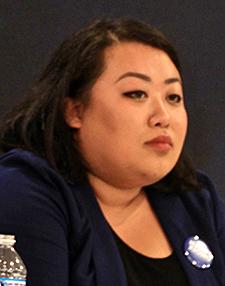 In 2015, the union backed a much louder campaign run by the Caucus for Change movement, which advocated for a new board majority. The beneficiaries of that effort — Chair Jon Schumacher, along with board members Zuki Ellis, Mary Vanderwert and Steve Marchese — essentially ran on a platform to oust then-superintendent Valeria Silva, who had come under fire in recent months as incidents of student-on-teacher assault made headlines in the news and parents grew frustrated over recent changes such as the mainstreaming of special education students, which some say happened without enough added classroom supports.

While unity on a school board can be a positive thing, in terms of keeping board dysfunction at bay, it also raises some important questions. Namely, how much — if at all — do endorsed candidates feel beholden to the union and its agenda? And how do they balance their ties with the union with their responsibilities to the district, along with the students and families it serves, during contract negotiations?

Entering teacher negotiations this fall, the board has already pushed back some on the union’s demands, asking for more flexibility when it comes to things like caps on classroom sizes. And the board has made it clear that the district is only capable of funding a fraction of the union’s current proposal, given current budget deficits, along with the $23.3 million deficit projected for next year.