After struggling to decide on a single nominee to fill the vacant seat on the University of Minnesota’s Board of Regents, members of the Minnesota House and Senate higher education committees ended up referring two candidates to their colleagues earlier this week: Brooks Edwards, a cardiologist and professor at the Mayo Medical School, and Mary Davenport, current interim president of the Rochester Community and Technical College.

But when members of the full Legislature packed into the House chamber Thursday to cast their votes, a third contender ended up winning a majority of the votes: Randy Simonson.

A veterinarian and businessman, Simonson had narrowly lost his standing as a finalist on Monday after being eliminated during the third round of roll-call voting. But at the start of Thursday’s joint meeting, Rep. Drew Christensen, R-Savage, the vice-chair of the House higher education and career readiness policy and finance committee, put Simonson back in the running.

“I think people wanted the opportunity to vote for Simonson. I think people see him as kind of a reformer and someone who’ll provide good oversight on the University of Minnesota Board of Regents,” Christensen said in an interview. “And I think there was a perception that the other two candidates didn’t offer as much of a reform message.”

As each members cast their vote, Simonson and Davenport quickly pulled ahead of Edwards. And once it became clear that Simonson was the GOP favorite, those who had initially voted for Edwards began changing their votes — a move that wrapped the entire affair up rather quickly.

“They kind of saw the handwriting on the wall, so they felt, perhaps, their vote would be better suited behind a different candidate,” said Rep. Bud Nornes, R-Fergus Falls, who chairs the House higher education and career readiness policy and finance committee. “I think — not all, but a number of them — wanted to switch it, at that point, to the candidate that needed more votes, which was Davenport.”

Simonson eventually got 104 votes. He’ll fill the Regent seat for the First Congressional District, recently vacated by Patricia Simmons, who unexpectedly announced her resignation from the board in March. Simonson will serve out the rest of Simmons’ term, which expires in 2021.

The U’s Board of Regents is a 12-member body that governs the system and its five campuses across the state. Regents are unpaid and serve staggered six-year terms, representing each of the eight congressional districts, plus four at-large seats.

Nornes says that out of all five candidates initially considered, Simonson was “probably the most familiar” to Legislators because he had stepped forward to serve as a regent in two prior searches. In the end, he thinks that Simonson’s strong connections to the University — along with his ag and business background — gave him a competitive edge.

“[Those are] all elements we thought were really important and perhaps lacking right now at the University,” Nornes said. “So it’s a way we felt, as the members who voted for him, that he would strengthen the board.”

Reached by phone for an interview shortly after being elected, Simonson, 71, says he was livestreaming the meeting from his office in Worthington. Once elected, he headed home to pack an overnight bag so he could make it to his first Board of Regents meeting later that evening.

His interest in the position stems from his “long-standing relationship with the University,” he said. It’s where he earned his doctorate degree in Veterinary Microbiology. From there, he went straight into the animal health industry. But he made a point to stay connected with the University over the years in a variety of ways: by doing research projects, sponsoring internships, serving as an adjunct faculty member, serving on department committees, establishing a fellowship in honor of one of his professors, supporting his own children who attended the U, and even hiring alumni to work for him. 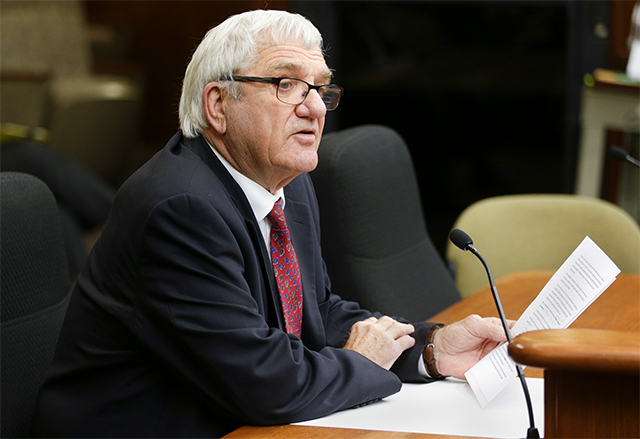 He’s currently working as CEO of Cambridge Technologies, a company he describes as being involved in vaccines and diagnostic services for veterinarians in the livestock industry. He’s also in the process of growing a third animal health company with his business partners. They sold the first two to multinational companies based in Minnesota. In addition, he says he’s involved in a lot of volunteer work — primarily with the residential recovery house, Project Morning Star, that he and his wife started in Worthington.

He’s lived in Worthington for about 30 years, he said. He and his wife Susan have three children and two grandchildren.

As a regent, Simonson says he’ll take a particular interest in a number of issues, including student debt at both the graduate and undergraduate levels, and ways the University can further support economic development in the state.

The role he plays in shaping the University’s budget in the years to come, however, may very well most define his tenure as a regent. During the joint higher education committee meeting on Monday, he offered an idea that he admitted was controversial: “I’ve always wondered if we need to look closer at having these five campuses,” he said. “Do we need that in this electronic age. If we want to look at costs … do we need all five campuses.”

This comment was a sticking point for some Legislators who didn’t vote for him. For instance, in a press release sent out late yesterday afternoon, Rep. Jennifer Schultz, DFL-Duluth, said she was “left troubled by Mr. Simonson’s suggestions that campuses may need to close, and that the U should shy away from important, lifesaving research.”

Schultz also raised concerns over the gender imbalance on the Board of Regents that Sen. Jim Abeler, R-Anoka, had initially raised during Monday’s meeting. Currently, there are only two women on the Board.

Asked to address his earlier comments about reassessing the need to operate all five campuses, Simonson said he’s more interested in taking a harder look at all of the expenses and revenue streams at each campus before advocating for any drastic measures.