When John Landgaard became superintendent of Worthington Public Schools 15 years ago, students of color made about 38 percent of the southwestern Minnesota district’s student population. Not anymore. Today, that number is 67 percent. In the 2007-08 school year, Worthington became the first district in Greater Minnesota — aside from a handful of districts located near American Indian reservations — to become majority-minority.

“I think our diverse population will stay between 70 to 80 percent,” said Landgaard, “but you just never know. It depends a bit on how your community grows, what businesses come in, and the employment opportunities for citizens.”

Perhaps the most striking thing about the state’s increasingly diverse districts, however, isn’t just the number but how spread out they are. Twenty years ago, the state’s majority-minority districts were exactly where you might expect them to be: In Minneapolis, St. Paul and near American Indian reservations. Now, though, they’re also located in Twin Cities suburbs, and in places like St. Cloud, Willmar and Faribault — cities in corners of the state that have growing populations of immigrants and refugees from Latin America, Africa and Asia.

And while some of the challenges facing these districts are similar, no two majority-minority school systems in Minnesota have the same story: Some suburban districts more closely reflect the population of the cities they serve, while others represent the vanguard of their changing communities. In some districts, classrooms may look like the United Nations, with dozens of languages spoken, while others are primarily white and black, or white and Latino.

In Worthington, a local meatpacking plant has long been a major draw for many immigrant families looking for work. The diversity of the workforce is reflected in its schools, where Latino students now make up 49 percent of the student body.

As the district adapted to serving an increasingly diverse student body, Landgaard says, staffing needed to evolve. With nearly a third of students qualifying for English Learner services, the district now employs 30 English language teachers as well as three full-time Spanish interpreters and a number of part-time translators. It also utilizes parent liaisons, who represent various populations in the school community.

Right now, Landgaard says, the biggest struggle is trying to encourage immigrant families to become more engaged in the community and take up leadership roles. For instance, over the last 10 years, a handful of candidates of color ran for seats on the school board. But apart from a woman of color who was appointed to a vacancy, none have been elected.

"There’s that transitional period that occurs in your community,” he said. “I see that progressing in our community further, but there’s still a ways to go.”

Unlike many of Minnesota’s majority-minority districts, Worthington has been undergoing these changes for a while now: “We get new immigrants all the time,” Landgaard said. “So for those folks, we understand what needs to be in place to support them. In some respects, we’re not as on the forefront of some of this, like some other districts may be.”

Learning with change in Bloomington

A half a century ago, Bloomington was a sleepy Twin Cities suburb, home to families that were almost exclusively white. Over time, Bloomington has become a more bustling — and more diverse — place: A decade ago, 36 percent of Bloomington students were students of color, according to data from the Minnesota Department of Education. This school year, 51 percent of students are kids of color.

“One of the benefits for us is that this has been something that’s been happening over time, so we’ve been able to adapt quite well,” said Andy Kubas, executive director of instruction for Bloomington Public Schools.

Kubas said one of the things he’s learned as Bloomington has become one of the state’s more diverse districts — more than 50 languages are spoken in students’ homes — is to not make assumptions about the experiences of students and families who come from diverse backgrounds.

When Kubas was the principal at Bloomington’s Valley View Elementary, he watched a little girl named Lupita, for whom English was a second language, listen as her third grade teacher read about a farm. At the end of the story, the farm’s pigs returned to their pen. “I watched Lupita pick up her pen on her desk, and I watched her look at it and think ‘How did all the pigs get in a pen?’”

The little girl’s logic made perfect sense, and he laughed about it at the time. But it also bugged him. Lupita probably hadn’t been to a farm in a place where pigs are kept in something called a pen. There was an experience gap there that gave her a disadvantage in understanding the story. 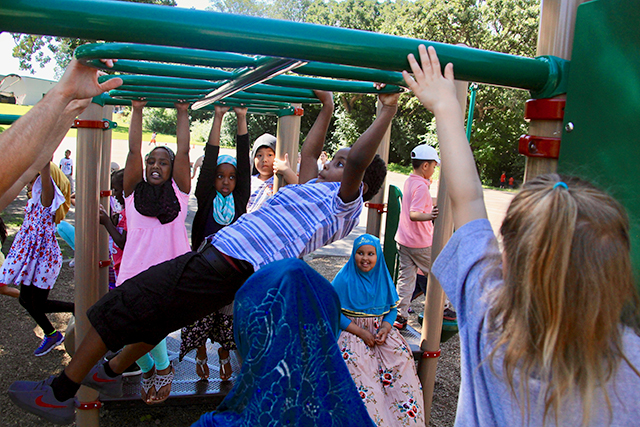 “We know about learning that you hang your new learning on what you already know,” Kubas said. “How many kids — these things we just think are normal to understand — does the learning go right over their heads because they don’t make that connection?”

So Bloomington schools aimed their summer school program at closing that experience gap. Summer school’s still centered around academics, but kids might also visit a farm or the zoo. “It’s so easy as someone who is familiar with the culture just to make the assumption that everyone understands what we’re talking about, and not everyone does,” Kubas said.

In St. Cloud, part of meeting the needs of a rapidly changing school district is bringing the community along.

A population center in fast-growing Central Minnesota, St. Cloud has become a destination for many immigrant families who come to the state, drawn by the prospect of living in a smaller city with a lower cost of living and a growing immigrant community.

That dynamic is reflected in the St. Cloud Area School District, where change has come fast: In 2007-08, 22 percent of the district was made up of students of color. Today, that figure is 53 percent. The population of black students, many of whom are immigrants or the children of immigrants from East Africa, is 37 percent — compared to 13 percent in 2007-08.

“Changes happen so rapidly that it’s hard to keep up,” said Sebastian Witherspoon, directory of equity services for the district. Still, he said, the district has adapted to give a good education to students no matter their needs, from Advanced Placement to English learners.

Part of the challenge for the district — operating in a city that is 80 percent white — is to dispel some residents’ beliefs about the city’s newcomers, Witherspoon said. Most notably: the idea that kids who aren’t fluent in English aren’t as intelligent as their native-born fellow students.

More than 2,700 out of about 10,000 students in St. Cloud’s public schools are English language learners, Witherspoon said. Though some of those students might score lower on standardized tests, that’s often because those tests are in English, a language they haven’t yet mastered. In many cases, English is these kids’ third or fourth language.

Because the city’s demographics have changed so fast, there can be tension between longtime residents and newcomers. In order to bridge that divide, last year the district started holding community cafes, where St. Cloud residents get together to talk about their similarities and differences. “(They’re) designed to have dialogue around our differences, to say we do have cultural differences but we’re not as far apart on these things as people think we are,” Witherspoon said.

So far, the feedback has been positive, though Witherspoon said many of the people who show up are already open to change, and he’d like to see more people who have trouble accepting differences attend.

For many districts, change begins well before the share of minority students exceeds 50 percent. How districts choose to adapt to better serve an increasingly diverse student body, however, varies from place to place.

The Pelican Rapids school district is undergoing a transformation as well — though on a smaller scale than some majority-minority districts. Located roughly 30 miles from the North Dakota border, the city of Pelican Rapids is home to a turkey plant that has attracted Latino families looking for work, and the district is now 46 percent minority. Latino students make up about 28 percent of the student population, with black students making up another 13 percent. In comparison, all neighboring school districts are still very white, Superintendent Randi Anderson says.

In some regards, the small size of district — there were a total of 880 kids enrolled last year — makes it easier to ensure none of these students slip through the cracks. Teachers  use small groups in the classroom and personalize learning, pulling individual students out of class for targeted interventions twice a day and monitoring their progress closely.

Heading into her third year with the district, Anderson says that one of the goals she has is to break down the barriers that seem to prevent some immigrant families from participating in extracurricular offerings, like sports and fine arts programs.

“The communities that have been here for two, three generations are probably more involved in our extracurriculars than our newcomers,” she said. “I think one of  the pieces we’re striving really hard for is to reach out to our Somali community to understand what their needs are and how can we get them more involved in some of the extracurricular activities.” 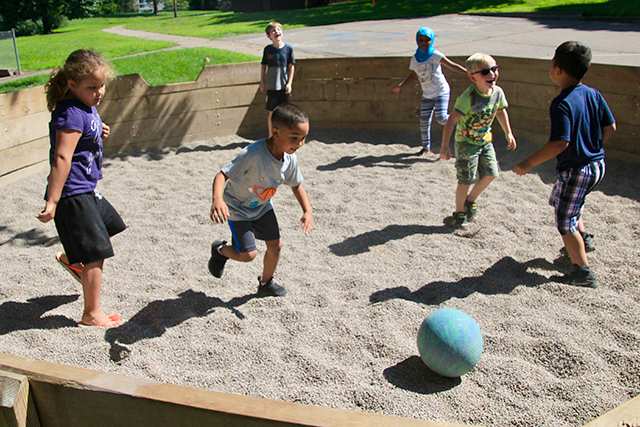 To support this effort, she says she’s been looking for a parent liaison to help bridge any communication gaps for the past two years, but has struggled to connect with one.

To help bridge cultural divides in the community, there’s a welcome committee that hosts lunchtime meetings and the library hosts multicultural potlucks. As a district, Anderson says they weave a number of community service opportunities into the school year as well. “Our elementary students will rake the yards of our elderly people,” she said. “They’ll go the senior citizen center and read books together.”

In the Long Prairie-Grey Eagle Public Schools district — a rural district of comparable size to Pelican Rapids — the district is adapting at an entirely different pace. With a student population that’s now 48 percent minority, the district is looking at projections for an incoming kindergarten class that will be “crossing a threshold,” said Superintendent Jon Kringen: 65 percent of that class will be Hispanic.

The district has long had a significant Hispanic population thanks to the presence of a meatpacking plant, with many workers’ families coming from central Mexico. But after Hurricane Maria, Kringen said, the plant began hiring more workers from the Dominican Republic and Puerto Rico.

The shift had ripple effect in the school district. “We had an influx of students of all ages, all grade levels,” he said. “Many didn’t speak any English. So we were challenged by the fact that we needed to educate our students not only needing to teach them English, but also needing to have them earning credits toward graduation. That was a significant change for us.”

In response to the increased demand, the district grew their English learner staff to five full-time employees, up from three full-time and one part-time English learner staff about three years ago. Because of a statewide shortage, they’ve had to take a grow-your-own approach to the positions — offering one of the jobs to a native speaker from Columbia who had a teaching degree in her home country; they also convinced an elementary teacher to go back to school to pursue an EL license.

To further bridge the language gap, Kringen also launched an incentive-laden initiative that’s open to all staff: a Rosetta Stone challenge to learn basic Spanish. So far, about 90 of the 150 district employees have signed up to participate.

“It’s change. It makes the job more challenging. Teaching is a very challenging profession as it is,” he said. “To throw additional challenges on to that, of course not everyone is going to appreciate that. But, as a whole, I think our staff have embraced it.”