News
Elections
Minnesota Credit Unions generously supports MinnPost's 2022 election coverage.
Aug. 8, 2022
When a Republican and a Democrat face off for a seat in the Minnesota Legislature, campaign financing is predictable. Less so when both candidates are Republicans competing in a primary.

There are GOP primaries in 26 Minnesota House and Senate districts this year, many of which involve different factions of the GOP that could shape the party’s ideological center at the Legislature next year. In many races, anti-establishment firebrand Republicans are challenging incumbent lawmakers or more conventional conservatives.

And while the candidates are from the same party and share many of the same priorities, there are still many political fault lines that divide them — and their funders.

The anti-establishment candidates, generally speaking, view the GOP as not conservative enough on certain issues. They tend to take stronger positions on fighting pandemic restrictions or a governor’s emergency authority, often advance election fraud conspiracy theories, and are more hard line in opposing government spending. Many bash compromise with the DFL and portray the Republican establishment as corrupted by lobbyist influence. Some support term limits or oppose “omnibus” bills that roll legislation into larger spending packages. 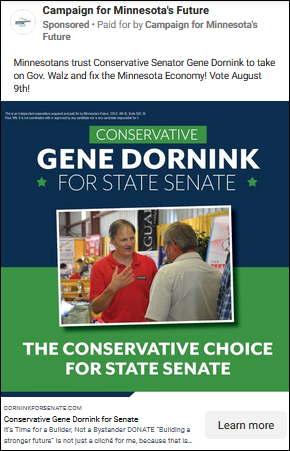 In turn, their Republican opponents, who might balk at being painted as centrists or part of the establishment, paint their opponents as bombastic, unrealistic, or too extreme.

Most heated Republican primaries are in the Minnesota Senate, though a handful are in the state House.

While candidates perceived as more traditional or moderate Republicans win support from traditional funders such as the Minnesota Chamber of Commerce, the anti-establishment candidates are often aligned with the far-right organization Action 4 Liberty, or anti-establishment Republicans like Reps. Steve Drazkowski, Jeremy Munson or Erik Mortensen. Drazkowski and Munson started a breakaway caucus in the House separate from House Minority Leader Kurt Daudt. 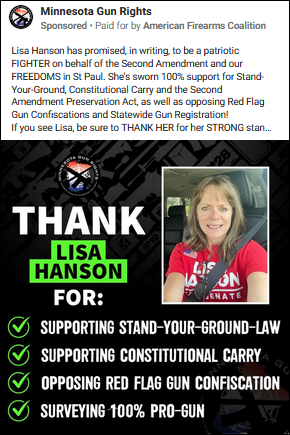 One primary is in southern Minnesota’s Senate District 23, which includes Albert Lea and Austin, where Republican-endorsed Sen. Gene Dornink is running against Lisa Hanson, who rose to prominence when she was jailed for defying Gov. Tim Walz’s pandemic restrictions on her restaurant.

In northern Minnesota’s Senate District 5, it’s the challenger – not the incumbent – who won the GOP’s endorsement. Sen. Paul Utke of Park Rapids lost the endorsement to Bret Bussman, who trains soldiers at Camp Ripley. Bussman says he wants to change Minnesota’s election system, citing the  false assertion that Donald Trump won the 2020 election nationwide and in Minnesota.

Another district where the GOP endorsed the outsider is Senate District 41 in the east metro, where state Rep. Tony Jurgens is competing with Tom Dippel, who touts the backing of Munson, Drazkowski and former Republican candidates for governor Neil Shah and Mike Murphy.

In the House, Mortensen – an incumbent who was ousted from that breakaway House GOP caucus –  is hoping to fend off a challenge from Bob Loonan, who formerly held the seat and is seen as more moderate. A Red Wing-area race between Republican Jesse Johnson and Drazkowski-backed Republican Pam Altendorf has been hotly contested, as well as a Stillwater-area contest between endorsed Republican Mark Bishofsky, who is backed by Action 4 Liberty, and the more centrist Tina Riehle.

Who is supporting establishment-friendly GOP

So far, a handful of groups have been funding incumbent lawmakers and establishment-friendly candidates. One is the Minnesota Police and Peace Officers Association, which gave $1,000 to Jurgens and three other candidates in House and Senate primaries.

Campaign finance data is only current through July 18 because of state reporting rules, meaning organizations could have donated or spent more on candidates than is publicly known. Some large donations after July 18 must be disclosed but not spending by independent groups.

Pro Jobs Majority, an independent expenditure committee affiliated with the Minnesota Chamber of Commerce, has spent perhaps the most money to boost incumbent candidates and more traditional Republicans in primary races. So far, the committee has reported more than $56,000 in independent spending.

That’s not much money when compared to cash that flows into top general election races. But it could still influence a primary race. Pro Jobs Majority spent money to help Utke and several other Republican Senators in districts where the GOP is favored in the fall general election, such as Eric Pratt, Gary Dahms and Mark Johnson.

The organization also spent money to boost Republican Rep. Ron Kresha in a House primary race, as well as Riehle and Jesse Johnson.

Another spender on behalf of Riehle and Johnson is the Coalition of Minnesota Businesses, which is an independent expenditure committee tied to the organization of large company CEOs called the Minnesota Business Partnership.

That cash has become an issue in the race between Johnson and Altendorf. The activist Facebook group Rocks and Cows of Minnesota recently posted a graphic accusing Johnson of being influenced by special interests.

Advance Minnesota, which has ties to Minnesota Senate Republicans, has put money into at least two primaries. The independent expenditure committee is funded largely by GOPAC, an organization that trains Republicans for elected office.

Advance Minnesota paid to boost Republican-endorsed Dan Bohmer in the Moorhead-area Senate District 4, where his opponent Edwin Hahn has alleged fraud without evidence after losing a 2020 state House race and has been mired in controversy in his local Republican party unit. Bohmer recently told Forum News Service that the 2020 election was not stolen. Hahn, who hasn’t reported raising any money, said it was.

The independent expenditure committee called Minnesota’s Future has spent more than $10,000 to help Dornink. The organization has in the past received significant funding from GOPAC and this year has reported modest donations this year from three financial companies based in Florida.

Other political groups, including the North Central States Regional Council of Carpenters, have made donations to establishment-backed candidates in contested GOP primaries. And a few outgoing lawmakers have given money to more traditional conservative candidates in primary races as well.

Sen. Paul Gazelka, the former Senate Majority Leader who unsuccessfully ran for governor this year, contributed leftover money from his campaign to Utke, Sen. Jeff Howe and House candidate Sheldon Monson. Retiring Rep. Barb Haley, who lost an endorsement fight for a Senate seat to Drazkowski, gave money to Pratt, Jurgens, Utke and Senate candidate Jordan Rasmusson, who is currently a member of the state House.

In the last two weeks, several Republicans in the more establishment-friendly wing of the party have received $1,000 donations from Winona radio station owner Jerry Papenfuss and/or manufacturing CEO Hugh Miller.

And the Minnesota Jobs Coalition Legislative Fund, which is associated with the House Republican Caucus, has been spending money on advertisements attacking some anti-establishment candidates, including Mortensen and (the GOP endorsed) Bishofsky.

There are fewer outside groups spending on anti-establishment Republican primary candidates.

Most candidates have reported some individual donations. But only one organization has reported significant spending on independent expenditures to boost the more MAGA-friendly candidates: Make Liberty Win.

The Virginia-based PAC has reported spending nearly $70,000 to help four Republican candidates. The most, $33,295, has been to aid Mortensen.

But the PAC also spent about $36,000 total to boost Dippel, Senate candidate Nathan Wesenberg and House candidate Chuck Parins. Parins is on the ballot against Kresha but announced he is no longer campaigning. Wesenberg is up against former lawmaker and U.S. Senate candidate Jim Newberger and Republican Steve Wenzel in Senate District 10, which includes Little Falls. The website of Wesenberg, a wildlife biologist, says he will stand up to Gov. Tim Walz’s new auto emissions standards, spending and mask regulations and “other atrocities that threaten your way of life.”

Utke and Dornink have ‘A’ ratings from the NRA and are endorsed by the group. Both also have an ‘A+’ rating from the prominent Gun Owners Caucus in Minnesota. But an Aug. 1 ad from the Ohio-based American Firearms Association said Utke is “refusing to push a vote on any pro-gun bills ever.” And a July 30 ad attacks Dornink for “refusing to fight to pass stand-your-ground law.”