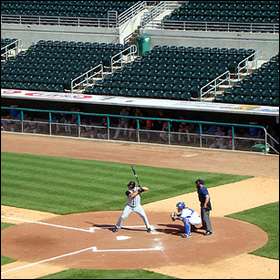 Courtesy of the Iowa Cubs
Because of worries about flooding and safety, fans weren’t allowed to watch the Triple-A Iowa Cubs baseball team take on Nashville at Principal Park near the flooded confluence of the Des Moines and Raccoon Rivers.

DES MOINES, Iowa — Among the many strange sights to be seen in the flooding in Iowa last week — pigs riding it out on the roofs of sheds, fishing boats in cornfields – was one sight that almost nobody saw.

That came when the Triple-A Iowa Cubs baseball team played the Nashville nine at Principal Park at the extremely flooded confluence of the Des Moines and Raccoon Rivers. No fans were allowed in. “Unprecedented,” Cubs outfielder Matt Murton told a local reporter. “Even when I was 5 years old, my dad used to watch me and my brother play catch in the back yard.”

“It was different,” said Scott Sailor, the Cubs’ director of logistics, with a shake of his head and with Iowa understatement.

A voluntary evacuation order had emptied downtown Des Moines; Friday’s game with Nashville was postponed and the Cubs already had doubleheaders scheduled for Sunday and Monday with the Sounds.

“We played the game to keep the players on a regular rotation,” Sailor said. “If the flood got worse, we didn’t want a bunch of people trapped.”

The few essential employees who attended waded through smelly, filthy waters in the parking lot and got a free tetanus shot for their effort. Two days of heavy sandbagging (144 tons of sand, 6,300 sandbags) by the staff, which included Eden Prairie native Corey Aldritt, a video production intern from Iowa State University, kept all but a trickle of water out. The warning track was wet all the way around.

Attendance? Maybe 20
The attendance was fewer than 20, including a few scouts. There was no local radio, PA, music, national anthem or concessions. Fans got a rain check and the whole scenario cost the owners, including former NBC president Michael Gartner, “well into the six figures,” Sailor said. The team originally expected a crowd of 10,000 to 12,000.

Pacific Coast League commissioner Branch Rickey told the local paper that he did not remember a game played when fans were not allowed in except once as a publicity stunt.

The game began at 4 p.m. so the stadium lights were not used and did not attract the curious.

The club, like many other downtown businesses, has kept many of the sandbags in place in case the rivers rise again. The rumbling of generators and a whiff of raw sewage still drifted over the field a few days later.

For the record, the I-Cubs bested the Sounds 5-4.