In the world of agriculture, when Monsanto speaks, farmers listen. It is one of the world’s largest agribusinesses, and while it has more than enough detractors, Monsanto does its homework.

Along with the University of Minnesota’s Nobel Prize winner Norman Borlaug, the father of the Green Revolution, Monsanto is one reason why food producers have been able to meet the needs of an exploding population, despite warnings that it couldn’t be done.

So, when the board of directors of Monsanto asked its scientists to figure out whether global warming was real, and whether it would cause problems for farmers, it got its answers. The answer was “Yes” on both counts.

One of those scientists was Dr. David I. Gustafson, a chemical engineer. Gustafson wrote an article for Pest Management Science outlining his findings. I found Dr. Gustafson at his office in Missouri. I asked the Monsanto senior fellow what conclusions he drew from his review of the science. Gustafson said: “We found very strong evidence that the basic theory of man-made global warming is true. It is warming the planet and we are already seeing significant shifts in planting zones here in the US and around the world.”

I asked him what that might mean for farmers. “We see significant changes in precipitation, and the rate of change will be even greater in the second half of the 21st century,” he said. Then the Monsanto scientist added: “We are going to need to use all the technology available to deal with the challenge of climate change.”

I was born at night, but not last night. Skeptics might say that Monsanto has a dog in this fight, and if farmers are frightened of climate change, they will be looking for genetically engineered products Monsanto will sell. I had to ask the question.

“I’m a scientist,” Gustafson said. “I’m not trying to sell any products. Now, it is true that some of Monsanto’s crop protection technology might be helpful in responding to the challenge of climate change, and it is true we are in a position to help. But this challenge is way bigger than one company or one industry.”

Here is a portion of what Dr. Gustafson wrote in his research article: “Crop productivity is expected to increase slightly owing to climate factors at mid to high latitudes until mid-century when excess heat will begin to harm yield…after mid-century, crops in all world areas are expected to be negatively impacted by changes in rainfall patterns – not only in terms of drought, but also in terms of heavy precipitation events and the increased frequency of storms.” 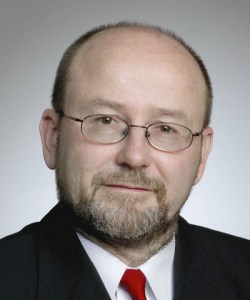 Gustafson believes precipitation, coupled with heat, will be the major problems. Heavy rains erode fertile soil. Lack of rain is worse. He says bugs and weeds, which are already on the move, will hinder food production. And, he warns, the bugs and weeds are moving north. Plant diseases are made worse by warmer temperatures, which he sees as yet another threat.

“We approached this very humbly,” Gustafson told me. “We see this as a challenge; not just to the ag sector, but to everyone. Personally, I try to keep this out of the political and business realm and focus on it as a scientific fact. We are just trying to get people to address this problem. We think it is very significant.”

Gustafson’s analysis, nonetheless, concludes on a note of guarded optimism, at least in the short term. The report states that the panel found agricultural production systems are secure and sufficient to meet the forecast pace of climate change “at least through mid-century.”

After that, Gustafson reports, things aren’t so rosy. “Beyond that time,” he writes, “modeling suggests that crop productivity in all regions could begin to be harmed by higher temperatures predicted for that period…unless successful greenhouse gas mitigation measures are implemented soon.”

Because it is an international company, Monsanto is concerned about agriculture all over the world. Some parts of the world producing a lot of food right now for a lot of people concern Gustafson.

“America has a lot of adaptive capacity, lots of good productive soil and water,” he said. “But there are countries around the world where that is not the case, and some of those countries have huge populations to support. Parts of Africa and Asia have less adaptive capacity to deal with the issue of climate change.”

Gustafson says that farmers have already learned to use a lot less fossil fuel and non-organic fertilizers. He says that more and more farmers are preserving soil by planting cover crops to hold the soil in heavy rains, and tilling techniques that do less damage and expose less of the earth to erosion. He urges an even wider acceptance of those practices.

Monsanto thus joins a growing list of some of the country’s largest businesses in taking seriously the science of climate change and are changing their practices accordingly.  In January 2007, the CEOs of ten of America’s largest corporations, including General Electric, DuPont, Alcoa and Caterpillar, urged Congress to pass legislation that would spur the growth the green technologies, and even demanded a cap-and-trade program on greenhouse gases.

Monsanto may just have planted its most important seed.

Monsanto asks its scientists if global warming is real