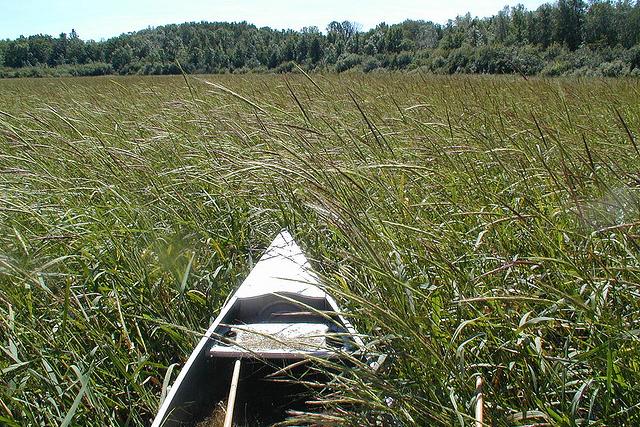 CC/Flickr/Eli Sagor
According to one of the chief researchers, sulfate doesn’t behave like a toxic chemical spill, killing plants overnight. But over time it produces a “slow unraveling of the population.”

Three years of ground-breaking research shows that Minnesota’s controversial standard to protect wild rice waters from sulfate pollution is close to the mark. Industry groups have challenged the standard, which was established in 1973 based on research from the 1940s.

Sulfate (a form of the element sulfur) occurs naturally but also comes from mines, wastewater treatment plants, and other industrial sources. If the state reaffirms the standard and begins enforcing it, mining companies may have to invest millions of dollars in sophisticated wastewater treatment systems.

The research, mandated by the Legislature in 2011, combined different approaches by several scientists, including a three-year field survey of more than two dozen lakes and rivers, controlled container experiments, and lab studies to nail down how and at what levels sulfate harms rice. According to one of the chief researchers, sulfate doesn’t behave like a toxic chemical spill, killing plants overnight. But over time it produces a “slow unraveling of the population.”

The results of the studies have been turned over to the Minnesota Pollution Control Agency, which will release its initial analysis on Thursday (Feb. 27).

[Update, Thursday, Feb. 27: The Minnesota Pollution Control Agency has unexpectedly postponed announcement of its preliminary findings on the controversial standard for protection of wild rice from sulfate pollution. The announcement was scheduled for Feb. 27, but in an email the agency said it was not ready to release its findings. The MPCA says it will provide an update “in the coming weeks.”]

John Pastor, a biologist at the University of Minnesota Duluth, has been growing wild rice in stock tanks for several years. Pastor says it’s not the sulfate itself that harms the plants. Rather, bacteria living in the oxygen-poor muck convert sulfate into sulfide, which scientists have long known interferes with plants’ respiration and nutrient uptake.

Adding controlled amounts of sulfate to the water in the tanks, where bacteria in the sediments converted it to sulfide, Pastor documented reduced plant growth at levels lower than the state’s standard of 10 milligrams of sulfate per liter of water.

“We found there really is no threshold at which sulfide becomes toxic,” Pastor said.  “As soon as you add any, you get a decline in growth rate.”

Later in the life cycle, Pastor found that plants in the higher-sulfate water produced fewer viable seeds for the following year.

Meanwhile, U of M researcher Amy Myrbo and a small army of graduate students paddled lakes and rivers across Minnesota to take water samples and measure the density of wild rice stands in nature.

Differences between lakes and streams

“We measured the heck out of stuff,” Myrbo said. The students captured almost 400 samples, and lab technicians analyzed nearly 400 factors. The detail was necessary because in nature, things are a lot more complicated than in stock tanks. For one thing, Myrbo found big differences between lakes and rivers. Some river stretches produce healthy stands of wild rice even with sulfate levels higher than the state standard. This is likely because the water is moving and well-oxygenated, the riverbed may be more gravel than muck, and the bacteria that convert sulfate to sulfide don’t thrive in those conditions.

But a real-world study can’t control for many of the factors that affect wild rice growth, such as changes in water levels, weather, and destructive pests. That’s why the research combined field surveys with lab experiments.

Nathan Johnson, who teaches civil engineering at the University of Minnesota Duluth, developed sophisticated new techniques to delve into the water chemistry in the top 10 inches of sediment, where plants root themselves. In Pastor’s tanks, Johnson found a direct correlation between sulfate in the surface water and sulfide in the porewater, the water that flows between the sediment particles and supplies the roots with nutrients (and poisons). And Johnson found a similar pattern when he studied a couple of Myrbo’s lakes and rivers.

Johnson and a graduate student also looked into the effect of temperature on sulfate behavior. The existing wild rice standard applies to “water used for production of wild rice during periods when the rice may be susceptible to damage by high sulfate levels.”  Some have suggested that if mine wastewater were dumped into streams only in the winter, it might not harm the rice. Johnson found that even at winter temperatures, most of the sulfate that moved into sediments changed into sulfide.

Perhaps not surprisingly, the vast majority of the sulfate, in warm weather or cold, remains in the water and gets flushed downstream. But there may be wild rice beds downstream too. For example, the St. Louis River estuary – the ultimate destination of most rivers that drain the taconite mining area — was once rich with wild rice, and the plant can still be found in some backwater bays.

The MPCA’s initial analysis will include a preliminary recommendation as to whether the new science suggests there’s a reason to change the standard, and if so, in what direction and by how much. It will also address the differences between lakes and rivers, and the question of cold-weather sulfate behavior.

After making an initial analysis, the agency plans to continue consulting with its advisory group and other stakeholders before a final decision is made. If the standard is to change, the rulemaking process requires public input, and the final standard must be approved by the federal Environmental Protection Agency.

The standard has only been enforced once in its 40-year history. But tribal groups have long complained that important wild rice beds they’ve used for generations are declining. Wildlife groups are also concerned because wild rice is a prime food for migrating waterfowl. Several years ago, after prodding by environmental and tribal groups, the MPCA began asking mining companies to monitor sulfate levels in their wastewater effluent. The agency plans to begin requiring companies to meet the standard when their permits come up for renewal.